Of Galaxies, Sprinkles, and Glazes: Lessons from the Donut King and Science Fiction’s Golden Age 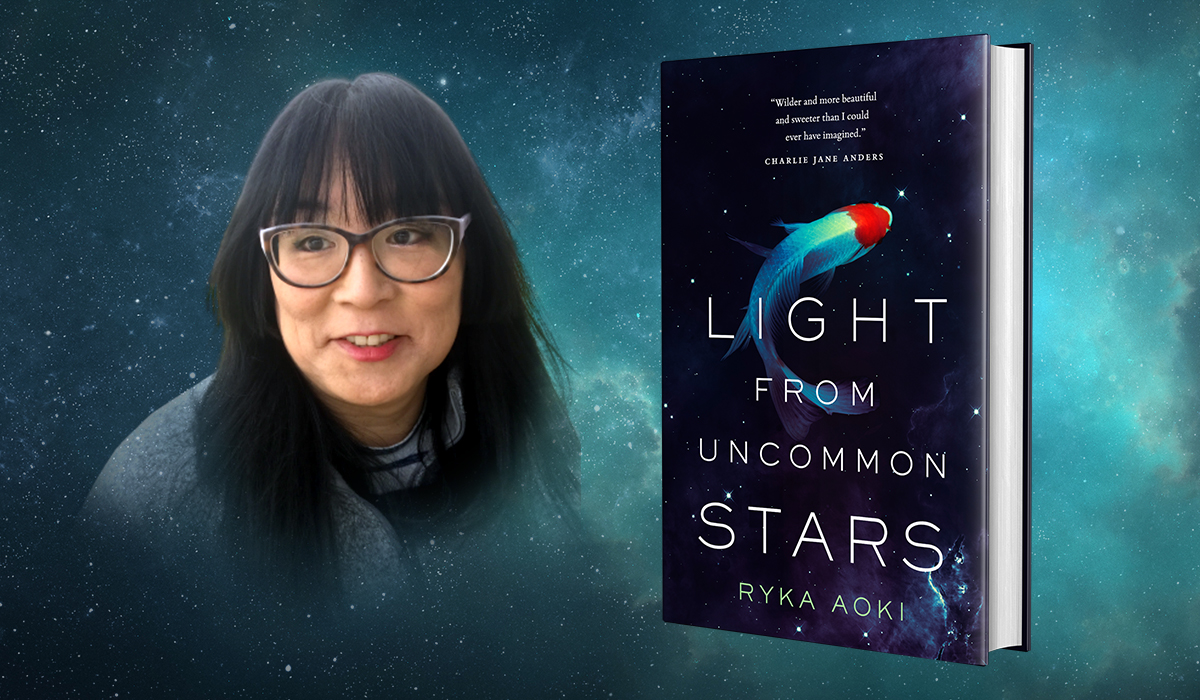 As a queer transgender writer of color, I’ve occupied my share of margins. I’ve saddle-stapled my own zines, published poetry and essays in small presses, queer presses…barnstormed across the country in fishnets and platforms, even worked in a dungeon on a road trip to replace a broken alternator. You want to talk queer theory? Pour me a Sazerac, pull up a chair, and let’s chat Judith Butler and Susan Stryker.

And yet, when it comes to writing, what truly encouraged me was Golden Age Science Fiction. Writers like E. E. “Doc” Smith, Frank Herbert, R. A. Lafferty, and Isaac Asimov may represent a hegemony that I am writing to outgrow, even bury—yet doesn’t erase all that I learned from them—the visions that could not have come from anywhere else.

But before we talk Asimov, we need to talk Ngoy. Ted Ngoy. Ngoy’s not a science fiction writer—he’s Southern California’s Donut King. In the 70s, a young Ngoy fled Cambodia and the Khmer Rouge and arrived in Southern California. Once settled in, he began working at, then managing, a Winchell’s Donut shop. This might have been a modest success story all its own—but while working for Winchell’s, Ngoy also gleaned all he needed to start his own chain of roughly 50 donut shops.

Much has been written about Ngoy; there was even a PBS documentary about him last year. But even before that, he was legend in our Asian-American community. For, through Ngoy, scores of Cambodian immigrants learned the world of yeast and flour, sprinkles and glazes, eventually running donut businesses of their own.

The term is “stealing books”—learning how a business is run from the inside out. Stealing books means working in someone else’s world, but learning all you can, so that one day you can create worlds of your own.

Which brings us back to Asimov, Smith, Herbert, and Lafferty….

I grew up at a time when Asians kids were told that we shouldn’t make trouble. That we should be quiet and study. I remember being told that we needed to be careful of police in certain parts of town (in many ways like the country is now). It was very rare to hear somebody say dream. Write whatever you want. You can do it.

Yet, there was Doc Smith smashing planets together—Asimov was destroying an entire civilization in a single short story. On Arrakis, Herbert was freaking me out with worms and spice, and Lafferty—who knew what Lafferty was doing? But wow, it was amazing!

To a misfit Asian kid doubting that becoming a writer was even possible, the sheer exhilaration of stepping eons and realities away—the utter grandness and magnificent arrogance of it all—those were my donuts. Yes, I enjoyed Star Trek and Space 1999. And I even enjoyed Star Blazers, and Yusha Raideen and some of the older anime pioneers. But VCRs were brand-new and very expensive. There was no Internet. And so, television was ephemeral. Once a show was watched it was gone—and if you wanted to rewatch anything, you had to catch a rerun (and remember Star Trek was off the air for many years.)

But with books, I could go back to them and study. I could learn. Because I could go back and look and examine. I could fall asleep with the books and wake up with them and think about them and play the stories in my head…Herbert’s descriptions, Asimov’s logic, Smith’s goofy innocence, Lafferty’s storytelling…I tried to bring all of them—with varying degrees of success—into my work.

Stealing books is more than merely acquiring techniques, though. In fact, what was more important was that I was also imagining what was possible. More than simply learning to parrot how a business is run, stealing books allows me—I think for the first time—to imagine myself succeeding. Imagine, having your name printed in shiny color on a book! That would mean someone had to know your name to do it, right?

OMG…just imagine. How much fun would that be?

But by that logic, I would have been writing and publishing in this genre for years now. The fact is, I’ve taken a roundabout course for a reason. Science fiction and fantasy publishers have made some wonderful strides to diversify their lists of authors, but it was not that way for so many years.

And if I had a dollar for every time suggested that I write more like Amy Tan….

I tried not to think about it. Instead, I concentrated, at first on poetry, then on performance pieces, essays…. All of which I enjoy, very deeply; in fact, I consider myself a poet first and foremost.

Along the way, I also learned of icons like Ursula K. Le Guin and Octavia Butler. But by that time, I was writing about work that explicitly addressed who I was, and what was going on with my world. Not any make-believe world, but my real trans queer one where I had lost so many friends due to violence and suicide and HIV. And not even Le Guin or Butler were covering anything close to that.

Let’s not even talk about transgender protagonists—when were the lead characters women? Gay? When were they Asian? Because, although stealing books allows you to see what’s there, it also reveals what’s missing.

Yet, even as my poetry got more pointed, even as my short stories grew more urgent, I realized that I was still indebted to these books I had escaped to as a child. My first novel, He Mele A Hilo: A Hilo Song, is classified as “magical realism,” but I’ll be damned if it isn’t very close to fantasy. In fact, it’s in the same universe as Light From Uncommon Stars.

If setting that book on an island that was my parents’ home, not my own, seemed presumptuous? Well, that seemed far less daunting when recalling Asimov’s expositions on robotics or Herbert’s Bene Gesserit. And if my method of storytelling was a little poetic? There was Lafferty’s spinning a yarn about God-knows-what.

Not only had I been influenced by them, but their exuberance—their daring—was something that I hungered for. Their dreams and expanse.

And yes, the fun.

And part of me thought, if they can do it, why can’t I do it, too? Because, you know what? Queer folks need donuts, too.

And I thought of Ted Ngoy. He operated within his neighborhood, not out of altruism, but out of necessity. Explicitly recreating Winchell’s was never his goal. Instead, he filled his shops with people he knew, who spoke his language, who looked like him. And because of this, to this day, long after the collapse of his own personal fortune, Cambodian donut shops have become an indelible part of our landscape, a vital part of what makes Southern California, well, Southern California.

I think that, from the moment that I was first enraptured by the tales of Lensmen and Arisia and Eddore, part of me was thinking that it would be so cool to write similar tales of my own.

I don’t know if I’ll ever be able to rival the work of Smith or Herbert or Asimov. I know I will never match R. A. Lafferty’s inimitable voice. But each of them has undeniably made me a better, more expansive, and confident writer.

And to be honest, I would challenge any of them to write about queer kids in Monterey Park.

Perhaps it was when I fully realized this, that I gave myself permission to express and inhabit my universe—to open my own literary donut shop.

And I think this is the perfect time to do so. Because I’ve been far from the only one stealing books. More queer and trans and POC voices have become successful, even bestselling authors. Readers can easily find work by TJ Klune, Rachel Pollack, and Charlie Jane Anders. Writers like Nghi Vo, Shelley Parker-Chan, Everina Maxwell, and S. Qiouyi Lu are creating amazing, visionary work that acknowledges and includes the people and souls that I love.

So, when people question if straight dead white male writers can teach us—I am thinking, gosh, they had better teach us. A writer with privilege can do a lot with privilege.

And even though we might not share (nor even want to share) that privilege, we can learn what they did, how to do it, and how to present it—then say thank you, and create universes that are filled with the magical, colorful, otherworldly…pages of dreams that are finally and truly our own.

Get your copy of Light from Uncommon Stars here

Shizuka Satomi made a deal with the devil: to escape damnation, she must entice seven other violin prodigies to trade their souls for success. She has already delivered six.

But in a donut shop off a bustling highway in the San Gabriel Valley, Shizuka meets Lan Tran, retired starship captain, interstellar refugee, and mother of four. Shizuka doesn’t have time for crushes or coffee dates, what with her very soul on the line, but Lan’s kind smile and eyes like stars might just redefine a soul’s worth. And maybe something as small as a warm donut is powerful enough to break a curse as vast as the California coastline.

As the lives of these three women become entangled by chance and fate, a story of magic, identity, curses, and hope begins, and a family worth crossing the universe for is found.

RYKA AOKI (she/her) is a poet, composer, teacher, and novelist whose books include He Mele a Hilo and two Lambda Award finalists, Seasonal Velocities and Why Dust Shall Never Settle Upon This Soul. Ryka’s work has appeared or been recognized in publications including Vogue, Elle, Bustle, Autostraddle, PopSugar, and Buzzfeed. Her poetry was featured at the Smithsonian Asian Pacific American Center, and she was honored by the California State Senate for “extraordinary commitment to the visibility and well-being of Transgender people.”