Our Books, Our Shelves: A.K. Larkwood & Tamsyn Muir in Conversation 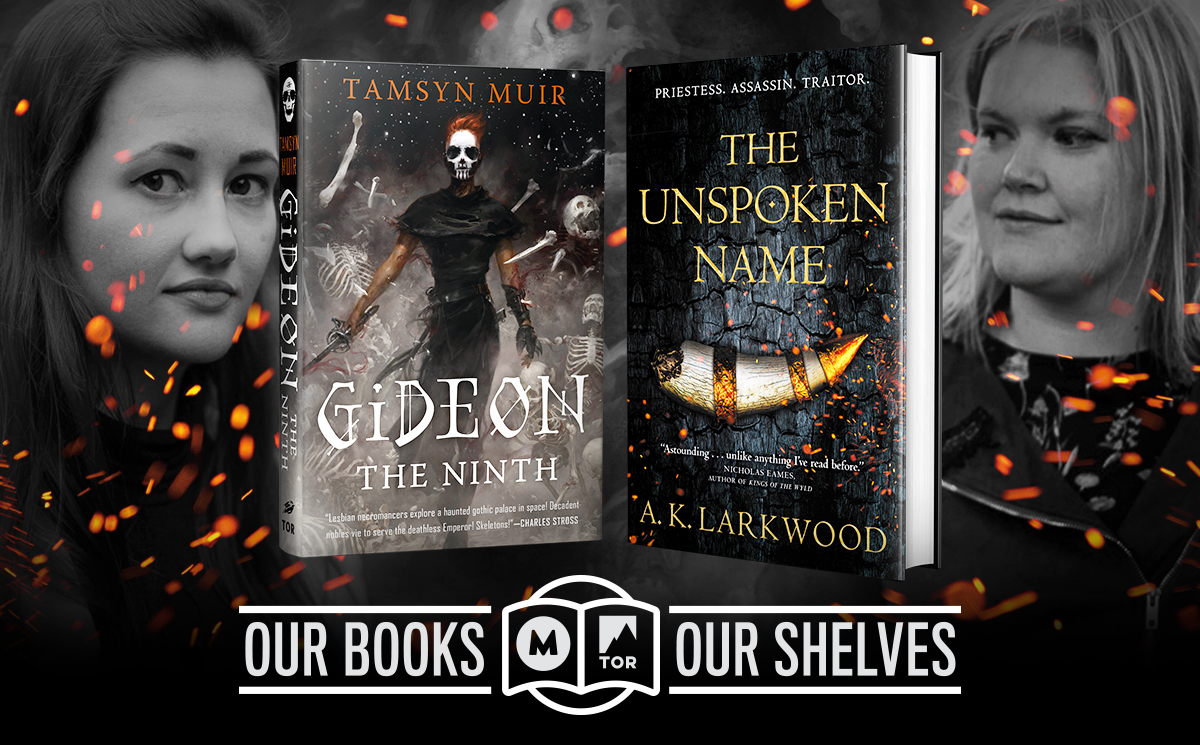 Tor Books has partnered with The Mary Sue on a brand-new bimonthly column for book lovers. We can think of no better way to kick off this partnership than a dialogue between two of our favorite authors—Tamsyn Muir, author of the best skeleton-filled space opera ever, Gideon the Ninth, and A.K. Larkwood, whose sword-wielding orc assassin/priestess John Wicks her way across the galaxy in The Unspoken Name. But we’ll let them speak for themselves …

Gideon the Ninth and The Unspoken Name are both hot takes on science-fantasy epic, fantasy on first glance and inarguably sci-fi on the second. They’re both about lesbian badasses with swords in a world where they would never describe themselves as lesbian; they are one among normalised LGBQT+ lead casts – not just LGBQT+ heavy lead casts, but LGBQT+ lead casts, period. They’re books about the perils of devotion and the things we tell ourselves about duty and sacrifice. Csorwe, the lead of The Unspoken Name – though just in saying that Talasseres Charossa, the other main character, is suing for top billing — is the assassin devotee to the world’s most dubious man. She falls for a purse-mouthed magician girl of surpassing power.

The Unspoken Name feels like a classic but also incredibly fresh.

You and I actually rarely have serious writing conversations. We have talked loads about books and what we liked in them, but we don’t often talk about craft. I know this is because we worry that our spouses will die of boredom, but I also think it is because you and I have so many opinions that we don’t know where to start. Does a character like Csorwe belong in SFF epic? We won’t even start with Tal.

I’d love to claim it’s out of consideration for our spouses but in reality it’s probably because you know I would ONLY want to ask you about what little shops everyone in Gideon would own, if they owned little shops.

So – one of the things I like most about SFF is the capacity it has to make familiar things strange and strange things familiar. Csorwe is brought up in an isolated cult worshipping a god of entropy, and it’s completely normal to her that the dead walk and that she’s expected to serenely die at the age of fourteen. Then she gets to explore the wider world and has some trouble getting to grips with this thing you call shopping. I really like this as a technique for intersecting worldbuilding with characterisation – shading in the boundaries of the setting not just by filling in what the character knows but by leaving blank space for what they don’t understand or can’t imagine. (I mean, you know this already, given that one Gideon Nav famously struggles with “salads” and “a swimming pool”).

Am I allowed to ask questions???

If you could see Gideon the Ninth adapted into any medium, what would you choose? I’m holding out for a Clue-style board game, tbh.

Christ, I was trying to be an intellectual powerhouse. I was talking about epic. Anyway, naturally I want Gideon the Ninth to be done up all video game Harvest Moon-style, you’re planting snow leeks every day in the bone fields, you’re giving babes Cake in order to get them up to full hearts – bone Cake – but then come winter it unexpectedly turns into a tactical murder scenario. Gone are Cakes, gone are babes. All that’s left is blood … and snow.

Also you can marry a girl and have a little wedding ceremony and pick out a little pixel dress!!

Actually, maybe this is relevant. I love the intersection of worldbuilding with characterisation. I was about to suggest what kind of game I wanted The Unspoken Name to be (it needs to look like, and play like, 1992’s Indiana Jones and the Lost City of Atlantis) but we’re the game generation. I love the ways in which you characterise Csorwe through fighting and through her first brushes with violence, and Csorwe herself is a character I never would have met as a child – she’s an impossibly bad-ass, graceful fighter, multi-talented, hugely reactive. A be-tusked John Wick. What’s a fight in The Unspoken Name that you think is hugely characteristic of Csorwe?

“Be-tusked John Wick” is absolutely the nicest thing anyone has ever said to me, how dare you!

Second of all I thought I was going to have to think hard about your actual question but it’s absolutely either the first fight in the book or the last one! Without too much detail because they’re both plot-heavy, they’re also both duels in which Csorwe throws herself into the fray intending to protect someone, regardless of whether this is a good or survivable idea. The hope is that she’s learned something about when it’s worth sacrificing herself and what that means.

Luckily my love of cool swordfights is balanced by the fact that I find writing them to be a penance and a strain, or the book would be nothing but stabs. Your fight scenes are both crisply paced and extravagantly weird so you’re clearly doing something right, but is it the result of hated struggle or have you somehow found a way to enjoy them?

Thank you very much for using the words ‘crisply’ and ‘weird’ together. Regarding fighting, I love and hate writing fights. I love thinking of the fight I am going to write, and then I hate writing it, which is a problem.

In your mind what’s your biggest writing flaw?

So when I was at school I used to make comics.

I started writing longform prose when I was about 16 and my reaction was just “do you mean to tell me I can just say there was a fucking chandelier there and I don’t have to draw it???? I am going to put three chandeliers in EVERY ROOM.” I don’t think I’ve totally recovered from this.

The big challenge is recovering the actual emotional arc from where it’s embedded in the elaborate chandelier machine that I have contrived. Especially so when writing SFF epic because you are working with this tremendous canvas.

This is something I thought about a lot while working on the sequel to The Unspoken Name. I’ve been lucky enough to have an early read of Harrow the Ninth (and can report that it slaps) and I’ve been interested to know how you found that sequel-writing process – Gideon’s voice is such a distinctive aspect of the first book, so was it difficult to write the same universe from a different point of view?

I hated going into the sequel of Gideon because I already knew I wanted to do something very different. I think people just don’t talk in general about how gruesome it is sitting down to a sequel. When I was writing Gideon I was writing it in blissful ignorance of what anybody would think of it. Being told that your work is ‘original’ means you immediately become drenched in sweat at how to keep being ‘original.’

I can say that going into the third book of the trilogy it is different all over again, because I no longer am panicked about disappointing people. They know what my nonsense is.

I always wanted The Unspoken Name to be a standalone story, and I was REALLY determined to do the same thing with the sequel while still stepping up the stakes.

Final question: you’ve always had a way with monsters. I’m very grateful for you for making zombies scary again. What’s your favorite monster in The Unspoken Name canon?

It’s the Mouth of Radiance, right??

The Mouth of Radiance was actually a last-minute addition! Until something like the sixth draft its role in the story was played by some shitty lions.

Jesus. I can’t even imagine what that scene would be like if it was lions and not the Mouth of Radiance.

I learned a valuable lesson which is if you have even the most fleeting opportunity to include a shambling body horror nightmare you should snatch it hard and fast.

I’ve been thinking a lot lately about the changing role of the monstrous in SFF, how it’s now almost jarring to read something where weirdness and monstrosity is the enemy rather than, shall we say, the locus of interest.

With all that said, my favourite monster is Atharaisse, who is a talking snake the size of a double decker bus.

A.K., thank you so much for letting me clown on you in a professional context. It’s all I ever wanted, so I’m grateful you wrote a whole very good book so that I got this opportunity. No matter what the publishing world holds, you’ll come out with the most important thing intact — your ability to draw an exquisite chalice.

Please let me repeat: The Unspoken Name is a top-notch entry into the epic fantasy canon. I cannot possibly be convincing enough in its favour. Read it.

A.K. LARKWOOD studied English at St John’s College, Cambridge, and now lives in Oxford with her wife and a cat. The Unspoken Name is her debut. You can find her online at www.aklarkwood.com and on Twitter as @AKLarkwood.

TAMSYN MUIR is the bestselling author of The Locked Tomb trilogy, which began with Gideon the Ninth and continues with Harrow the Ninth in June 2020. Her short fiction has been nominated for the Nebula Award, the Shirley Jackson Award, the World Fantasy Award and the Eugie Foster Memorial Award. A Kiwi, she has spent most of her life in Howick, New Zealand, with time living in Waiuku and central Wellington. She currently lives and works in Oxford, in the United Kingdom. You can find her on Twitter @tazmuir.