Our Books, Our Shelves: On Persistence, Nearly Giving Up, and Writing On 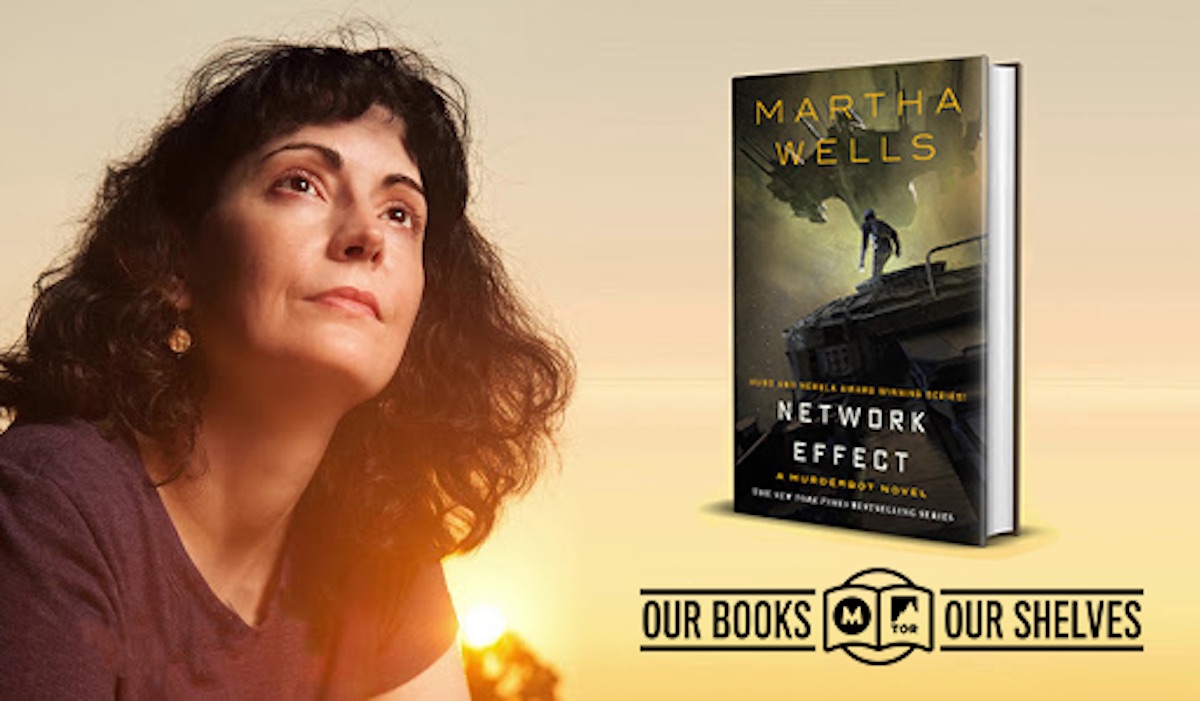 After the release of her latest novel Network Effect, Martha Wells muses on the bumpy road of a professional writer.

Sitting down to write about persistence in a professional writing career in this our year of 2020 is an experience, I tell you. All I can do is talk about my own experience of when I decided to give up.

In the early 90s, I sold my first two fantasy novels to Tor Books, then the next two to Avon Eos. My third novel was The Death of the Necromancer which was a finalist on the Nebula ballot for 1998. Things were going well. Then, Avon Eos was bought by HarperCollins, and things started to go downhill. My first trilogy, the Fall of Ile-Rien, contracted by Avon Eos before the sale to HarperCollins, was put on a raft and pushed gently out into the sea/market to sink without a trace.

In 2006 and 2007 I had short stories, two tie-in novels, the last book of my trilogy, and non-fiction articles published. But after that, I couldn’t sell any new work.

I still wanted to be a professional writer, it was all I’d ever wanted. But I had just left a toxic day job environment, and my depression and anxiety were just getting worse. I tried to start new novels, but they died in the first few chapters. I went back to writing fanfic, which made writing fun again. Then, I started The Cloud Roads and something finally clicked. I wasted a lot of time querying an agent who had solicited me when The Death of the Necromancer came out, only to be finally dismissed by an assistant who said they were only interested in books by established authors.

I went to a writer friend for recommendations and finally found an awesome new agent. But publishers were not interested in The Cloud Roads. As the book made the rounds collecting rejections for two years, I still kept writing, and worked on The Serpent Sea, and Emily and the Hollow World. I had opportunities, but nothing seemed to pan out. This was hard on me, even though circumstances of my life have made me somewhat used to pushing to do things that other people didn’t want me to do. I’m an emotional abuse survivor, and my coping mechanisms are many and varied. But there are things I can’t handle that other people are able to shrug off.

I was still going to a couple of local conventions but didn’t have any money to travel to bigger out of state shows, no way to remind people in publishing that I still existed. I had interactions that made it clear I was expected to maybe self-publish a little and then go away, emphasis on the go away. I started to believe them and give up. The toll on my mental health was getting higher. I knew it was time to give up. I canceled appearances at upcoming conventions and tried to figure out what I wanted to do with my life.

Then, The Cloud Roads sold to Night Shade Books in the summer of 2010 and I was back, sort of. Nobody seemed to remember my previous books, and it was like having a debut, except there was no “new writer” excitement. It was months before I even heard anybody I didn’t know personally mention reading the book. It was a long hard climb back up the hill, and a couple times I nearly got thrown off a cliff, but I made it, and much further than I ever thought I would. I don’t feel triumphant, I feel lucky. There are other writers who should be here too.

You don’t have to be a pro writer to be a writer. A lot of writers never sell their work and get a lot of enjoyment and fulfillment out of it. But if you want to be a pro writer and reach a large audience, it can be a long and painful road, and you may never get there.

It’s easy to tell someone to persist, to pull a Captain America “I can do this all day,” but Steve Rogers really got the crap kicked out of him in that scene. There are people (in your life and outside it) who will want you to stop writing, because the very act of writing itself is something they (for reasons of their own) can’t stand to see you do. (I’ve written a whole essay on People Who Want You to Stop Writing.) And there’s that whole category of People Who Are Happy to Take Your Labor But Don’t Want You to be Paid, and also the People Who Would Be Happy if All Creative Art was Produced by Those Rich and Privileged Enough Not to Need to Profit From Their Work. And it is so much worse for people of color, for LGBTQIA people, for anyone who doesn’t fit the image of a Rick Castle, basically.

Writing is about digging around in yourself and pulling things out. The only special thing about our work is us, what our own unique brains and personalities and experiences bring to the table to make the stories new. That’s where the answer to whether you should continue to persist or not needs to come from, from you.

Good luck. I’m rooting for you.

MARTHA WELLS is the author of the New York Times and USA Today-bestselling Murderbot Diaries series, which has won the Hugo, Nebula, Locus, and Alex Awards. She is also the author of many fantasy novels, including The Wizard Hunters, Wheel of the Infinite, the Books of the Raksura series (beginning with The Cloud Roads and ending with The Harbors of the Sun), and the Nebula-nominated The Death of the Necromancer, as well as YA fantasy novels, short stories, and nonfiction. Her books have been published in sixteen languages. Wells’ new novel, Network Effect, is available now from Tor.com Publishing.