Come for the Worldbuilding, Stay for the Character Development: Brandon Sanderson’s Rhythm of War 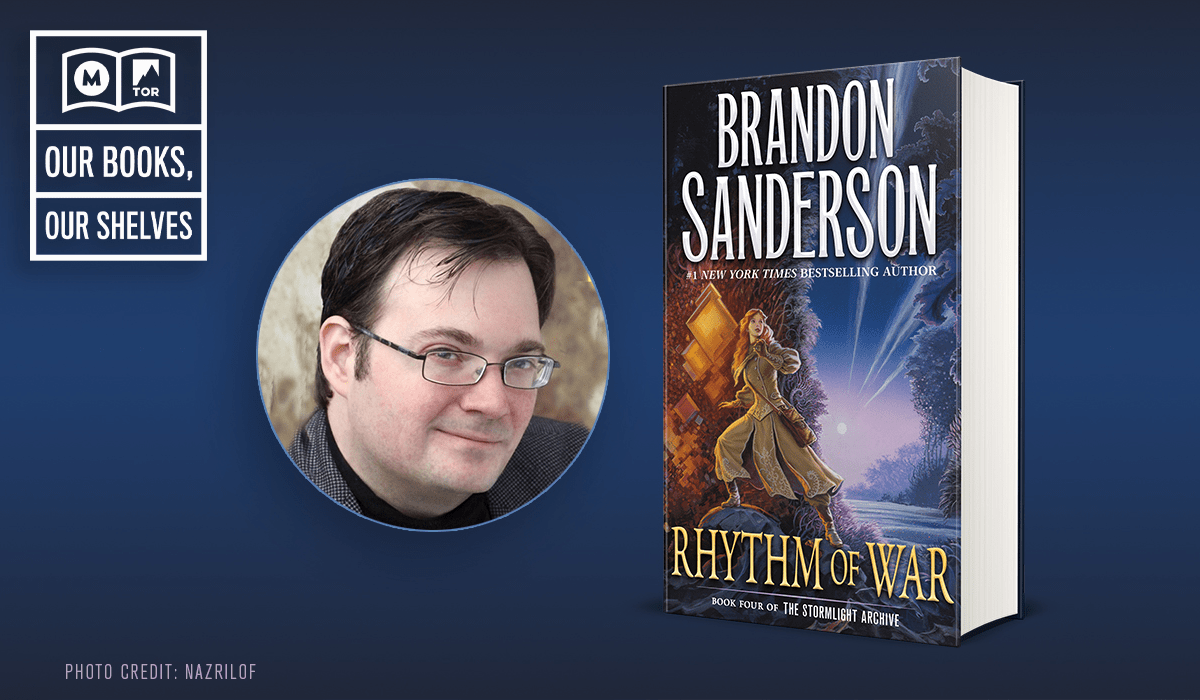 #1 New York Times bestselling author Brandon Sanderson is best known for his expansive worldbuilding— particularly the universe called The Cosmere, which has its own detailed magical system and spans across several planets, as well as several different series. The Stormlight Archive is Sanderson’s flagship saga, encapsulating the epic scale of the world of Roshar.

Intricate and expansive worldbuilding, however, isn’t the only thing that’s so great about The Stormlight Archive. For many, it’s the characters and their struggles that make the series so compelling. So while many were first drawn to the series because of the worldbuilding, they stay and eagerly await the next book because they care about the characters.

Since Rhythm of War, the fourth volume of The Stormlight Archive, has just been published, it’s worth taking a closer look at three protagonists who are as complex and nuanced as they are powerful.

Shallan Davar: Shallan is a young woman who, at the beginning of Rhythm of War, has come into her own as a powerful Knight Radiant: a lost order of people who can harness magic. Shallan has many magical talents including Lightweaving, where she creates increasingly lifelike illusions. Part of what makes her such a compelling character, however, is how she uses her magic to protect herself psychologically.

Using her illusions, she creates separate personas to help her deal with the different challenges she faces. Veil, for example, is a capable thief and spy and is much more daring than Shallan, while Radiant is a more confident version of herself. At the end of Oathbringer, the book preceding Rhythm of War, Shallan’s personas have taken on lives of their own, and Shallan has had to reign them in and try to accept them as part of herself. How she handles this in Rhythm of War is something many readers are eager to find out.

Kaladin Stormblessed: Kaladin has been through immense hardship and loss; early on in the series, he is a former slave sent to a likely death as part of an army regiment with a near-100% fatality rate. Through grit and his leadership, however, he transforms his regiment and ultimately becomes a powerful Knight Radiant. Kaladin is far from a flawless hero, however; he holds animosity toward lighteyes—the group who hold power in this society—and he suffers from bouts of depression and anger. It’s these jagged edges of his character, however, that make everything he goes through so heart-wrenching. He, like all of us, is a person with flaws, and his constant struggle to do what he thinks is right is one many readers relate to.

Jasnah Kholin: Jasnah has one of the strongest personalities in The Stormlight Archive. She’s a Knight Radiant and a Queen, yes, but she is also a scholar, a woman dedicated to facts. In a world where religion holds power, she is viewed by many as controversial and even heretical, similar to how some view Yennifer in The Witcher series. The resistance Jasnah faces, however, is what makes her a favorite of many—in the face of adversity, she persisted.

These are just three of the many characters fans have come to love in The Stormlight Archive series. There are literally dozens more that have their own backstories, idiosyncrasies, and struggles that make them come to life on the page. One (or many of them) may speak to you, and you can become immersed in their personal journeys as well as the broader world of Roshar in all four of the books published to date.

The Stormlight Archive continues in Rhythm of War, the eagerly awaited sequel to Brandon Sanderson’s #1 New York Times bestselling Oathbringer, from an epic fantasy writer at the top of his game.

After forming a coalition of human resistance against the enemy invasion, Dalinar Kholin and his Knights Radiant have spent a year fighting a protracted, brutal war. Neither side has gained an advantage, and the threat of a betrayal by Dalinar’s crafty ally Taravangian looms over every strategic move.

Now, as new technological discoveries by Navani Kholin’s scholars begin to change the face of the war, the enemy prepares a bold and dangerous operation. The arms race that follows will challenge the very core of the Radiant ideals, and potentially reveal the secrets of the ancient tower that was once the heart of their strength.

At the same time that Kaladin Stormblessed must come to grips with his changing role within the Knights Radiant, his Windrunners face their own problem: As more and more deadly enemy Fused awaken to wage war, no more honorspren are willing to bond with humans to increase the number of Radiants. Adolin and Shallan must lead the coalition’s envoy to the honorspren stronghold of Lasting Integrity and either convince the spren to join the cause against the evil god Odium, or personally face the storm of failure.

BRANDON SANDERSON grew up in Lincoln, Nebraska. He currently lives in Utah with his wife and children and teaches creative writing at Brigham Young University. He is the author of such bestsellers as the Mistborn trilogy and its sequels, The Alloy of Law, Shadows of Self, and The Bands of Mourning; The Stormlight Archive novels The Way of Kings, Words of Radiance, and Oathbringer; and other novels, including The Rithmatist, and Steelheart. In 2013 he won a Hugo Award for The Emperor’s Soul, a novella set in the world of his acclaimed first novel, Elantris. Additionally, he was chosen to complete Robert Jordan’s Wheel of Time® sequence.