Our Books, Our Shelves: RIP, IRL—Fandom Has Always Lived Online 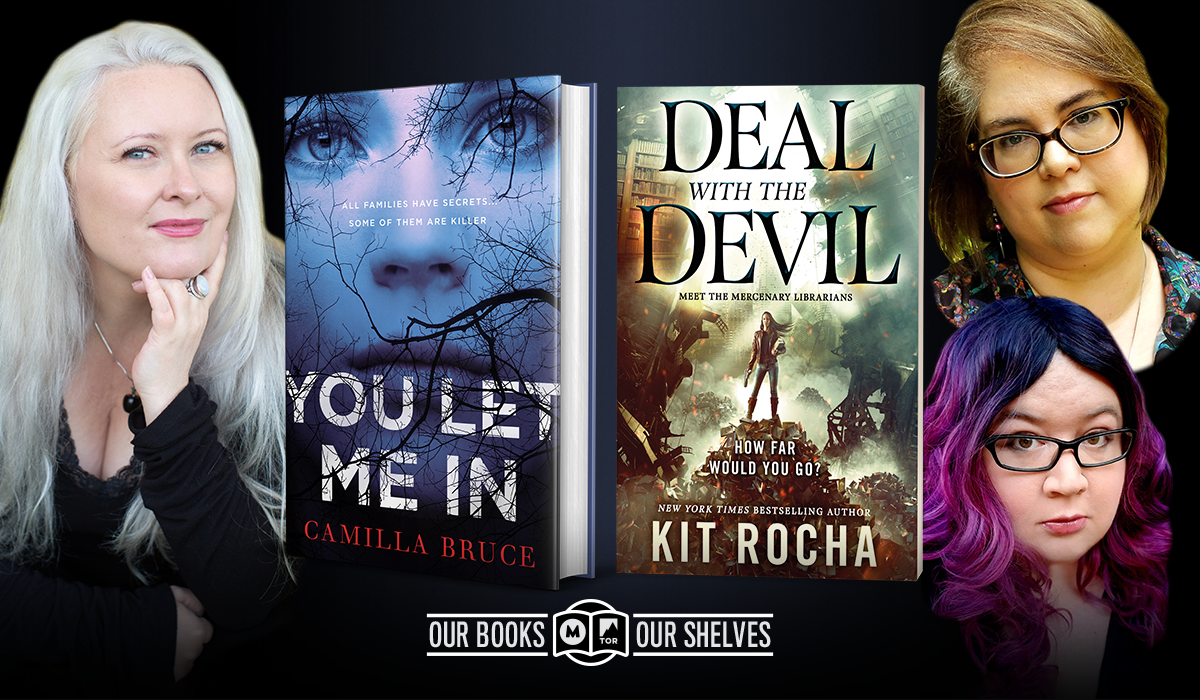 Friends, we’re gathered here today to lay to rest one of the great acronyms of our time, one of the original founders that stood alongside such notables as AFK, BRB, and A/S/L.

Today, in May of 2020, we say goodbye to IRL. Thanks to the not-so-slow creep of technology and the swift and brutal pressures of a global pandemic, the need to differentiate between things that happen in the “real” world and things that happen “online” has finally imploded.

The internet is officially real life.

The thing is, for those of us who were raised by fandom, it kind of always was.

Camilla: My fandom history—or writing history, really—started in 1998, when I found myself a young, housebound single mom with a very limited social circle. Two things saved my sanity back then: a second-hand computer with a dial-up modem and nightly reruns of Buffy the Vampire Slayer.

Discovering fandom was a revelation to me, and especially fan fiction was exciting for someone who had always loved writing. Before long, I was merrily typing away and found a new, vast community in the process. Since I am Norwegian, I also had to learn to write stories in English; a habit I kept when I transitioned to original fiction.

Kit Rocha: Our paths to fandom started in the ’90s, too. We both had our own initial gateways to fanfic—Bree was deep into the Star Wars prequels and Donna was more invested in aliens here on Earth, via X-Files and then Roswell. Discovering that you could log online and find people who loved your thing as much as you did was a revelation for us, as well.

An entire community of people who wanted to obsess over tertiary and one-off characters no one else had ever heard of, or nerd out about the tiniest details of a fictional world? For a nerd trapped in a small town, that can be life-affirming. And it never felt any less real because it existed on the internet.

Camilla: I cycled through several fandoms in my twenties, and found that my friendships online were just as valuable as those in real life. I had quite a few close ones that lasted for years, and also went to conventions in the UK and Germany and met some of my online friends there.

When I gradually eased out of fandom to write my own things, I joined a zine online. One of the artists there, Liv Lingborn, was Swedish, and we had a lot in common. We were online friends for a couple of years before we met—chatting only in English for some reason, though we understand each other’s languages just fine. Twelve years ago, she moved here, and got an apartment in my (then) building. She is still here, and we are still close friends.

Kit Rocha: In 2000, a little movie called X-Men rolled onto the scene, launching the next stage of our pop-culture love affair with superheroes. We crashed into each other when Bree leapt into a fight to defend Donna’s honor, with zero clue that we were about to establish a friendship that would literally alter our lives and careers. At the time, even explaining that you met your best friend on the internet was awkward—the first question out of everyone’s mouth was always, “But have you met them? You know? Face-to-face?”

Camilla: When Liv first moved here, online dating was already a thing, but online friendships were mostly unheard of—and people absolutely thought it was weird when we said we had met online. I remember it felt very special to have a friend in close proximity who also shared my online life.

One of the things that made us ‘click’ from the outset was that we had very similar tastes in books and movies, and for the first few years of our friendship, we did several creative projects together—sometimes just for us, other times for money. In 2012, we co-founded a small press, Belladonna Publishing, which published a couple of anthologies. Working with other people’s stories was what inspired me to focus on my own writing in earnest, so I may not have had a book out at all if it hadn’t been for our little publishing venture.

Kit Rocha: In 2001, Bree found herself in dire financial straits. So she packed up everything she could and moved across the country—and moved in with Donna.

In 2001, explaining that you were about to move across the country to live with someone you met on the internet got you a lot of weird looks. There was this constant expectation that we couldn’t possibly “know” each other because the internet Wasn’t Real Life. As if existing in the same physical space as someone means you have achieved some sort of community that you can’t while just talking to them for hours a day, every day, about everything, for years.

Since we’ve spent the past decade writing over forty novels and building a pretty rocking career together, I’d say we’re doing just fine.

In April of 2020, the world tried to figure out how to operate on the internet. Those of us who have been doing it forever reached out to those who had avoided it, and together we’ve floundered into the next stage of our interconnected world, where Internet Life and Real Life are both just … life.

If we can take anything with us into whatever our new normal becomes, it would be nice to recognize that the bonds of connection we forge with our people over the internet can be as deep and meaningful as those we forge with the people in close physical proximity to us. That it’s not weird or desperate to have a pocket full of friends or a group text of people spread out over the world who you may never see in person, but who are your literal daily lifeline.

Getting a life doesn’t have to mean logging off and going outside. It just means find your people who give you joy. And if you need advice on how to do it, ask someone raised by fandom.

We’ve been doing it for decades.

Camilla Bruce is a Norwegian writer of speculative and historical fiction. She has co-run Belladonna Publishing, a small press that published dark fairy tales. Camilla currently lives in Trondheim with her son and cat. Her first novel, You Let Me In, is out from Tor now, and her website is located at camillabruce.com