A Celebration of Chaotic Good 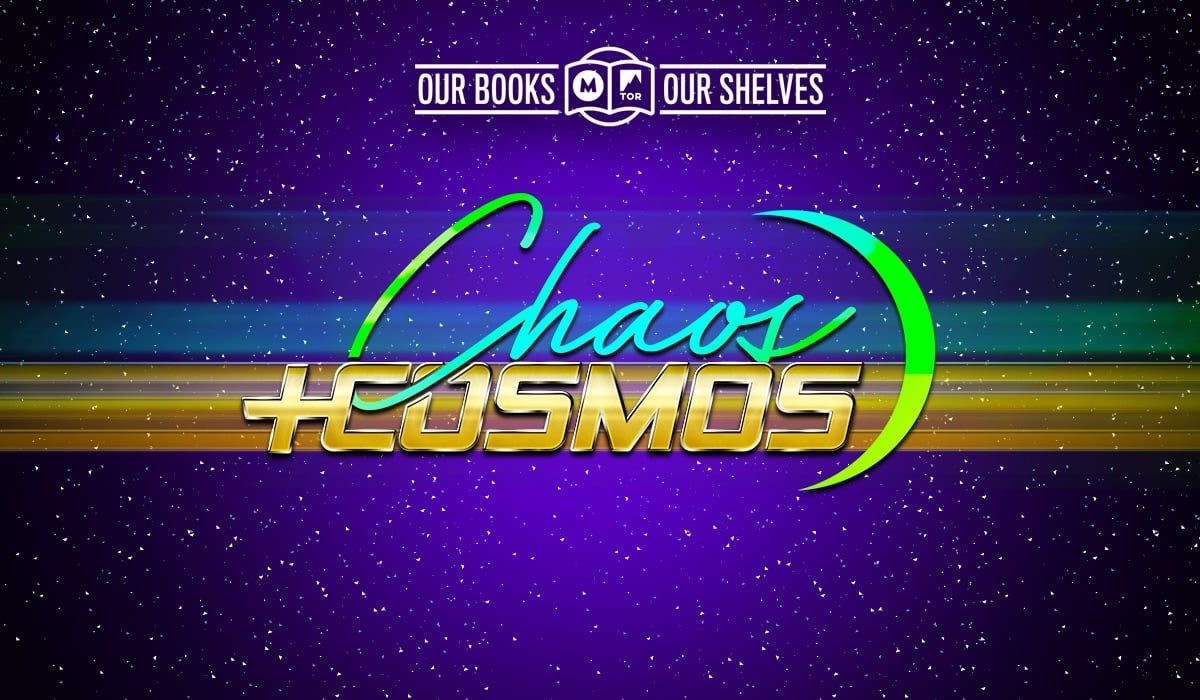 They’re wild, they’re untamable, they might be outlaws, but they’ll protect the innocent, look out for the little guy and take on the biggest baddies. That’s right, we’re talking everyone’s favorite character alignment: The Chaotic Good.

Who better to talk about these well-intentioned rebels than four authors from Tor Book’s yearlong Chaos and Cosmos campaign?

Join Andrea Hairston, author of lush epic fantasy Master of Poisons; S. L. Huang, author of fairy tale retelling Burning Roses; S. A. Hunt, author of horror-tinged adventure novels Burn the Dark and I Come with Knives; and Ryan Van Loan, author of Sherlock-inspired fantasy The Sin in the Steel in a discussion of all things chaotic good.

What are your essential ingredients of a great chaotic good character?

Ryan Van Loan: A chaotic good character is at least free-spirited, if not an outright rebel. They have distrust or dislike for authority, especially if a law or rule is getting in the way of “the good.” They are willing to act on their belief of what is good, no matter the cost. I think those are the essentials? After that it really breaks down into different flavors, but I think those flavors are all anchored in the ingredients above.

S. A. Hunt (Samara): My favorite chaotic good characters are the ones that “contain multitudes,” like the quote says, and have this whirlwind inside them, this conflict that pulls them in different directions. While you can have a lot of fun with a Lawful good character that tromps around gormlessly fighting injustices, or a Neutral evil character that can switch sides at the drop of a hat to pursue their own goals, I find that the most realistic characters are the ones that make decisions on a regular basis between serving their own needs and serving the needs of the people around them. None of us are all selfless, none of us are all self-serving. So that dichotomy is, to me, the most important quality in a Chaotic good character because it gives the writing authenticity.

Andrea Hairston: A good chaotic character can’t fit in anybody’s box and can’t follow anyone’s recipe. It’s hard to find essential ingredients for good chaotic characters, since what they do is break recipes. They do not grant anyone absolute authority—and that would include not granting that to themselves. They often take great risks and make terrible mistakes. They are open to the wisdom and possibilities that others offer because of their experiences and positions, but a good chaotic character is also ready to challenge authority and to change themselves when they find a better way, a new insight, a road that leads somewhere no one has gone before. They make a road we can all take.

S. L. Huang: I don’t think a sense of humor is a requirement, but I also don’t think I’ve ever written a chaotic good character who didn’t have one!

Who are some of your favorite chaotic good characters in genre?

Ryan: Lyra Silvertongue, Harry Dresden, Lessa from Dragonriders of Pern, X-23. If you’re noticing a theme here it’s that I’m a sucker for those who draw lines and say no farther in the face of overwhelming odds. Just because something can’t be overcome, doesn’t mean it shouldn’t be faced, come what may. Also, they all tend to be too smart for their own good, too quick with a retort that would have been wiser left unsaid.

Samara: I think for me, my very favorite is Max Rockatansky, otherwise known as Mad Max. There’s also Raphael the ninja turtle, who for me embodies “chaotic good” because he does his best to help the people around him even as he struggles with his anger and his urges to do the loner thing and go his own way. “Chaotic good” is an alignment from the Dungeons & Dragons alignment table, and I agree with something I’ve read that says the “evil” half of the alignment table corresponds not necessarily to “mustache-twirling villainy,” but a simple selfishness. As in, if your character is “Lawful evil,” then they’re “Lawful selfish,” which means they’re not necessarily a villain but simply someone who uses rules and laws as a structure to help them get what they want. So I think that giving into your baser urges, like sublimating your anger and/or killing an opponent, is a selfish act in itself and Raphael struggles to avoid giving into that selfish urge.

Ryan: Raphael is great! That was my favorite ninja turtle growing up (and the show is very much responsible for me having surfer language like ‘dude!!’ and the like despite being an East Coaster). Where do you think Michaelangelo falls on the alignment spectrum?

Andrea: I love Mad Max. I also love Furiosa in Fury Road. Indeed so many characters in Fury Road are marvelous—NUX as War Boy turned lover is a delight. Essun in the Broken Earth trilogy is a great chaotic character, as is Nassun, her daughter. These characters have been cut off from their history; their powers they can’t control and live in a society that is fueled by their torture and sacrifice. With insufficient knowledge, they must make terrible decisions and live with and alter the literally earth-shattering consequences of their actions.

SL: I was never into the Ninja Turtles, but Michaelangelo is definitely lawful good—I mean look at his David! Renaissance classicist right there! For chaotic good I’d have to go with Bernini or Gentileschi and the baroque. Or Monet. The Impressionists were freakin’ radicals.

Okay, for serious—Rebecca Roanhorse’s Maggie Hoskie is one of my favorites from recent reading. EXTREMELY chaotic. And also good. For a delightful (and less murder-y) kidlit example, both main characters in Sal and Gabi Break the Universe by Carlos Hernandez are the epitome of chaotically precocious young people, and are simultaneously so wholesomely good it hurts.

What’s your best advice for being a chaotic good in the real world?

Ryan: John Lewis has been on my mind a lot lately, for obvious reasons. I think he said it best: “Get in good trouble.”

Samara: “Do good recklessly.” That’s a quote from my favorite podcast, The Adventure Zone. I mean, I think it’s been around longer than the podcast, but that’s where I heard it. For me that means to leave the world better than you found it, even if you have to break shit to do it.

SL: I think, and this might sound unexpected, but I think one of the most overlooked pieces of being Chaotic Good is that it involves hardship and sacrifice.

I don’t think that’s how it’s usually thought of, is it? Chaotic Good is like, the happy-go-lucky rebels who do things the way THEY want to, all on the side of good. But—another way of thinking about it is that chaotic good is non-lawful good, right? I love, love the reference to John Lewis that you made, Ryan … and I keep looking back and remembering how John Lewis was beaten within an inch of his life. Among so much else—he was arrested, jailed, denied fundamental rights … many of the things we remember him for were illegal and dangerous and difficult with no assurances of the way any of it would turn out, and he chose to do them anyway.

And like … I think Lawful Good has a place, people working within the system, and it’s fine for people to choose that. But Chaotic Good is—it’s rocking the boat. It’s making people mad. It’s risky and frightening sometimes; it’s so often putting personal reputations or careers or safety on the line in some way. And it’s so wicked admirable to see people doing that in real life—people in both the U.S. and elsewhere who are protesting, toppling statues, putting massive pressure on their governments. Or even in smaller communities—in our professional industries or our hobby communities or our towns—people speaking up and standing up for each other, even when it comes with a cost. I think that’s what I’d say about Chaotic Good—that part of the reason it’s awesome and admirable is that it has a cost, and people do it knowing it will have a cost.

Ryan: Oh, I love that take, SL! I completely agree that it does come with a cost, if nothing else than being outside the system and all the associated costs, and you nailed it … these characters know there’s a cost. They do it anyway.

Andrea: I hadn’t gotten down to SL’s wonderful comments. Good trouble—that’s what I’m talking about when you take risks to challenge authority and make a road or a bridge to another way of being. Like John Lewis. And like the characters in The Broken Earth series.

Who’s the best alignment to pair with a chaotic good?

Ryan: The wonderful thing about chaotic good is you can make some great arguments for almost every alignment pairing, but my personal favorite is pairing them with lawful good because both characters want the same thing, but one is constrained while the other isn’t and that makes for an interesting dynamic. Lawful evil would be a close second.

Samara: I have to agree with Ryan here—Lawful and Chaotic make for a good duo because your Lawful character is the “straight man” that provides the foil for the Chaotic. Like a comedy duo, the straight man serves as a sort of vehicle for the comedian, grounding his jokes in common sense while simultaneously sharpening their comedic point. In this instance, the by-the-books Lawful character delivers a contrast that really drives home how the Chaotic character has strayed from social norms and “safe” methods, and provides a sounding board to inject a more rational “everyman” angle to the narrative to, again, ground the situation and give it depth.

SL: Thirded! Do you all think about alignments before or as you write, by the way? I don’t, but I do it for fun after, and I agree that I often find I’ve paired people for maximum wacky tension. There’s a reason the “by the book one”+“wild one” buddy story is such a classic!

Ryan: I don’t, but now I want to, haha. My characters come to me very organically, while my plotting tends to be much more structured. I do, however, play around with that TV Tropes site sometimes when I have some ideas to be reminded of what’s been done before or what pairs well together. I really should try this with characters!

Andrea: I like to pair characters who have different mindscapes, who experience the world/universe from vastly different perspectives. They don’t live in the same worlds often so it’s fun working out how they communicate and interact. Maybe somebody believes in the dominant world narrative and somebody doesn’t. But they have to come up with a new version of reality that they can all live in.

Ryan: Ohh, I love them all! Sometimes the mavericks will grate on me a little bit, but gentlefolk thieves, anti-heroes, golden-hearted tricksters, and the Magnetos or Harlequins of the world … yes please!

Have feelings about what it means to be a chaotic good? Tell us in the comments!

Explore more great Chaos and Cosmos content from these authors and more on Tor’s Blog here.