Our Books, Our Shelves: What Can Gender Swapping in Stories Tell Us About Ourselves? 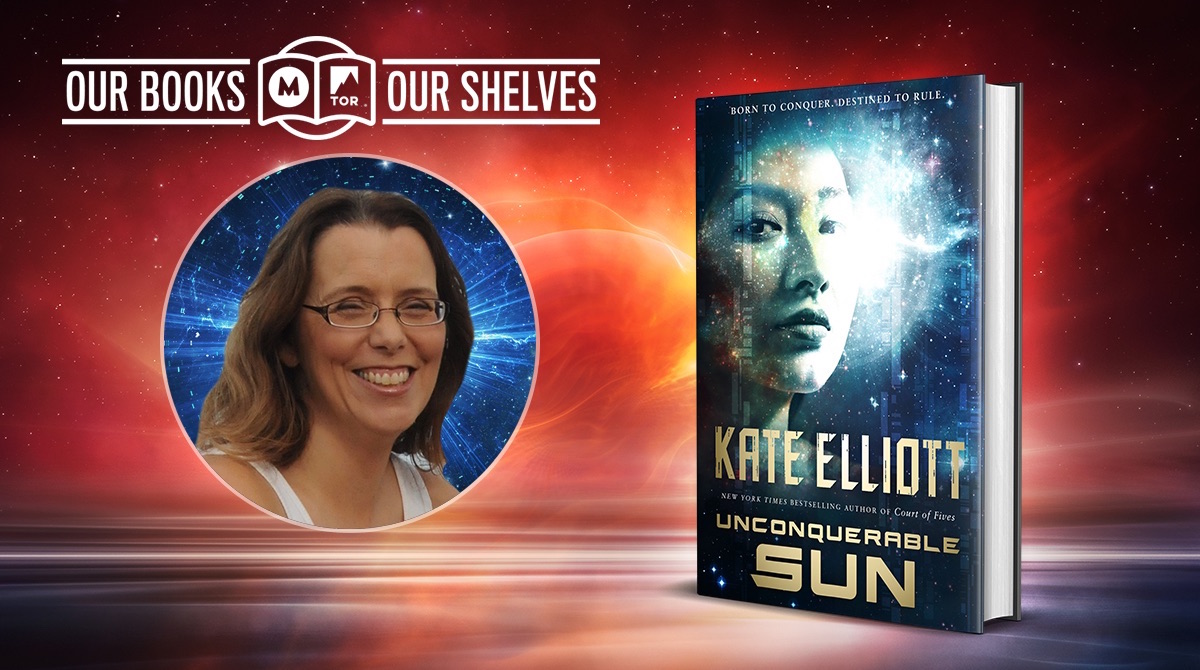 When I first got the idea to gender swap Alexander the Great and tell his-now-her story as a space opera in Unconquerable Sun, I had to ask myself: How did I get here? Why do I want to do this?

It starts in the past.

As a girl I loved to play outside, climb trees, row boats, swim in the river, hike, and explore. As a young reader I gravitated to adventurous stories. I wanted to be a bold warrior going on a quest or a skilled ranger scouting out new territory. But when I was reading with the voracious passion of an adolescent, those stories were about men and boys.

If girls or women appeared they were few and far between and usually the love interest, the bad girl who had to be punished, or a care-taking character like a mother or elderly woman who helped out the hero(es). In other words, women existed to prop up men’s stories. In those days they rarely got adventurous stories of their own. Received wisdom of the time generally stated that women weren’t physically capable of engaging in adventure and certainly would never want to anyway.

This restriction—this lie—frustrated and angered me. When I started writing as a teenager I wrote adventure stories with women and girls as main characters. They traveled to foreign kingdoms. They fled court intrigue and went on the road to find allies. My youthful stories weren’t well written or skillfully told but they were mine, and to a fair extent they reflected me in all my outdoor tree climbing glory. There were sword fights and love interests and roads to walk and secrets to uncover and victories to be won. Meanwhile I kept reading and absorbing the stories of derring-do and martial prowess that were available.

It’s no wonder I was dazzled early on by the story of Alexander the Great.

He lived over two thousand years ago. As king of Macedon he conquered Persia, the great empire of his day, and by doing so created the largest empire then known in history. In the ancient world, or at least among the Romans, he was declared the greatest military leader who had ever lived. Histories of his campaign and legends about his life proliferated for centuries as far afield as Persia, India, and Ethiopia. The Alexander Romance, more fiction than history, was one of the most popular stories in the European Middle Ages. New biographies of him are still published every few years. He is the icon of an ambitious and successful young conquerer.

There are a lot of questions to go along with any retelling of history, myth, or classic fiction as you start to think it through. What can I accomplish by telling the story this way? What is the core element I need to leave unchanged? Which aspects of the story will transform or shift shape because of the choices I’m making as I write it? In my case, why Alexander the Great at all?

Because it turns out there’s an unexpected danger in the gender swap.

Let King Arthur become Queen Artia who falls in love with Princess Guinevere. Shakespeare is now his own sister, scribbling at a desk. These sound great! I’d read them in a heartbeat. But what about the stories of the women who lived in those times (including those who wrote plays or fell in love with other women)? What if they had far more complex and interesting lives than commonplace history teaches? It is dangerous to think a woman can only be interesting in a story if her story fits a traditionally masculine role because then we are still saying that only men have interesting stories.

Over the years I have had to untangle my own identification with “boy stories” in order to understand two things: women’s lives are worthy of story in and of themselves, and adventure doesn’t belong to men; it belongs to whoever wants to read about it or live it.

This hard-won understanding helped me change my focus. It made me realize how important it is to look at the real, complicated, fascinating histories of women’s lives in the past and build fabulous stories out of those. To elevate women’s lives as they were lived by reminding readers (and ourselves as writers) that they are also universal narratives for everyone and anyone as a window into the human condition. For example, Aliette de Bodard’s science fiction novella On a Red Station, Drifting features a woman who manages a household as the focus of a story of regret, pride, and the far-reaching consequences of war tightly and tensely told within domestic circles.

But what about gender-swapping Alexander the Great? Because it turns out there are other good reasons to gender swap well-known stories and situations. Such stories can bend our view, turn us to see the landscape through a different window, place an altered lens before our eyes, upend history or literature in a delightful way.

I love Sherlock Holmes re-tellings in which Holmes or Watson or both are not men (Sherry Thomas’s Lady Sherlock series, Claire O’Dell’s A Study in Honor, Aliette de Bodard’s The Tea Master and the Detective, Katharine Addison’s Angel of the Crows, and Japanese TV show Miss Sherlock, to name a few). For example, in the Holmes case (see what I did there) it offers a view we haven’t often gotten in the past of a woman’s incisive intellectual brilliance taken for granted and her eccentric ways accepted for the sake of that brilliance.

Looked at this way a gender swap isn’t about giving a woman character status and importance by making her a man or by giving her a traditionally male role. It’s about letting the narrative present not-male characters with the same qualities men have long been valorized for and which women and other marginalized and under-represented genders have always possessed but too rarely been allowed to express. It’s about building a narrative that allows these qualities to be normal for anyone in a created world where gender isn’t the defining social and intellectual and physical quality of an individual.

One of the important aspects of the Alexander story is that no one in his day would have challenged his ability to rule because of his gender. This meant the space opera setting I built had to echo this core element of his history, on which I loosely base my plot. The ripples from that point of change spread more widely than I expected and flowed in directions I did not foresee.

What can gender-swapping historical and literary figures tell us about ourselves today? Here’s one: Women too rarely get a turn in fiction, much less real life, as truly charismatic, capable leaders and military minds whose capacity to lead is never doubted. I wanted to write that story.

Kate Elliott’s epic gender-spun tale of Alexander the Great in space, Unconquerable Sun, is available now from Tor Books. Elliott has been writing science fiction and fantasy for 30 years, after bursting onto the scene with Jaran. She is best known for her Crown of Stars epic fantasy series and the New York Times bestselling YA fantasy Court of Fives. Elliott’s particular focus is immersive world-building & centering women in epic stories of adventure, amidst transformative cultural change. She lives in Hawaii, where she paddles outrigger canoes & spoils her schnauzer.