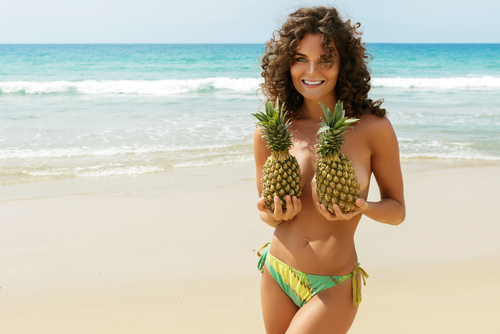 Ocean City, MD passed an emergency ordinance yesterday. Did this “emergency” have to do with ensuring that the basic needs or physical safety of its constituents are met? No. It had to do with protecting the citizens of Ocean City…from seeing breasts.

It all started last summer when, according to Jezebel, “‘Topfreedom’ advocate Chelsea Covington filed a brief with the Maryland Attorney General’s Office demanding she be allowed freedom from her top.” In her brief, she cited the state constitution’s “absolute prohibition” of discrimination based on gender.

After her brief was filed, the city told beach employees not to approach any women they saw topless until the Attorney General made a ruling. They were simply to register complaints. However, Ocean City really wanted its citizens to know that they would never actually have a “topless beach,” because God forbid:

So yesterday, the City Council had an emergency meeting (I really…I can’t get over it…this was an emergency? Like a “let’s come in on a Saturday” emergency?) and unanimously passed an ordinance “prohibiting public nudity, or those in a state of nudity.” So, this means men will have to keep their shirts on at the beach too, right? After all, a dude with his shirt off is in a state of nudity.

AHAHAHAHAHAHAHAHAAHA! No, of course not. That’s never what it means. Here’s a part of the official statement from Ocean City Mayor, Rick Meehan:

Further, the ordinance reads, “equal protection clause does not demand that things that are different in fact be treated the same in law, nor that a government pretend there are no physiological differences between men and women.”

The council voted unanimously in favor of the emergency ordinance.”

The mayor also says, “While we respect Ms. Covington’s desire to express what rights she believes she may have, Ocean City is a family resort and we intend to do whatever is within our ability to also protect the rights of those families that visit us each year.”

A couple of things:

I’ll leave you with this awesome spoken word poem by Hollie McNish that touches on the hypocrisy of women being told to cover their breasts in public from a different perspective:

Women who want to be topless on beaches or in parks want to be topless for the same reasons men do. Because it’s so hot that even a layer of clothing is too much.  Or they want to feel the breeze on their skin. Or they don’t want bikini top-shaped tan lines any more than a dude wants a “farmer’s tan.”

And listen, I understand individual women choosing to not go topless. Because yes, we are sexualized. We are often the victims of sexual harassment and assault. For many of us, it doesn’t feel safe. But that’s up to each woman to decide for herself. Perhaps, rather than policing what women do or don’t do with their breasts, Ocean City (and everywhere else with similar laws in place) should consider focusing on womens’ safety, rather than focusing on the “offense” caused by their bodies.

The world doesn’t need to be “protected” from the sight of women’s breasts. It needs to be protected from sexual violence and gender discrimination. Let’s keep our priorities in order, shall we?