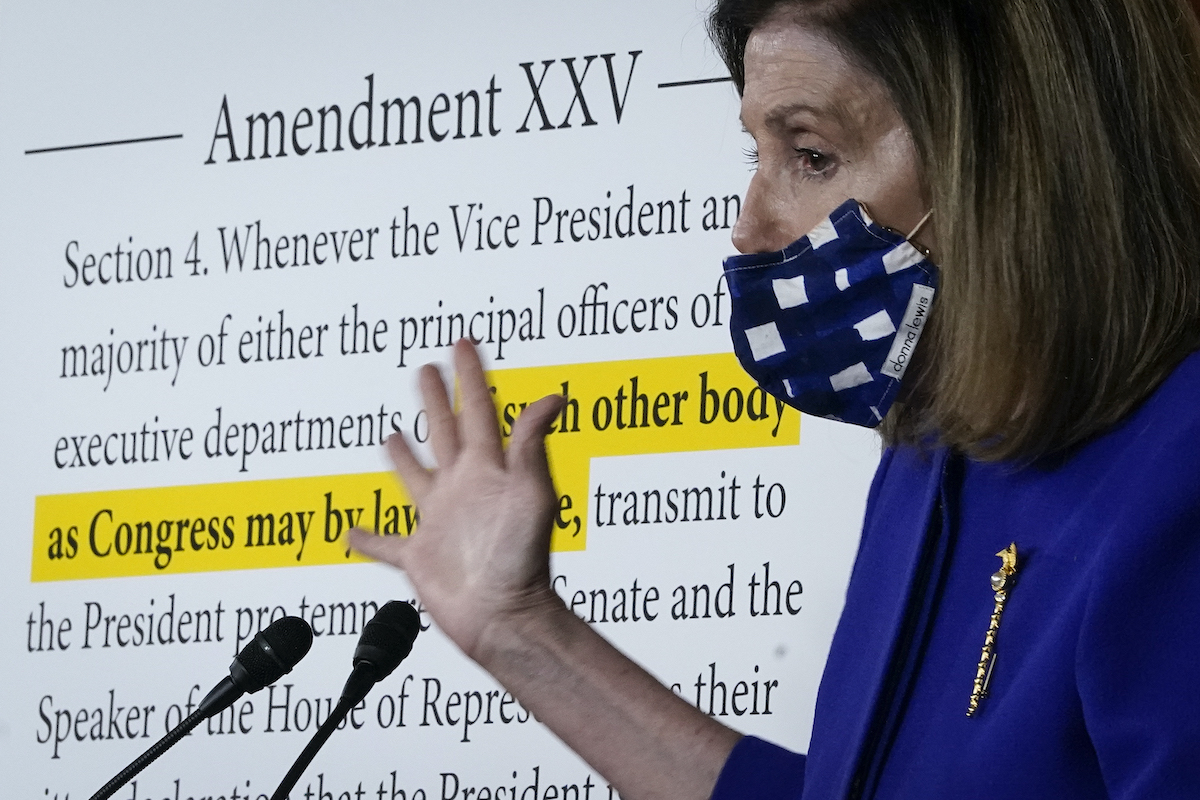 At her press conference Thursday, Nancy Pelosi was asked what she thought the prospects were of continuing talks with Steve Mnuchin and Donald Trump in regard to a much-needed COVID-19 stimulus package. Pelosi’s response was to say that it’s hard to know how to have serious talks with someone who’s out here tweeting about how young and healthy he is and how he’s a “perfect physical specimen”—which Trump did—”instead of addressing the facts” about America’s coronavirus death count.

“Tomorrow, by the way, tomorrow, come here tomorrow,” Pelosi said. “We’re going to be talking about the 25th Amendment.”

.@SpeakerPelosi: “Tomorrow, by the way, tomorrow, come here tomorrow. We’re going to be talking about the 25th Amendment.”

And she did just that. Friday morning she unveiled legislation to establish a bipartisan “commission on presidential capacity,” which would effectively give Congress the power to weigh in on a president’s fitness and consideration of invoking the 25th Amendment.

The 25th Amendment was ratified after JFK was assassinated, and it provides procedures for the transfer of power in case the president is vacant, incapacitated, or otherwise unable to fulfill his duties. But Rep. Jamie Raskin, a constitutional scholar, joined Pelosi to explain that there’s never been an actual body set up to invoke the powers granted to Congress by the Constitution. So that’s what they’re looking to do now.

Pelosi insists that this isn’t necessarily because of Trump—”He will face the judgment of the voters,” she says—but that Trump, with his current “disassociation from reality,” has proven the need to establish this process for future presidents.

Which I guess is how Trump arrived at this bizarre conclusion:

Crazy Nancy Pelosi is looking at the 25th Amendment in order to replace Joe Biden with Kamala Harris. The Dems want that to happen fast because Sleepy Joe is out of it!!!

There’s no way Pelosi can actually be expecting to relieve Trump of his presidential powers via the 25th Amendment but that’s no reason not to set up this commission. As she says, it’s the duty of Congress to “protect the stability of our government for the future.”

Also, if this legislation succeeds, Trump’s current erratic behavior will forever be tied to constitutional history. With any luck, generations from now, kids will be reading Trump’s tweets in textbooks and learning how they led to a new congressional body designed to remove that kind of person from office. Just as his presidency will always have the asterisk of impeachment on it, this should be a part of his shameful legacy.