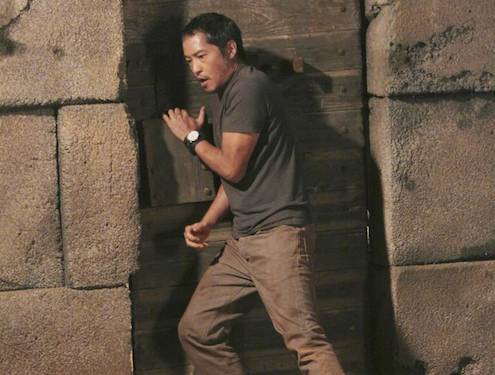 What follows is a recap of LOST Season 6, Episode 6: “Sundown.” Lots of spoilers ensue.

Tuesday’s episode of LOST was a non-stop rollercoaster ride full of ups (on the island) and downs (off the island). With only 10 episodes left before the series finale, last night’s episode wasted no time diving right into the elusive island war that fans have been anticipating since the end of Season 5. Let’s leap right into dissecting this complex episode:

To my surprise, “Sundown,” centered on Sayid, not Sun/Jin, as the episode title was rumored to have suggested. As we’ve seen throughout this season, life in the new post-Oceanic 815 landing is a bit better for most of our Losties. Kate may still be a murderer (we can’t say for sure!) but she showed her sensitive side by creating a relationship with a very pregnant Claire. John Locke is about to marry Helen, finds a job as a substitute teacher, and is beginning to accept his life in a wheelchair. Jack repairs his relationship with his son, David.

Unfortunately, Sayid’s new off-island life isn’t cheery by a long stretch. We learn that his brother, Omar, is married to Sayid’s long-time love, Nadia. They have two children and live in suburban Los Angeles. Sayid has a job working for an oil company (but still was an Iraqi interrogator in the war), which causes him to travel around the globe. Nadia writes him, and while he doesn’t write back, he does carry a picture of her in his suitcase. The tension between Sayid and Nadia was almost painful to watch and fans across the country were surely screaming for a twist of fate.

Sayid learns that Omar has made some poor business choices and owes money to someone who is now threatening his life. Omar is stabbed in the chest (enter Dr. Jack Shephard at the hospital!) and Nadia begs Sayid not to retaliate again the men who stabbed her husband. Unfortunately for Sayid, the men who shot Omar come to him. After a ride in a black SUV, Sayid arrives at some strange industrial kitchen and we see that Martin Keamy (the leader of the mercenary team that came to the island on Charles Widmore’s freighter and was murdered by Ben in Season 4) is the man responsible for Omar’s stabbing. After exchanging a few words, mainly about eggs, we see that Sayid is still capable of murder. Triple murder to be exact. At the end of the off-island portion of last night’s episode, we learn that Keamy has Jin locked in a refrigerator. We don’t know why, but I think we can safely assume it has something to do with the large amount of money Jin brought from Korea.

So here’s the question. Are the creators of LOST trying to tell us something about Sayid’s true character? His off-island life is still full of torture (even on a personal level as he pines after his brother’s wife) and death. Is he, as Dogen suggested, unbalanced inside with bad outweighing good? Sayid even wore his signature black tank top in his flash sideways. Don’t underestimate this wardrobe choice, even clothes matter on LOST.

On the island, the action didn’t disappoint. Sayid and Dogen have one of the best fight scenes in LOST history, which ended only when Dogen’s baseball almost hit the ground. We learn later that his son played baseball, and he moved to the island to save his son’s life, courtesy of Jacob. Personally, I’m glad we got to the bottom of the baseball mystery; I didn’t have time to wonder about the meaning of a baseball when so many other things are going on!

Claire shows up at the Temple to let Dogen know there is someone waiting for him outside. Instead of doing his own dirty work, Dogen sends Sayid out to kill Flocke, telling him to stab him in the chest with a special dagger before Flocke says a word. Unfortunately, Flocke says hello before Sayid has the opportunity to put the knife deep in his chest. Flocke doesn’t even bleed (I mean, he is made of smoke, so no blood shouldn’t be surprising). Flocke then dangles the idea of Sayid reuniting with Nadia (who died in Season 5, Episode 16/ 17, The Incident, when she was hit by a car while Sayid talked to Jacob). The idea of seeing Nadia is enough to sway Sayid to Flocke’s side of this island battle. So even though Sayid may be tipped towards the dark side, he is still motivated by love.

Sayid returns to the Temple, yells a warning to the Others that they have till sundown to leave the Temple or die, and then he kills Dogen and Lennon (anyone else glad to see Lennon gone?). Dogen’s death somehow allows Flocke to enter the Temple in the form of the Smoke Monster. He kills many of the Others, but leaves Kate, Claire, and Sayid untouched.

Ben, Illana, Sun, and Lupidus also make it to the Temple and hide in a secret passage with Miles before Smokey comes to kill them. Illana seems to know her way around the Temple pretty well, just like she knows her way around the island. This series can’t end without filling us in on her backstory.

At the end of this episode, we’re not sure where Jack, Hurley, Jin, or Sawyer are, but hopefully they’re all safely hiding out, drinking some DHARMA beer. I don’t think our Losties will be having much more time to kick back and enjoy DHARAM goods and the beauty of the island after tonight, so they should take some time to enjoy the little things.

“Sundown” was awash with one particular LOST theme: the idea of good versus evil. I couldn’t keep count, but the words ‘good’ and ‘evil’ were utilized more than a few times last night. I think it’s safe to say we’ll be hearing a lot more on this theme in Tuesdays to come.