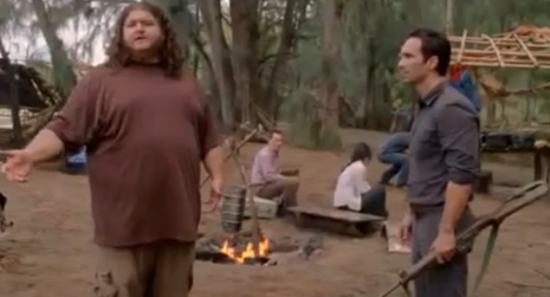 What follows is a recap of LOST Season 6, Episode 12: “Everybody Loves Hugo.” Lots of spoilers ensue.

Hugo “Hurley” Reyes has always been one of the most beloved characters on LOST for a few different reasons.  Sure, he brings the comic relief and is the kind of guy every fan wants as a best friend, but he also has a connection to the island that provides the background for some of the show’s greatest mysteries (the numbers and the ability to see the dead, just to name a few).  So it’s no surprise that last night’s Hurley-centered episode had funny moments, was extremely heartwarming, and offered glimpses into how LOST will wrap up.

Off the island, Hugo is receiving an honor (a dinosaur plaque) from Dr. Chang for his contributions to the paleontology wing of a museum in Los Angeles.  Hugo’s mother announces to Hurley that she’s set him up on a blind date since he’s so terrible with women (something she regularly bugged Hurley about in Season 1).  When he goes to meet his date, she does not show up, but Libby comes to sit with him.  She tells him that she knows him, but Hurley does not recognize her.  Dr. Brooks from the Santa Rosa Mental Health Institution comes to the table and takes Libby away, apologizing to Hurley.

The next day Hurley goes to Mr. Cluck’s and while he’s eating a family sized bucket of chicken, Desmond comes in and asks to speak with him.  Desmond listens to Hurley’s story about Libby and Desmond tells Hurley that he should go with his gut and try to find out how Libby knows him. Hurley goes to Santa Rosa Mental Health Institution and, after donating a sizable amount of money to the facility, he is allowed to see Libby.  She explains to Hurley that there was a plane crash and they ended up on an island where they liked each other.  She also noted that it seemed like they’ve both been in Santa Rosa before.  Hurley denies remembering any of this, but asks Libby on a date.

The date takes place on a beach, where they are having a picnic (much like the date they were supposed to have in Season 2, before Libby was shot).  They kiss, and Hurley sees flashes of their life on the island together.  Desmond is watching from his car.

So this begs the question, is Desmond uniting his fellow Oceanic passengers with their “constants”?  It surely seems that way.

On the island, Hurley spends time at Libby’s grave and Michael comes to talk to him.  Michael tells Hurley that he needs to stop everyone from blowing up the Ajira plane and getting killed.  He tries to stop Illana, who has gathered Black Rock dynamite, but before he can stop her, she blows up.  No more Illana.  Richard is determined to get more dynamite, but Hurley blows up all of the dynamite on the Black Rock before anyone can take any.  Richard, Ben, and Miles go off to destroy the Ajira plane, while Hurley leads Lupidus, Jack, and Sun through the jungle to talk to Flocke.

While on their way to Flocke’s camp, we learn the truth behind one of LOST’s longest running mysteries.  Hurley hears whispers, and calls out to Michael.  Michael explains that the whispers are dead people who are trapped on the island.  He also gives a rather heartfelt apology for killing Libby.
There’s a lot going on at Flocke’s camp too.  Sawyer and Kate are anxious to leave camp, find Jin, and get off the island. Flocke explains that in order for them to leave, all of the people they came with (Jack, Sun, Hurley) must come with them. Sayid comes back with Desmond, and Flocke takes Desmond to a well in the jungle.  He explains that the well is very old, dug with bare hands, and the site of some serious electromagnetic activity.  He tells Desmond that Charles Widmore is power-hungry (tell us something we didn’t know) and then he throws Desmond down the well.   When he returns to his camp, Flocke is met by Hurley, Lapidus, Jack, and Sun.  Flocke looks a bit upset with Jack and only says, “Hello Jack.”  Also, Kate had a pretty big smile on her face when Jack appeared in the jungle, so it looks like the love triangle lives on.

The strangest scene of the episode was, by far, the last scene.  Off the island, Desmond is sitting in his car, watching John Locke wheel away from his job at the high school.  Desmond speeds up his car and hits John Locke, straight on.  What the heck!?  Does Desmond want John Locke to reunite with Jack (could Jack and John possibly be each other’s “constants”)? Could Desmond want John Locke dead (does death off the island equate to death on the island)? So many questions, so little time!

Let’s hope the next six episodes are as exciting as Everyone Loves Hugo.  If so, LOST will surely go out with a bang!