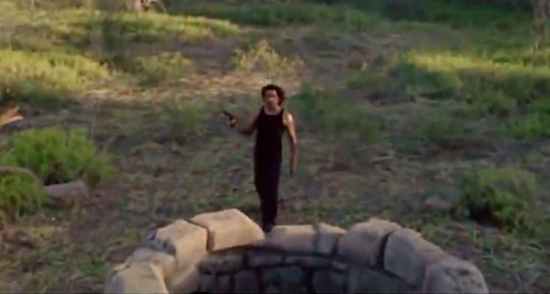 What follows is a recap of LOST Season 6, Episode 13: “The Last Recruit.” Lots of spoilers ensue.

With only four episodes left until the Season Finale on May 23rd, LOST gave viewers another fast-paced episode last night. “The Last Recruit” brought us up to speed on the lives of all of the LOSTies, both on and off island.  There’s so much to recap – so let’s not waste any time!

Off the island, action began with Locke’s ride to the hospital (St. Sebastian’s of course, where Dr. Jack Shephard works) post-Desmond hit-and-run last week with Ben by his side.  When they arrive at the hospital, Sun, who was shot a few weeks ago (Episode 10, The Package) sees John Locke from her gurney and freaks out, yelling “No, No, it’s him.”  What that means, we have no idea.  We learn later in the episode that Sun and her unborn baby are both fine, and that Dr. Shephard will be performing surgery on John Locke, who he does recognize from Oceanic 815.

Sawyer arrested Kate after their run-in in the alley (Episode 8, “Recon”).  She tells him (twice) that she’s not a murderer.  Sawyer tells her to tell that to the Feds when they get there, and he also makes an off-hand comment about how strange it is that they saw each other on Oceanic 815, saw each other in the airport elevator, and then ran into each other in an LA alley.  Miles pulls Sawyer away from Kate, telling him that there’s been a multiple homicide.  Miles shows Sawyer a picture of Sayid, saying, “That’s our bad guy.”   Miles and Sawyer arrest Sayid as he’s trying to escape from Nadia’s house later in the episode.

We also caught up with Claire, who was about to go to an adoption agency (on the 15th floor) when she meets Desmond in a busy lobby.  Desmond tells her that she needs a good lawyer, explaining that adoptions are expensive, and says he’ll take her to someone right now and that he’ll pay for Claire to see an attorney.  Well the attorney turns out to be Illana, who has been looking for Claire regarding Christian Shephard’s will.  Jack, along with his son David (whose mom is still a mystery) also show up at Illana’s office for the reading of Christian’s will.  Jack and Claire meet for the first time and Jack admits that he has no idea that he’s had a sister all these years.

On the island, the episode picked up exactly where we left off last week.  Hurley, Jack, Sun, and Lapidus meet up with Flocke’s camp.  Jack and Flocke do some “catching up,” and Flocke admits that he had occupied Christian’s body when Oceanic 815 first landed on the island.  He claims that he did it to help Jack, that he’s always tried to help Jack get off the island.  Jack and Claire have a reunion in the jungle, and Claire tells Jack that since he let Flocke speak to him, he’s definitely on Flocke’s side now.

Sawyer tells Hurley of his plan to escape via Widmore’s sub, which Kate fills Sun in on the plan.  Hurley asks about Claire and Sayid and Sawyer tells him that Claire and Sayid must be left behind because they’re on the dark side.  Kate also relays to Jack that Sayid has been acting strange.  Widmore’s number one lackey, Zoe (the Tina Fey look-alike) comes out of the jungle and demands to speak with Flocke.  She tells him that he stole something from Widmore (presumably Desmond) and that he has till nightfall to give it back, or else Widmore will explode his camp.

Flocke tells his camp to pack up, telling them it’s time to go to the Hydra island, find the plane, and get off the island.  He sends Sawyer and Kate after a boat (TheElizabeth, Libby’s boat that brought Desmond to the island) to take everyone to Hydra Island.  Sawyer concocts a plan to meet Jack, Hurley, Sun, and Lapidus on the beach with the boat, where they will sail to Hydra Island, find Widmore’s sub, and make someone drive them home.  Sawyer and Kate make it to the boat and bring it to the beach where they meet Jack, Hurley, Sun, and Lapidus.  Claire shows up with a gun pointed at the boat, and Kate convinces Sawyer to let Claire come along.  Claire, in her own creepy way, tells them all that if Flocke finds out they left, he’s gonna be mad.  Half way to Hydra Island Jack and Sawyer have an argument and Jack tells Sawyer that they have a purpose and maybe they’re not supposed to leave.  Sawyer tells him to get off his boat, and Jack jumps.  He swims to the beach, where Flocke’s team is waiting.

Sawyer’s boat makes it to Hydra Island, but is captured by Zoe on Widmore’s orders.  Widmore blows up the beach where Flocke’s camp plus Jack are standing.  Jack is blown away, and Flocke carries him into the jungle.  Flocke tells Jack that everything will be okay, since Jack’s with him now.

But the definite cliff-hanger of last night’s episode was the encounter between Sayid and Desmond.  Flocke sends Desmond away to kill Desmond, who is still sitting in the well he was thrown into last episode.  Flocke tells Sayid that in order to get to Nadia, he must kill Desmond.  Once at the well, Desmond asks Sayid what he will tell Nadia when she asks how he got back to her.  Sayid comes back to Flocke, reporting that he has shot Desmond.  Could Desmond really be dead?  His death would be the biggest death of the season, so far.

LOST is taking a break next week, so we’ll have to wait fourteen whole days to find out what happened to Desmond.  Until then, we can only wait and wonder what the next five episodes have in store for us!

Katelyn is a graduate student at Michigan State University is East Lansing, MI. In her free time she loves to spend time watching and writing about LOST.