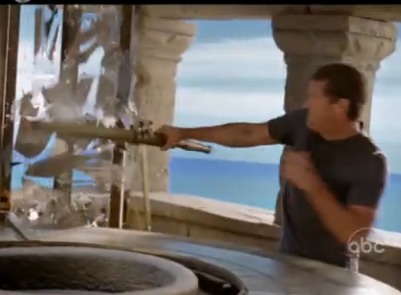 What follows is a recap of LOST Season 6, Episode 4: “The Substitute.” Lots of spoilers ensue.

Well, here we are, another week, another LOST episode – “Lighthouse” – that brings us another step closer to the series finale on May 23rd. While last night’s episode wasn’t nearly as explosive as The Substitute, it did give us a glimpse into some of the biggest remaining questions including Claire’s whereabouts for the last three years and another look at the infamous LOST numbers.

This episode centered on Jack Shephard’s off-island life. The last time we left off-island Jack, he was in the Oceanic terminal learning that his father’s body was missing. Well, Christian Shephard’s body is still missing and so is his last will and testament. When Christian’s will is found, Jack’s mother, Margot, reading from the will, asks Jack if he’s ever heard of a Claire Littleton. So we know now that in this new off-island reality, Claire Littleton is still connected to the Shephard family, we’re just not sure if she’s still Jack’s half-sister.

Not everything is the same for this off-island Jack though, as we learn he has a son named David. LOST has a history of ‘daddy issues,’ and it appears that David and Jack carry on this tradition. One of the most shocking moments of the episode came when Jack was listening to David’s piano audition and he runs into a well-dressed Dogen, who also has a musical son.

Other strange moments in Jack’s off-island life include the appendix scar that he doesn’t seem to remember. His mother claims he had it removed when he was young. We saw Juliet removed Jack’s appendix on the island in Season 4, Episode 10 (“Something Nice Back Home”). When offered a drink in this episode, Jack refuses the alcohol to his mother’s approval, even though he drank on the airplane. His mother’s response would lead us to believe that Jack may have a drinking problem in this new reality, which is true to form for the off island Jack in Seasons 4 and 5.

But the big off-island question last night’s episode left us with is: Who is Jack’s baby mama? It’s got to be someone we know, right?

A significant portion of the on-island action tonight was dedicated to two fan favorites, Claire and Hurley.

We’ve been waiting so long to learn what’s happened to Claire over the last three years and tonight did bring some answers. She’s been in the jungle, moving around to escape the Others, who she believes have Aaron and want to kill her. They captured her at one point and brought her to the Temple where they branded her (sound familiar to what we saw Dogen do to Sayid?). Claire does tell us that she’s not alone in the jungle, that her friend, who we learn is none other than Flocke, and her father are with her. When Jin tells Claire that Kate has been raising Aaron, Claire reacts strongly to this news, saying she’d kill Kate. Whoa, is that any way to repay the lady that took care of your kid?

Hurley did some more of Jacob’s dirty work tonight, and dragged Jack along with him on Jacob’s order. Jacob needed Hurley and Jack’s help guiding someone to the island. Who, you may be asking? In true LOST fashion, we have no idea. The dynamic duo snuck out of the Temple and headed through the jungle to find the Lighthouse, which, like Jack, I was shocked we’d never seen before.

The lighthouse contained the strangest and most intriguing part of last night’s episode. Jacob had told Hurley to set to the lighthouse to 108 degrees. While turning the wheel, we noticed that the numbered degrees corresponded to the names on the cave wall from last week’s episode. Jack, being Jack, freaked out when the mirrors were set on 23 degrees and he saw his childhood home. He smashed all four mirrors, which we found out was Jacob’s plan all along. Jacob works in mysterious ways, even when he’s dead. While the wheel was turning we also saw a glimpse of the church where Jacob visited child Sawyer and the temple where Jacob visited Sun and Jin in Season 5, Episode 16 and 17 (The Incident).

The episode left fans questioning two things. One, what is the secret mission Jack’s on the island for, as alluded to by Jacob? And what danger is on its way to the Temple, is it Claire or something worse?

Will we find answers next week? Who knows, but I’ll be watching to find out!