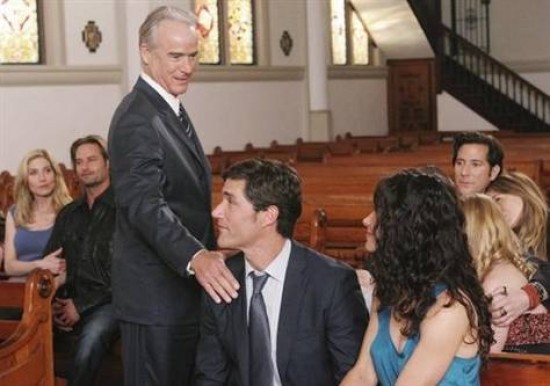 What follows is a recap and summary of the LOST series finale. Lots of spoilers ensue.

And then it was over.  The wait was over, the show was over, and the speculation on how it would all end was over.  But the endless questions, debate, and critique – in true LOST fashion, that’s definitely not over.

Loyal viewers were continually promised by the creators, by the writers, and by the cast that the ending wouldn’t be a cop-out, and it wasn’t. Sure, everyone did die (I think?  The ending scene in the church will definitely be dissected for years to come), but heck, you tell me how you would tie everything up!  But before you roll your eyes and say “I told you so”, let me say one thing.

LOST ended by completing a circle that began nearly six years ago, literally and figuratively.  The show began with Jack opening his eye, to see that he was lying in a bamboo field near a yellow lab we would come to know as Vincent.  The show ended with Jack closing his eyes, lying in that same bamboo field, next to Vincent.  But more than anything, LOST has always been a show about relationships between people who are lost and trying to find their purpose.  And LOST ended, both on island and off island, with people, purpose, and relationships at the core.

Okay, that was heavy. I could almost hear the sad LOST music behind me as I typed that.  So on a lighter note (and since I’m finding it impossible to recap two and a half hours of LOST in a readable format) let’s recap the eight most important moments in the LOST series finale.

1. The island was saved.  Jack kills Flocke and plugs the hole, restoring light to the island. Flocke’s goal was to sink the island, killing everyone on the island.  He utilizes Desmond, who is strangely immune to electromagnetic activity, and sends him down the tunnel of light.  Desmond unplugs the cork, and the island begins to shake and sink.  Jack and Flocke fight to the death, Flocke stabbing Jack in the neck (this is why he’s bleeding in the flash-sideways!).  Jack has the last laugh though when he throws Flocke off a cliff and he dies. Anyone else grasp the irony of Flocke falling to his death at the hands of the island protector, when the original Locke was brought back to life by the island protector after falling to his death?.  Jack, who is mortally wounded, goes back to the tunnel and plugs up the hole, submitting himself to massive amounts of electromagnetic activity.

2. Jack dies, leaving Hurley as number one and Ben as number two. The electromagnetic activity kills Jack, but before he dies he anoints Hurley as the new protector of the island.  The ceremony to induct Hurley as the island protector was cut a bit short, probably because Jack was bleeding from the gut and the neck.  As a huge Hurley fan, as most LOST viewers are, can’t help but feel that the creators gave Hurley this special position as a thank you to loyal viewers.  Ben, who seems a bit forlorn at the idea that he has once again been passed up by the island, becomes Hurley’s number two.  When they meet again off-island, Hurley tells Ben what a great number two he was.  Ben reciprocates, telling Hurley he was a great number one.  I have no doubt they both fulfilled their positions with great humor.

3. Lapidus, Miles, Richard, Kate, Claire, and Sawyer escape the island via the crashed Ajira plane. Richard Alpert, who was smoked by Smokey in the last episode, appears to now be aging (perhaps because Jacob is gone?)  He and Miles pick up Lapidus in the water on their way to the Hydra Island.  Lapidus fixes the plane with the help of Miles and some duct tape and just as they are about to leave the island, they see Sawyer, Kate, and Claire running towards the plane.  Jack and Kate confess their love to one another and after a long kiss he sends her away with Sawyer.  Kate meets Claire on the beach and convinces her to hop a plane back to Aaron.  Lapidus stops the plane long enough to pick up Sawyer, Kate, and Claire.  The last thing poor Jack sees before he dies is the Ajira plane flying away from the island.

4. Desmond pulls the plug on the island, causing it to begin sinking.  Jack saves him and we can only assume he’s living a happy life on the island. As noted before, Desmond unplugs the lighted tunnel, which causes the island to begin sinking.  He didn’t do it because he wanted the island to sink; he did it because he thought it would send him floating through time back to the arms of his wife Penny.  Unfortunately, that didn’t happen this time.  But Jack, savior of the island and the day, makes his way down the tunnel and sends Desmond back up via a very long rope. Desmond is greeted at the top by Ben and Hurley, but what happens to him after that is anyone’s guess.  Not a very climatic ending for such a constant character (ha, ha, get what I did there?).

5. True love conquers all, helping each off-island LOSTie remember their lives on the island. As Desmond began putting the pieces together off-island a few episodes ago, we realized that connecting people with their former on-island loves can help them remember the time they spent together on the island.  The series finale brought the rest of the LOSTies together.  Sun and Jin remembered their island lives while Juliet (who is David Shephard’s mom) gives Sun an ultrasound, just like she did on the island.  Sawyer and Juliet touched over an Apollo bar and remembered their love.  Sayid comes to Shannon’s aid during a bar fight, and BAM, their love is rekindled. (What’s Nadia, chopped liver? –Ed.) John Locke wiggles his toe and sees himself on the island.  Kate delivers Claire’s baby which helps her see her life on the island.  Charlie brings towels to the delivery and Claire sees her past island life with him.  It takes Jack a bit longer to make a connection, but when he puts his hand on his father’s casket, he too remembers his island life.

6. Jack fixes John Locke, restoring his ability to walk. On-island Jack kills Flocke, off-island Jack fixes Locke’s legs, helping him walk again.  This caps the relationship between the Man of Science and the Man of Faith that has been so essential to the story of LOST.  By giving Locke the ability to walk again, Jack sets him free and helps him remember his island life.

7. Ben atones for his sins, asking John Locke for forgiveness. At the end of the episode, everyone meets at the special LOST church. Ben sits outside and when John Locke arrives, they have a moment.  Ben apologizes for killing him, and Locke forgives him.  For a character ridden with ups and downs, good moments and evil moments, Ben ended on a strong note.  He was able to ask for forgiveness from Locke, and while he was just asking for forgiveness for one transgression, it felt like he was apologizing for everything that had happened throughout the course of the show.

8. Everyone is dead and will enjoy a happily-ever-after after life with their favorite fellow LOSTie (except Walt and Michael, who were blatantly absent from the happy church reunion). Everything that happened on the island happened, everything that happened off island happened.  There was no choosing between two different realities.  Now, the end is up for interpretation, but it seemed to me that they had all died at some point in their lives (everyone does die, after all) but what brought them all to the church in the end was the power of their relationships while they were on the island.  As Christian Shephard said, the most important time in their lives was the time they spent together.  And now their off to spend the rest of forever together.

So through all of the chatter that I’m sure will take place surrounding how the show ended, I will shut out all of the criticism and live happily ever after, thinking about all of my favorite television characters, spending forever together.  Because, as Christian said, the best television time I ever spent was with these characters.