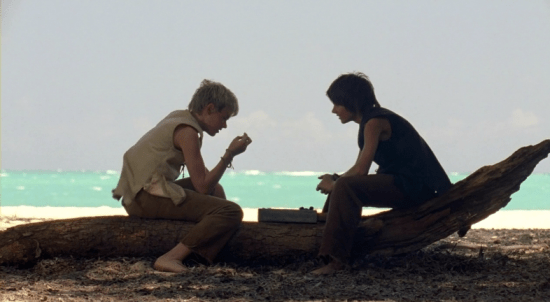 What follows is a recap of LOST Season 6, Episode 15: “Across the Sea.” Lots of spoilers ensue.

While there are many mysteries still to be answered on LOST, few mysteries have fans begging for answers as the history of the Man in Black. Last night’s episode, “Across the Sea”, departed from the Season 6 storyline of on-island/off-island action and brought answers viewers have been waiting for since the end of Season 5 when the Man in Black first appeared.

Jacob and the Man in Black were born on the island after their mother landed on the beach after a shipwreck. She was met by a woman who claimed to be living alone on the island. After helping the pregnant woman give birth to two babies, the woman killed her with a rock to the head. Jacob, wrapped in white, and the Man in Black, wrapped in black, were left to the care of the mysterious island woman.

The woman raises the boys, and tells the young Man in Black that he’ll never die, that there is nothing else but the island, and how they are the only people there. She also tells the Man in Black that he’ll never have to worry about death and that she’s made it so the twins can’t kill each other. Okay: Snother answer to why the Man in Black needed to find someone else to kill his brother. Needless to say, the mother is really strange, and definitely crazy. She also teaches Jacob to create tapestries, which explains where he picked up that handy trait.

The twins grew on the island, playing a game involving white and black stones with rules invented by the Man in Black. When Jacob complained about the rules, the Man in Black coolly replied that someday Jacob could make up the rules (oh, the irony!). Teenage Jacob is, in fact, the mysterious island boy that appeared to Flocke, Sawyer, and Desmond on the island in previous episodes this season.

One day, the boys are out chasing a boar when they come across other people living on the island. They run to tell the woman who they think is their mother. She freaks out, saying something about how it isn’t time yet, blindfolds the boys, and takes them out into the jungle. They arrive at a stream where there is a bright tunnel of light. She tells them that the tunnel is the reason they are here, that every man wants more of the light and that one of them must protect it to make sure that no one ever finds it. She also says if the light goes out, it goes out everywhere. Strange: very, very strange.

The twins’ real mother appears to the Man in Black, and shows him where on the island there are people who were also shipwrecked. She explains that he actually doesn’t come from the island, but from across the sea. This moment seems to be the origin of the Man in Black’s yearning to leave the island and return home. He decides that he wants to live with them, and tries to take Jacob with him, but Jacob won’t leave the woman he calls his mother.

The next time we see the twin, they’re men. The Man in Black is living on the island with the people from the shipwreck, and Jacob stands in the jungle, watching them work. They meet in the jungle to play their game and the Man in Black tells Jacob that the people are bad and selfish, but smart. He tells Jacob that he’s been searching the island for the tunnel of light their mother took them to, but he’s never been able to find it. One day he began digging, with the help of the people, near places that make metal act strange. There, they found the light. This light was the key to leaving the island and the Man in Black was ready to leave.

Jacob returns to his mother and tells her that the Man in Black is leaving. She finds him, underground down a well. He explains that behind the wall is the light, and he’s creating a wheel that when turned channels the water and light. When he turns the wheel, he’ll be off the island. She hugs the Man in Black and says that she is sorry. Then she rams his head into the wall.

The woman takes Jacob to the light, telling him it is time for him to protect the life, the death, the rebirth, and the heart of the island. She also warns Jacob never to go into the light or he will suffer a fate worse than death. She takes out a wine bottle, the same one that Jacob showed Richard Alpert in Episode 9. She pours out some wine, chants in what seems like Latin, and gives the bottle to Jacob, who drinks. She then tells Jacob that she and he are the same.

The Man in Black wakes up in his village to find everything burned and everyone dead. He does find the game that he used to play with Jacob and one black and one white stone is left. He goes to the caves, where his mother and Jacob are living. He stabs his mother, killing her. Right then, Jacob arrives and is incredibly upset. He beats the crap out of the Man in Black and drags him to the light. Jacob throws the Man in Black into the light. Once his body disappears in the tunnel, a HUGE cloud of black smoke bursts from the tunnel and at once, all LOST fans screamed out loud! Smokey is born!

With only one episode left before the series finale, “Across the Sea” gave fans some of the answers they’ve been looking for since the first season. Let’s hope next week is just as explosive!