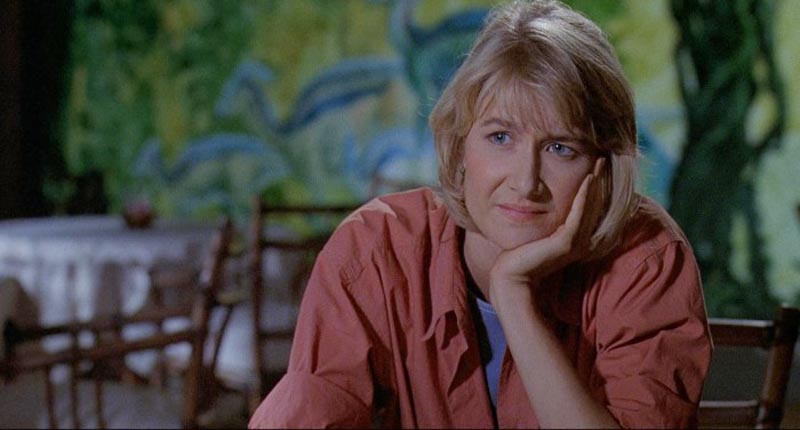 Funko has announced a new collection to celebrate the 25th anniversary of the original Jurassic Park film. As they posted on their blog, “This series of Pop! features paleontologist Dr. Grant, Jurassic Park CEO John Hammond, mathematician Dr. Malcolm, and embryo-smuggler Dennis Nedry! [And] We couldn’t forget the Jurassic Park dinosaurs! Featured in this line are the great T.rex, Velociraptor, and Dilophsaurus!”

Did you notice who they could forget, though? The female protagonist! I mean, we legit get TWO Nedrys before even one Dr. Ellie Sattler (played by Laura Dern). Okay, Funko.

Here’s a closer look at our Jurassic Park Pop!s coming this February! pic.twitter.com/Jm7zkdPYLk

However, a Dr. Sattler figure is on the way. At the very bottom of the blog post, the text “Dr. Ellie Sattler in Pop! Rides coming soon!” appears. Alicia Lutes from Nerdist rightly asked Funko where Dr. Sattler was on Twitter, and Funko said they “are making” one and will have more info “very soon.”

We are making a Laura Dern Pop! We’ll have more information on that very soon.

I’m pumped that Dr. Sattler will eventually be included in the collection, but releasing her in the second batch is pretty weird considering she’s one of the protagonists. Why are female characters, regardless of their prominence in the actual film, so often considered second-tier releases? The “Oh, and I guess here are the ladies” expansion pack is tiring. It suggests that even when women are literally the stars and heroes of a film, they still don’t really count as characters the audience can relate to or look up to. They’re still the window dressing.

I know that Funko often emphasizes the most memorable or meme-able characters, rather than necessarily those with the most screen-time or biggest role in the plot. But have they really not seen how many times someone uses Sattler’s “Woman inherits the Earth” line as a GIF? I mean, you can buy this line on a T-shirt for heaven’s sake.

We’ve seen this issue before with a number of properties. Gamora was missing from Guardians of the Galaxy merchandise. Black Widow was missing from Avengers merchandise. Rey, despite being the main character of not only The Force Awakens but the whole new trilogy, was left out of everything from Star Wars Monopoly to action-figure sets. Stores were legitimately running out of Rey merch, and a hashtag campaign #WheresRey was started to highlight the character’s utterly strange absence from marketing.

It seems that whether they’re actually secondary characters or not, women are still considered secondary.