#WheresRey? Not in Star Wars Monopoly, Despite Hasbro’s Promises 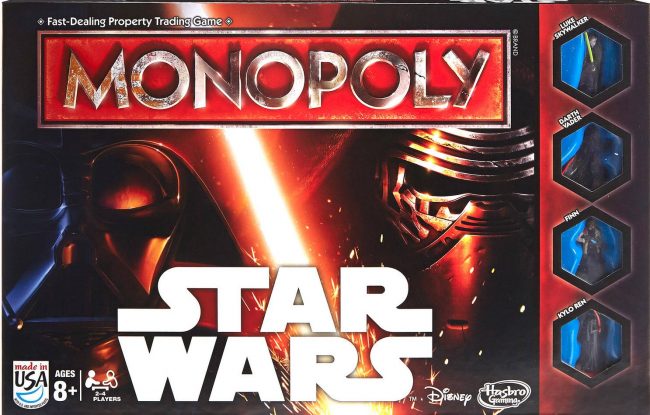 Last year, an eight year old girl wrote a letter to Hasbro wondering why there was no Rey token included in the new Star Wars Monopoly game. Hasbro responded to her letter, saying that they left her out because they didn’t want to be responsible for spoilers to The Force Awakens, as the board game came out before the film. Later, they promised to include Rey in subsequent versions of the game by the Fall of 2016. It’s now Summer of 2017, and we’re still waiting.

According to The Hollywood Reporter, Hasbro spokeswoman Julie Duffy said in an email statement back in 2016 that “We love the passion fans have for Rey, and are happy to announce that we will be making a running change to include her in the Monopoly: Star Wars game available later this year.” She also said that fans that had already purchased the game could contact Hasbro and request a Rey token.

So what happened? Apparently, “insufficient interest.” Earlier today, Duffy wrote, “In early 2016, Hasbro updated the 2015 Star Wars: Monopoly game to add a Rey token. This product was sold to retailers in several markets around the world, but is not available for sale in the U.S. due to insufficient interest.” She didn’t respond when the Associated Press asked her to clarify which markets have the Rey token available.

“Insufficient interest?” On the part of whom? The retailers? The consumers? And since when does Hasbro base their decisions on response to individual tokens within a game? I mean, I’d always hated the iron and the thimble in original Monopoly (everyone knows the Scottish terrier and the top hat are where it’s at), yet they were around for-fucking-ever. People didn’t buy the game because they really, really wanted to play a top hat. They bought the game because they like Monopoly.

When it comes to licensed versions of the game, there’s plenty sufficient interest in a little thing called Star Wars. I promise you, Hasbro, there’s interest enough in that brand that people will buy countless versions of Monopoly, no matter what the tokens, so long as it says Star Wars on it. So, the decision on what tokens to include is entirely yours.

In the image above, I see that this game includes Luke and Darth Vader … and Finn and Kylo Ren. If the goal was to incorporate the “old” and the “new” in the Star Wars universe, and to have balanced representation between the two in four tokens, it makes every kind of sense that Rey should be Luke’s parallel in the game, not Finn. Don’t get me wrong, I adore Finn, I love seeing a black character included in a Star Wars game, and want to see John Boyega’s face on every damn thing. But if we take a second to go back to the analogies we learned for standardized tests in high school:

To not have Rey be the first new character included in this edition of Monopoly, and for Hasbro to be swayed by perceived interest in the character and be willing to look so ignorant about the franchise they’ve licensed can only look like sexism. And no, being forced to have to contact Hasbro to request a Rey piece isn’t enough.

As Carrie Goldman (mother of the then eight, now ten-year-old girl who wrote the letter to Hasbro) said as she lamented the seeming reversal of the “running change” Hasbro promised, “I would still like to see it where any girl or boy or person who goes to buy the game, Rey is in there. I think that is what we had all understood how it was going to work.”

It’s about not hiding the star of the most recent Star Wars film because you’re embarrassed that she’s a girl, or you’re scared that people will respond negatively. You know what? She’s the star of the film. If they don’t like that concrete fact, they can stop watching the new Star Wars films. But just as you wouldn’t think to have a classic Star Wars anything without Luke Skywalker, you shouldn’t even think about having anything featuring characters from The Force Awakens without having Rey front and center.