Déjà vu all over again. 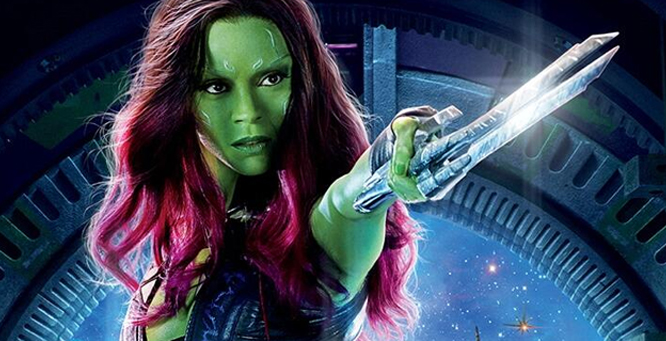 “Wait… women like sci-fi movies? And they want to be able to buy things with their favorite female characters on them? I thought they make less money than men… don’t they only have enough in their sparkly pink change purses for makeup and sandwich-making implements? I am shocked.” Disney, Disney, Disney. They’ve done it again, folks.

After seeing Guardians of the Galaxy, blogger (and friend of TMS) Amy Ratcliffe noticed something weird about the movie’s glut of merchandise: It doesn’t feature a lot of Gamora. Which is weird, seeing as she’s 1/5 of the title team and is pretty dang important to the film as a whole, yanno?

In a post on her site, Ratcliffe explains the tower of merchandise at Wal-Mart with Gamora on the display but not on any of the actual items you can buy. The shirt that features the other four members of the Guardians on it, but not Gamora, I guess because Disney thinks men have a mortal fear of turning into a woman if they wear something with a female character on it? And the Guardians minimates line, where the two packs with female characters (Gamora and Nebula) also happen to be the ones available only at specialty stores. A search of the official Disney Store yields only this Disney Infinity two-pack with Star-Lord.

There is a small amount Gamora merch to be found on Amazon, and she appears on some group shirts, but all too often it’s merch with some combination of Star-Lord, Drax, Groot, and Rocket, with no Gamora at all. Like this backpack. Marvel, I know you think of this as a “boy’s item”—though what’s inherently gender-specific about a fricking backpack I don’t even know—but even if you work off the premise that this is necessarily and exclusively a male item, there’s nothing to say you can’t put a girl on it. I don’t think young boys will freak out it all that much. You’ll be fine.

Ratcliffe suggested the hashtag #wheresgamora to bring awareness to this particular issue, and so far it’s taken off:

Hey @Marvel and @Disney, 44% of your opening week audience for Guardians were women… so where’s my Gamora merch??? #wheresgamora

As anyone who’s ever who’s ever screamed unto the heavens, “Why doesn’t this shirt come in a women’s cut?!,” the lack of awareness that geeky women actually spend money on merch, holy shit, is hardly new. There was that controversy in May when the Disney store said they had no plans to make new Leia merchandise; people got pissed, and Disney changed their tune. There was similar frustration surrounding a lack of Black Widow items when The Avengers came out. Companies like WeLoveFine and Her Universe are working on evening the gender gap, and of course there are individual sellers on sites like Etsy who have adopted the “If there official merch doesn’t satisfy, I will make what I want my own damn self” attitude.

But the official studios need to step up to the plate, too. After all, so much of the success of these big-budget superhero movies is judged based on how many toys they sell. And people can’t spend money on female superhero merch if you don’t flipping give it to us.