Supergirl Preview: Brainy Gets (Kind of) Physical | The Mary Sue 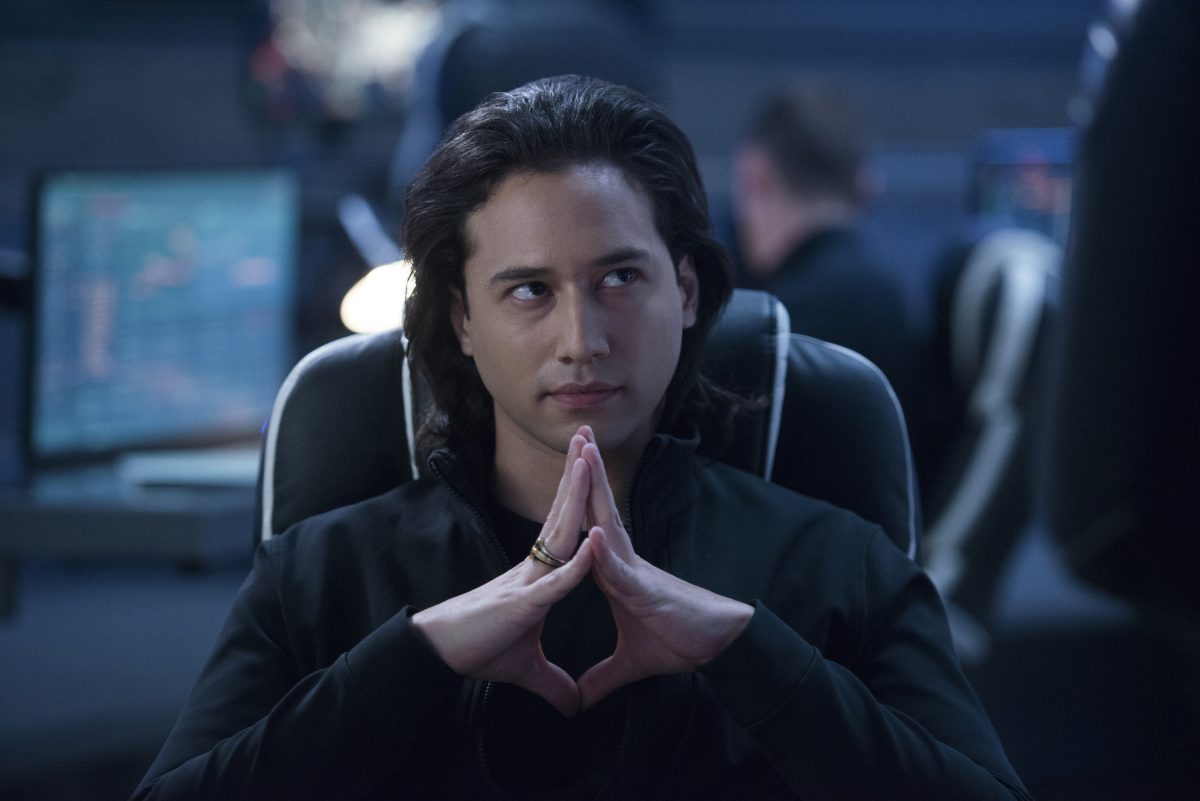 The addition of Jesse Rath as Brainiac Five in the Supergirl universe last season brought some great humor and unexpected heart to the show. With Rath’s upgrade this season to full series regular status and Brainy taking over Winn’s (Jeremy Jordan) duties at the DEO, we’ve seen a lot more of our favorite techno-organic know-it-all, but in Sunday’s Thanksgiving themed episode, entitled “A Call to Arms,” we’ll something new from Brainy and Rath: his awesome fighting skills.

We talked with Rath on the set of Supergirl in Vancouver and got the inside scoop on the fight scene.

“All of the super friends come together for a Thanksgiving dinner and like pretty much every Supergirl get together … something happens, and we’re forced to scatter and go off and try to save the city,” Rath explained, which leads to a scene where we’ll see, in Rath’s words, “Brainiac get froggy with a couple Children of Liberty thugs.”

We’ve never seen Brainy really fight before on the show, so Rath and the stunt team took it as an opportunity to explore who Brainy is as a character and a fighter. In this instance, Brainy uses that level-twelve intellect of his to keep ahead of his opponents and barely move.

“I thought it was such a cool way to approach a scene that Brainy will do everything he can not to fight,” Rath said. “He uses violence as a last resort, so he always uses his brain,” to get out of tough situations, but in this case, the Children of Liberty leave him with no choice but to kick some ass.

“The way he fights is by barley lifting a finger,” Rath described. “He keeps his hands behind his back.” We’ll also see Brainy using his opponents’ violence against each other in a fun way.

Creating the fight was a collaboration between Rath and the stunt crew of the show. “I had a couple ideas I talked to James, the stunt choreographer, about, and we ended up working it into the fight,” Rath shared. And he clearly had a blast doing it: “I was on another show where I did a lot of stunts, but I was always the guy getting beaten up. So, it’s very refreshing to be on the other side of that for a change.”

Not only was there standard fighting action, but Rath also got to do his own wire work for a very cool move that I won’t spoil. “I did it like a hundred times practicing with that wire,” Rath said. “It was a lot of fun. I was sore for weeks afterward.” As for whether we’ll see more of Brainy scrapping with the bad guys, Rath joked that he’d “demanded it.”

Brainy’s fighting skills aren’t the only new side of Brainy we’re seeing this season; we’re also getting hints of flirtation with Nicole Maines’ Nia Nal. “There will be more Brainy-Nia scenes to come,” Rath previewed. “It’s still just as awkward as ever. That’s something that we have a lot of fun playing with …They’re painfully sweet.”

We’ll also see Brainy working in the new dynamic of the DEO, as Colonel Hayley continues to supervise Alex. “His allegiance will always be to the Danvers sisters,” Rath explained. “He could care less what colonel Hayley is telling him to do.” In the next episode, we certainly see Brainy exploiting some loopholes to help them fight the looming threat of the Children of Liberty.

Fighting a villain that’s so topical has been “cathartic” for Rath: “Comic books in general and sci-fi …they’ve been used to put a mirror up against society. It’s always been a fun way of exploring those type of topics … It’s really cool to be on a show like Supergirl at this time in our history because of the topic that we’re talking about.”

This season, that means fighting an evil that can’t be overcome by a few punches or kryptonite. Our heroes are facing “the idea of fear and people’s fear of the unknown.” Still, it’s fun to take out some of the bad guys the old fashioned way, and Brainy’s big fight is a scene “that I’ve been waiting for for a long time,” Rath told us. “I’m excited for everyone to see that.”

Supergirl airs Sundays at 8 pm on The CW.