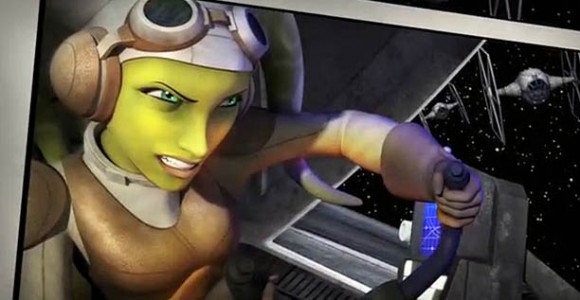 We’re inching closer to the fall premiere of Star Wars Rebels. This fan is incredibly excited for the animated series that will be the first on-screen representation of the formidable Lucasfilm and Disney combination. The primary group of protagonists were recently introduced in a series of videos and articles over the past two weeks, and toys based on some of those characters were unveiled at the New York Toy Fair. I was pleased to learn two of the five members of the main cast are females. I’m less thrilled those two characters, Sabine and Hera, were the last two to be introduced, and Hasbro isn’t including them in their first wave of figures for Star Wars Rebels.

Hera’s informal introduction came at the end of January when photos of a LEGO set featuring Ghost, a starship in Rebels, were leaked. The Twi’lek pilot was shown as a minfig on the box. Fans also learned about Sabine from packaging at Toy Fair. Anticipation built. We knew there were female characters, and we couldn’t wait to learn more. Then the introductions happened one by one, and they were male after male until only Hera and Sabine were left. Around the same time, photos surfacing from Toy Fair didn’t show either of the characters as figures in Hasbro’s new Star Wars Rebels series. It was a disappointment.

When we finally did meet Hera and Sabine, I was thrilled. Sabine is a feisty Mandalorian with artistic tendencies who leaves her mark à la “Kilroy was here” in an expression of defiance towards the growing Empire. Hera is a talented pilot, the “heart” of the team, and Ghost belongs to her. Both women appear to have depth, intriguing personalities, and cool character designs. I instantly liked them and felt even more frustrated they were pushed to the end of the line.

Hasbro did confirm to Newsarama they will release Hera and Sabine figures and will reveal the 3.75 inch toys at San Diego Comic-Con. That’s great news, but why leave them out in the first place? Is it because Disney views Star Wars Rebels toys as being for boys, as mentioned in this press release? If it is part of a bigger marketing message being handed down to Hasbro, then I have concerns about the merchandise in the franchise’s future.

I’m aware that as a 33-year-old adult female, I’m not their demographic in a variety of ways, but kids are. Think of all the little girls who are fans. What message does this boys’ club approach send to them? On the flip side, I imagine plenty of boys would want Hera and Sabine figures. Encouraging gender based marketing might mean more cash in pockets, but it’s a tactic I hope to see change in the coming years. Disney, Hasbro, and Lucasfilm are big enough companies that they could take the risk and be at the forefront of change instead of relying on tradition. Even if you accept the idea that more boys will buy the figures, can’t we do that without alienating the girls? 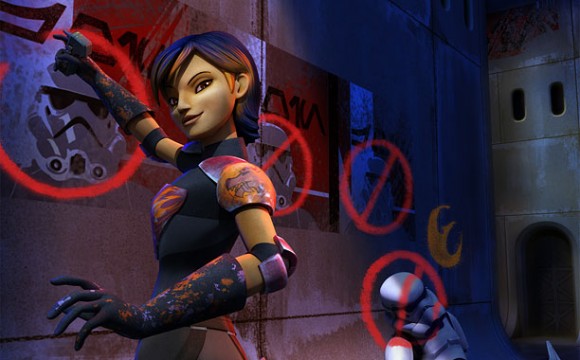 As far as the introductions of the characters to the series, it was a poor decision to leave the ladies for the end. Though Lucasfilm couldn’t comment on the specific order, they did confirm that Kanan and Hera were meant to be first and last – the leaders of the crew to bookend the set. I can understand that explanation, but why not push Sabine further up the list? They were conscious enough of the order to place Kanan and Hera deliberately, so I believe the remainder of the cast were announced in certain places for particular reasons. But, I’m at a loss to figure out what those reasons were. The presentation is especially confusing to me because Lucasfilm’s last animated series, Star Wars: The Clone Wars, starred a female protagonist fans of all ages and sexes rallied around.

When I shared my annoyances on social media, a common response was “they’re just saving the best for last.” Even though I do find Hera and Sabine to be the most appealing of the group, that reasoning isn’t valid. It’s a lazy excuse, and I believe people who rely on flimsy rationalizations like it don’t see the bigger picture. Fans can’t make any assumptions about women in Star Wars (or any other franchise). Steps are being made every day towards equal representation, but it’s an uphill battle.

The best example to illustrate this is an amusing and sad moment I experienced at DragonCon last year. I sat on a couple of panels in the Star Wars fan track and while discussing The Clone Wars, the subject of diversity came up. Several female characters played important roles over the course of the series, such as Ahsoka, Asajj Ventress, and Satine Kryze, and we saw a variety of aliens and races. I feel the show did a solid job at mixing it up.

One guy on the panel was oblivious though. When an audience member mentioned something about females in the original trilogy and what we hoped to see in Rebels, a male panelist responded and said women have always been important in the Star Wars saga. He followed that statement with something along the lines of: “There were a lot of women in the rebellion. There was Leia, Mon Mothma…” And then he trailed off because that’s all we saw in the original trilogy. Two is not a “lot” by any definition, but he didn’t hesitate in his response. It made me wonder how many fans share his perspective.

The Star Wars films have a track record of slighting the ladies. The Clone Wars cartoon seemed to go out of its way to create a more diverse playing field with very positive results. But there’s still an existing legacy, and I wish they would have been more conscious of the message they were sending (or weren’t sending, actually) in the rollout.

To make myself clear, I am still very much looking forward to the series. I have faith in the crew and cast and trust executive producers Dave Filoni and Greg Weisman to develop all the characters. Both of them have positive track records, especially when it comes to creating well-rounded female characters. You only have to look at Ahsoka in The Clone Wars and Demona in Gargoyles for proof.

I also appreciate the diversity not only in the cast of Rebels but also in the voice talent and the behind the scenes crew we’ve seen in the introduction videos. Women are definitely involved in the series, and I’m not discounting that at all. It’s very encouraging. But the way the introductions of Hera and Sabine were handled for both the series and especially the toys left me, a female fan of Star Wars, feeling like a marginalized afterthought. Regardless of the intent, that’s how the actions came across. I hope it’s something they take into consideration when it comes time to make announcements for Episode VII.

Amy Ratcliffe is addicted to Star Wars, coffee, and writing. You can follow her on Twitter at @amy_geek and keep up with all things geeky at her blog.