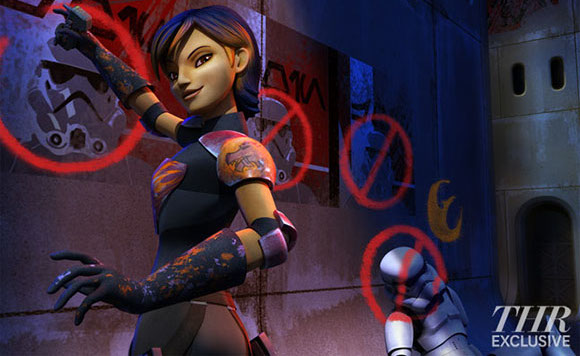 We’ve already found out about a few characters from Star Wars Rebels, Disney’s answer to The Clone Wars. There’s the big bad Imperial Inquisitor, a grumpy astromech named Chopper, a “cowboy Jedi” named Kanan, and said cowboy Jedi’s crew. Of those, only one of them, Hera Syndulla, is a female, and all we know about her so far is what can be gleaned from LEGO packaging. So you’ll understand why I say Sabine is the first post-Disney purchase female character we’ve actually gotten to know a bit.

I think it’s going to be a long and beautiful relationship.

First off: She’s a Mandalorian! And she won’t be having with any dull, boring armor, because she’s also an artist with a particular affinity for leaving “the Rebels were here” graffiti tags on the scene whenever she and her buds mess with some Imperials. CG supervisor of lighting and FX Joel Aron notes that Sabine adds “something that we haven’t really seen before in the Star Wars universe. You have a character that is expressively creative through art—whether it’s the color of her hair or what she’s done to her armor.”

One outlet for Sabine’s creativity? Explosives. Voice actress Tiya Sircar notes that her character “likes to blow things up, [and] she does it with flair, because she’s also an artist. She’s pretty rad.” Other adjectives Sircar throws around to describe her character: “Sassy,” “feisty,” “cool,” “smart,” and “kind of a tomboy.”

And yeah, I do wish the first official pic of a new female character under Disney’s reign wasn’t in butt pose. I really, really do. Especially considering we’re talking about a kid’s show here. But (no pun intended, I swear). I’m putting that aside as a marketing fail and letting my inner child be really excited about this character. Smart, spunky, creative, and good with explosives? This is exactly the sort of character I totally would’ve dug back when I was a part of Disney XD’s target audience (and maybe now, too *eyedart*).

And let’s also talk about how the first female character Disney’s introduced is a woman of color, and is voiced by a woman of color. I’ll start: It’s wonderful. Even better because it seems like Sabine will be a pretty major character in Star Wars Rebels. Representation is always essential, but it gains that extra little twinge of “Holy crap, there needs to be more of this” when you look at kid’s shows and movies. They arguably have a bigger impact than any other form of media on how we view the world and our place within it, since they give us some of our first exposure to, say, the possibility that a WOC can grow up to be a kick-ass explosives expert.

My hopes that the Star Wars sequels will have a diverse cast isn’t exactly high, because Hollywood’s track record, and Disney’s in particular (Disney’s *coughLoneRangercough*), isn’t all that good. And even for Star Wars Rebels, a single WOC does not a diverse cast make. But Sabine: It’s good—nay, excellent—to have you around. Here’s hoping you stay awhile.