What Does the Girl in the Most Internet Famous Vintage Lego Ad Think About Them Now? 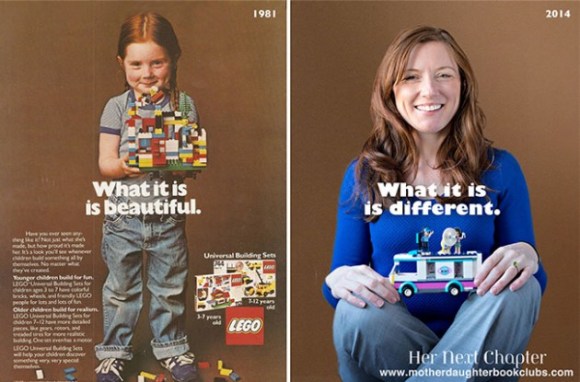 This 1981 advertisement for Lego sets has been given a renewed life in the reaction to Lego’s Friends line, a line of Lego products that remain the only ones marketed expressly at girls, with minifigures that are incompatible with other Lego products. Apparently this mostly passed by Rachel Giordano, the thirty-seven year old naturopathic doctor who was once the little girl featured in the ad. Women You Should Know.net tracked Giordano down to interview her and recreate the photo with a modern Friends set (a news caster van thats interior contains, not broadcasting equipment, but a makeup vanity).

You should go read their whole article, which relates Giordano’s account of creating the original ad as a child model, as well as a discussion of gendered toy marketing. Giordano hasn’t paid much attention to Lego in years, so the Friends line came as a bit of a surprise.

“In 1981,” explains Giordano, “LEGOs were ‘Universal Building Sets’ and that’s exactly what they were…for boys and girls. Toys are supposed to foster creativity. But nowadays, it seems that a lot more toys already have messages built into them before a child even opens the pink or blue package. In 1981, LEGOs were simple and gender-neutral, and the creativity of the child produced the message. In 2014, it’s the reverse: the toy delivers a message to the child, and this message is weirdly about gender.”

What Giordano missed in the intervening decades was a significant push on Lego’s part to corner the audience for boys toys. This meant associating their brand less with abstract ideas like “creativity” and more closely with fighting aliens, knights in castles, and cowboys; a minimum of female minifigures; eliminating actual children from their ads in favor of adult male voiceovers. Lego is entirely complicit in creating an environment where their toys are shelved in boy isles and not in girl isles in toy stores. The trouble for them now is one that many companies in the toy industry are facing: they want a larger share of the girl toy market.

Note I said “larger.” These are massive companies with well funded research divisions. They know that girls buy toys that are “for boys.” Because of how our society prizes masculinity and denigrates femininity, girls have a much easier path to embodying aspects of masculinity than boys have in embracing aspects of femininity. And that means that the line companies have to walk is harder, though no less cowardly: they have to find a way to make Lego products for girls without creating a perception that Legos are a girl toy. Because if a toy is gendered female, far, far fewer boys will buy it than girls will buy male-associated toys.

This is why, personally, I respect Nerf’s answer to the girl market for boy toys a lot more than the Lego Friends line. Nerf took some designs that would have fit in right alongside any other of their lines, colored them brightly in black and white and fuschias and sky blues, as if to say: we could have pretended that our toys lacked a gender affiliation by saying that camoflage and orange is just associated with hunting, but instead we made some brand new Nerf weapons just for girls. And the names! Every name in the line associates something feminine “belle,” “heartbreak,” “sweet,” “crush,” with combat, the core gameplay mechanic of Nerf toys. Belle becomes Rebelle, Heartbreak becomes Heartbreaker (and not a heartbreaker because you’re a beautiful, fickle woman, but because you have a bow and will shoot a person in the heart with it), Sweet becomes Sweet Revenge, and Crush… ok, crush is still crush, but as in crush your enemies. The Rebelle line says: Nerf guns are for girls too, and they can can play with the boys, just how the boys play.

On the other hand, the Lego friends line set in a different town than every other Lego set that depicts real world city life. The minifigures have parts and hand sizes that prevent them from holding the same objects as regular Lego minifigures and swapping accessories like hair or headgear. What Friends says is: we made new Legos for girls, because our other Lego sets, even the ones featuring heavily female fandoms (Harry Potter, for example), were for boys. You can tell, because Legos for girls have their own world and are physically interchangeable from the boy ones. The boys are playing over here. The girls can play over there.

Is all of this nuance likely to be lost on little kids? Of course. But that doesn’t mean we shouldn’t hold companies accountable, because it’s certainly not lost on them. And it doesn’t mean that we shouldn’t ask companies to be brave enough to challenge societal stereotypes. We hold them accountable for plenty of other unethical but profitable business decisions, after all.

In conclusion, read the whole article with Dr. Giordano at Women You Should Know.net.