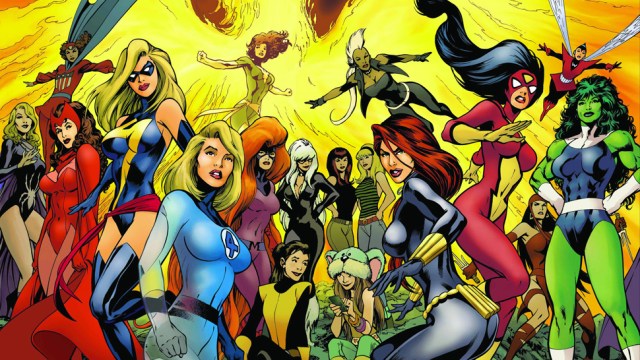 Marvel’s Victoria Alonso said some very important things this weekend. Let’s make sure everyone hears them.

Alonso is Marvel’s Executive Vice President of Visual Effects and Post Production and gave the keynote address at the Visual Effects Society Production Summit on Saturday. Thanks to reports from Variety and Deadline we know she said some pretty amazing things about women’s representation at Marvel Entertainment.

“I love the fact that you allowed a woman to talk to you this early in the morning,” Alonso told the mostly male audience.

“You’ve got to get the girls in here, boys. It’s better when it’s 50-50,” she continued. “I have been with you beautiful, handsome, talented, creative men in dark rooms for two decades and I can tell you those rooms are better when there are a few of us in them. So as you take this with you, please remember that it’s OK to allow the ladies in. They’re smart, they’re talented. They bring a balance that you need.”

And in a separate Q&A session she told Variety:

“This a tough road for women, not because it is a world of men, but because it takes a certain amount of time to be in a supervisory position, and by that time you are having to make a decision about having children or not. Which means you have to take a break. If you take a break, you’re out of the game, and once you’re out of the game, it’s hard to get back in the game.”

She said once women decide to have children, about half don’t come back to the business. “So we’re back to trying to fill in the 50% that left. We’re consistently trying to fill that gap of women who leave.”

She noted this is one of the major reasons she accepts speaking engagements, so young girls and women can see role models in key positions in the film industry.

“I used to look up to Kathy Kennedy,” Alonso said. “I didn’t know who she was, but I knew she produced E.T. and Schindler’s List. When I had lunch with her, I told everyone in the office. I was like a dork. I was a mess. But she had tears in her eyes (when I told her), ‘There are hundreds of thousands of little girls out there who think you’re the bomb.’”

Recently, Warner Bros. seemingly put the screws to Marvel Entertainment by announcing a solo Wonder Woman film and two POC-led solo films (although a Black Widow film almost happened much earlier than we thought). While speaking to reporters, the topic of a female superhero film from Marvel came up. Alonso said:

“If it were up to me, it would be today,” she said. Alonso then took a long pause to consider what to say next, finally smiling and declining to say more.

Asked whether Warner’s announcement of a Wonder Woman film has put more pressure on Marvel to do a female superhero movie, she said, “We have so much pressure internally for everything we do, we don’t need outside pressure. We are always so hard on ourselves.”

She said Marvel hopes Warner/DC is successful because “the success of superheroes, whether ours or others, is success for all of us. But I will be honored to be part of a woman leading the way.”

This isn’t the first time someone working for Marvel has asked for them to step up (We’ve also written a list of folks who’ll likely get a film before Captain Marvel or Black Panther.). They’ve even got high profile actresses chomping at the bit to play a major superheroine for them.

The wait is unbearable. Do you agree?