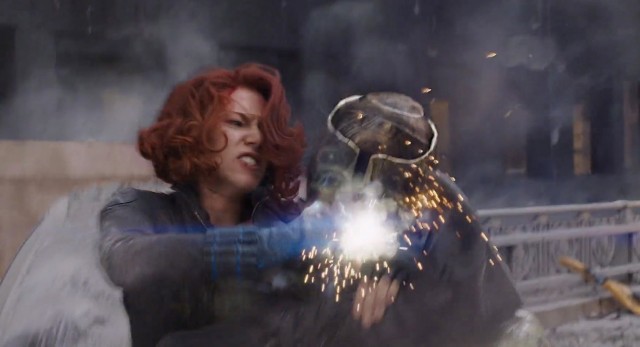 Saying ‘Joss Whedon’ and ‘feminist’ in the same sentence will get you a variety of responses. There are those who think him one of the best examples of the term while others think he shouldn’t be associated with it at all. However, I’m going to write about it today as recent events have made me realize there may be no harder thing one can choose to be than a feminist. Allow me to explain.

Let me start off by saying I love Joss Whedon. Buffy the Vampire was my EVERYTHING (yes, the original film, too). But loving Whedon doesn’t mean I should, or have to, like everything he does — in his career path or otherwise — just as being critical of something doesn’t mean you can’t also enjoy it. (A piece we published in January,”No Guilt In My Pleasures: How to Critique and Still Enjoy,” is a good one to point to here.)

Last week we were in an interesting position. It was a normal week at The Mary Sue — we posted about ridiculous reboots, revealed exclusive comic art, and showcased a young girl taking a stand against discrimination in video games. This is just a small sampling of the type of things we write about on a daily basis. We’re known for posting silly things with major GIF usage just as much as we’re known for criticizing sexism when we see it. We’re not Buzzfeed, we’re not Jezebel, we’re The Mary Sue.

Last week we did both and that day Whedon decided to call out a recently released Jurassic World clip as sexist while using one of those silly posts of ours to do it.

We’re too busy fanning ourselves to talk more about Chris Pratt in this #JurassicWorld clip. http://t.co/LZuZ45GQdw

There’s a few things to unpack here. First, The Mary Sue doesn’t call out every bit of sexism we see in pop culture. If we did, we’d probably never sleep. Next, we don’t always agree on what’s sexist between our staff let alone our readership. A contributor post critiquing Whedon’s feminism from 2011 is brought up by our detractors whenever we celebrate something he said as some sort of “gotcha!” Newsflash, no one agrees on everything. This is all OK! But TMS has also put itself in a position of calling out things we find problematic and as such, when we fail to call something out or simply fail in holding up our own standards, we are met with a mix of anger and disappointment from our readers.

But as we need to tell ourselves when picking up news stories now and then, and something we hope our readers keep in mind, being a feminist is hard. There is no way to be a “perfect feminist.” It doesn’t exist. Also, critiques come with the job. But in the case of Whedon’s call out of Jurassic World, as a team we were wholly disappointed.

Ok, he found the scene sexist. Totally valid and worth discussing. He chose to highlight this fact using Twitter’s new quote retweet feature which showed our tweet (embedded above for clarity) to his followers, linking to the post which had a total sum of four GIFs and the phrase “Hnnnnghghghghghhhhhhhh.”

Not exactly the kind of thing you stay up at night wishing a highly successful creator you’ve looked up to for years, with over a million followers, will promote.

From our point of view, not only did Whedon’s tweet suggest we were too busy discussing how attractive an actor was to criticize the sexism he felt was obvious, it also felt like he was policing our right to have those thoughts in the first place (which is another seriously problematic issue when discussing feminism). And then, as the internet news machine often does, Whedon’s tweet was picked up by no less than 25 entertainment and news websites; Time, The Hollywood Reporter, and The Guardian among them. Some of these articles mentioned we were a feminist site, some ignored us completely. And hey, great! Joss Whedon follows us on Twitter and linked to our site! Super cool. But we would have loved it if he used his status and position of privilege to elevate a few other posts we did that week as well. For instance, our exclusive which revealed “Comixology’s Recent Marvel Sale Boasted 7 Out of 10 Female-Led Titles in the Top 10” or perhaps “Invisible Women: Why Marvel’s Gamora & Black Widow Were Missing From Merchandise.”

Now, this isn’t to get into the “you should be talking about more important things!!” scenario we often hear when trying to criticize entertainment, people should criticize whatever they feel needs to be criticized whenever they want and no one’s response should be “there are starving children somewhere.” (Seriously, if that’s your only response to a critique, get off the internet and go help the starving children.) Also, this is Twitter and I know I personally miss a lot on a daily basis so I don’t fault him for not seeing those other pieces but did Whedon realize what he was doing by using our tweet for his purpose?

Badass Digest interviewed the director during the Avengers: Age of Ultron junket about his call out:

BD: You’re one of the few people willing to engage that. You’re releasing a billion dollar movie, which means you need to appeal to the widest audience as possible, but you’re also being vocal in your beliefs. A lot of people in your position are not. This week you came out and criticized Jurassic World’s clip – which I thought was terrific of you – which is maybe not the politically expedient way to approach it.

Whedon: You know, I honestly think that was bad form. I literally forgot that I don’t do that. I literally just went… I was so shocked! Honestly, I was shocked! Like a dowager – “Oh, good lawd!”

Whedon sees his tweet as “bad form” to a fellow director/Hollywood project but doesn’t seem to acknowledge that it’s weird for a man to call out a feminist website on their feminism, whether that was his intention or not. If he wanted to comment on the clip he could have easily linked straight to its YouTube link but again, he saw a thing in front of him, he commented. That’s what we all do. But it affected us in a major way.

Some more context: no one but the individual gets to decide what a person is allowed to be offended by. You’d think that goes without saying but without fail, every time we post about something WE are personally offended by, we have others saying “how dare you tell me what I can or can’t like.” Hey, internet citizen with keyboard access, we’re not! Say whatever you want but I will never stop telling you The Mary Sue writers are passionate people. When they write about something with vigor, you can be assured they genuinely have strong feelings about it. We do not write stories to “cause controversy” as many have accused us of in the past.

One day last week we posted about a comic illustration we felt was in poor taste for several, clearly identified reasons. Some people responded by telling us we needed to learn to take a joke. Others told our writer to drink bleach. A few days later we had “fun” with the Jurassic World clip and the response was “stop making jokes, this is serious!” Even simply calling a thing “not that great” will bring harsh words to your doorstep, but this brings us back to the point: being a feminist is hard. Even Whedon’s tweet was met with a mix of “yeah, you’re right, this is sexist!” to “hey, remember that time you had Loki call Black Widow a mewling quim?” You can’t “win.”

But that doesn’t mean you stop speaking up when you feel you should.

More from the Badass Digest interview:

BD: Do you think it’s generally important for you to speak out?

Whedon: Yes and no. I don’t think I should have tweeted about that movie; there are plenty of other things that bother and offend me in movies and I usually don’t tweet about them unless the movie is old, long over, I don’t want to be knocking ‘The Other Guy.’ I don’t want to set myself up as the arbiter of awesome. I was shocked, and I thought, ‘Come on, we can do better than this.’ I didn’t say the movie was a problem, just the clip. And having worked on a film of one of Crichton works, that’s sort of how that formula operates. But as a quasi-celebrity it’s uncouth of me to attack somebody else’s material.

But to speak up politically? It’s both necessary and damaging. It’s necessary because there’s so much that’s horrifying in our world, and so much that needs to be done. Not to say something about, I feel, is kind of morally bankrupt. At the same time, as an artist? It’s the worst thing I can do, because everything I make gets judged by that standard. “This movie isn’t feminist enough!” Well, this movie is about people, it’s not a polemic. It’s going to come from me, and I have everything in me – including that inchoate rage that wants to attack everybody. Once you define yourself, your art becomes more limited. If I could do it all again and remain anonymous… I don’t know that I would.

It never occurred to me that championing equality for women was going to be controversial. When I retweeted Anita Sarkeesian, it wasn’t because I was on a soap box. I was like, ‘This is interesting guys, check it out!’ I had no idea what I was stepping into… and I’m not sorry I did. Since the damage is done, I’m going to continue to speak when I think it’s appropriate. And occasionally when I don’t!

Some great points there but it’s also important to note that sometimes when you think you’re “championing women” you’re actually hurting women in the process, and that’s something every ally needs to consider. Also, being an ally/feminist means you’re a “work in progress” and that you can always learn more and do more while striving to be more supportive and inclusive. Once again, there is no “perfect feminist.”

So no, The Mary Sue isn’t going to stop criticizing things we feel should be criticized. We’re also not going to stop acting ridiculous. That’s just who we are. Would we love to see people talking about and sharing things like our Game Changer series, transgender issues, diversity in our media, or the amazing work being done by women in the comics industry just as much, if not more than, the “negative” things we see in the world? Absolutely.

We’re also going to keep hoping for major news outlets to listen when everyone talks about sexism, not just famous Hollywood directors on the eve of their superhero sequel.