Reconsidering the Feminism of Joss Whedon | The Mary Sue

Reconsidering the Feminism of Joss Whedon 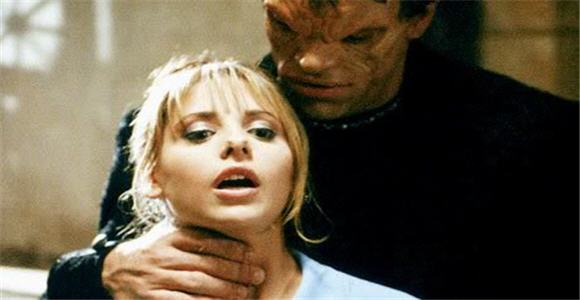 The facts are these: Joss Whedon is lauded as being one of the most forward-thinking show creators and writers currently wielding his craft today. The famous exchange between Whedon and a reporter – Why do you write these strong female characters? Because you’re still asking me that question – is bandied around the internet on a frequent basis. (Although this exchange was of his own imagining.) He’s praised for his interesting and multiform characters. Why, in these very pages, I’ve given him a share of credit myself.

He’s earned the moniker of feminist seemingly through just the creation of strong female characters alone. But, as friend and scholar Jake says, “Having a girl beat up guys is not equivalent to a strong female character when they ALWAYS, CONSTANTLY depend on men.” So true! Let’s consider some of his body of work as we undertake the Topic that Made the Fanboys Cry: Joss Whedon’s feminism.

The infamous Season 5 Buffybot was Whedon’s winking homage to The Stepford Wives, an automaton that existed literally to please men. While the Buffybot was an over-the-top mockery of Buffy Proper’s insecure need to please, a story gimmick ultimately discarded in favor of the real thing (in the reasonably well done episode “Intervention”), the under girders of the Buffyverse were deftly exposed.

Buffy, for all her killing vamps and breaking stuff, is rather a weak character. Let’s consider that she, as a Slayer, descends from a line that was literally created by men – a formation that stems directly from the male anxiety over an inability to create life the way that women do. And inherently problematic is the idea of the Watcher, a predominantly male presence that is the male gaze made manifest – a source of constant looking that is an explicit form of control.

And Buffy is textually weak in all her relationships. She falls apart not only when Angel leaves her, but when Parker (yeah, you don’t remember him, either) doesn’t want to pursue more than a one-night stand with her, too. And Riley, well. Riley. Despite being an almost universally despised character, Whedon sends Riley out in a flurry of pique at Buffy, after being caught having his blood sucked by a vampiress in a modern-day opium den. Let’s get that one sorted: Riley sexually undermines his girlfriend of over a year with a vampire, then delivers her an ultimatum that she must essentially get over it, or he’s leaving on a jet plane, don’t know when he’ll be back again (never come back, Riley). She reacts with the appropriate level of scorn, before Xander, the Chronicler of Buffy’s Failures, lectures her on her failure as a girlfriend to Riley, her lack of adequate emotional support, her once-in-a-lifetime chance with this hulking cornfed sad sack – and she goes running after the helicopter like a dog in heat! It’s truly infuriating. To top things off, Xander goes home to his loving, suitable girlfriend Anya – whom he near-constantly belittles, but who makes him feel “like a man.”

And this is how it goes, time and time again on the show. The strong female characters are sublimated to the weaker, childish males’ needs – and Xander is the worst perpetrator of them all. Aside from the whole ditching-a-1000-year-old-demon-at-the-altar thing, I’m sure you all remember Cordelia? Cordelia, of course, was one of the two most sexually aware and confident women on BtVS (I’ll get to the other in a minute). What this meant was that she needed to be punished, and shamed, before being sent packing to Angel. Xander, who was always so far beneath her that the show acknowledged it before daintily pushing that fact aside, made Cordelia into his girlfriend and then routinely degraded her in the way women have been so quickly depleted for centuries – sexual humiliation. Take this exchange:

CORDELIA: I can’t even believe you. You dragged me out of bed for a ride? What am I, mass transportation?

XANDER: That’s what a lot of the guys say, but it’s just locker room talk. I wouldn’t pay it any mind.

Of course, after she breaks up with him, he plans to take her by force – in “”Bewitched, Bothered and Bewildered,” Xander casts a spell to make Cordelia fall in love with him. The fact that it backfires doesn’t make this episode any less horrifying, since every woman in town begins to throw herself at Xander – which is the fantasy of every Nice Guy ™ that ever walked the planet. (See also.)

And then, once Cordelia and Xander are back together, he cheats on her with Willow, a romance that exists literally to shepherd her off the show. For good measure, Whedon writes in a plotline that leaves the intelligent Cordelia destitute and unable to go to USC, Duke or Columbia. Welp. Surely there are some intelligent and sexual women who are allowed to flourish on this show, right?

As has been pointed out by the magnificent Buffy scholar Eleusis Walks (to whose blog you should go post haste following this article), Faith is essentially a foil for Buffy, her shadow self. Whereas Buffy has approved-by-Whedon sex with her steadfast boyfriends whom she loves, Faith is a sexual free agent. When Buffy has a one-night stand, it leaves her scarred and miserable; when Faith has one-night stands, she uses them for revelry around a table at the Bronze. She’s allowed to enjoy this privilege for about half a season before we find out the truth – she’s crazy! A hysterical womb on two legs. After this point (Season 3, “Bad Girls”), Faith is verbally and physically abused for her sexual agency. Willow regularly calls her a slut. Tara can smell something off about her when Faith is in Buffy’s body. Her inability to restrain her out-of-control desires leads her to pursue seduction of Angel, who resists, and delivers her into Buffy’s pure and inviolable waiting hands.

You’ll recall when Angel did take Buffy, he lost his soul and killed another charming brunette, Jenny Calendar – an act that several of the characters explicitly blame on Buffy’s sexual agency. The next time Buffy gets out of control in bed, she’s trapped in a vacuum of endless sex and nearly brings a house down around the Initiative’s ears (Season 4, “Where the Wild Things Are”). Again and again, we’re shown that a woman’s sexual actions are dangerous – unless, of course, they’re done by a robot. Then it’s all fun and games.