We Give Facebook Home a Spin, Desperately Try to Not Hate It 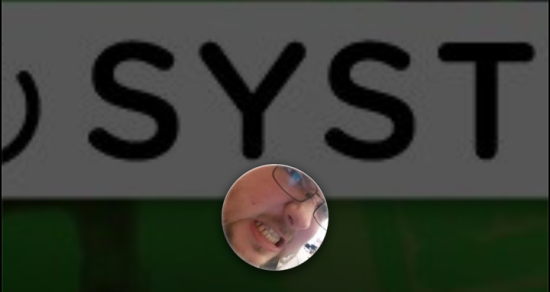 I had a working cell phone once. In the before time. In the long, long ago. That’s all over now. It’s Facebook Home launch day for those “lucky” enough to have one of the few handsets it’s rolling out for today. I have a Galaxy S III while the other chumps here at Geekosystem have iPhones, so I took one for the team and installed Facebook Home. Like the Borg, my phone has been assimilated and turned into something dark, twisted, and evil. That might be a slight overstatement, but it is quite bad. Who knew I could ever miss Touch Whiz?

Let me start by saying this is far from a full review. I installed Facebook Home about 90 minutes ago, played with it while eating noodles, and encouraged my Facebook friends to bomb my messages to get the full “Chat Heads” experience. I’m frustrated with its layout, its launcher, and how it has seemingly gone out of its way to make non-Facebook apps frustrating and difficult to use. 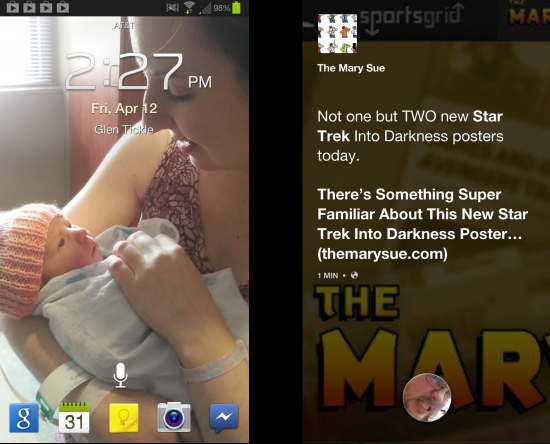 On the left is my favorite photograph of my wife and daughter, easy access to my phone’s voice commands, and my most frequently used apps. On the right, a Facebook update from The Mary Sue, and my own face. As shown in the launch video for Home, the posts scroll automatically like a slideshow, or I can flick through them.

I’ve never counted, but I imagine I look at the lock screen of my phone about a hundred million times a day. When I do that, I’d rather see my lovely wife holding our beautiful little peanut of a baby girl than whatever nonsense my friends are posting on Facebook. That’s not to say The Mary Sue is nonsense. It’s a wonderful site, run by great people, but we’ve already established that I hate my Facebook friends.

I miss the easy access to my frequently used apps. Instead of having five apps I want to have quick access to, I only have easy access to Facebook Messenger, the last app that I’ve opened, and Facebook Home’s launcher — Its terrible, terrible launcher.

With Android, I had my apps neatly sorted into folders on my home screen. I never had to dig around to find an app. I knew where they were. Now to find something that isn’t Facebook I’m forced to use Home’s own launcher. It’s easy enough to get to a list of all my apps, but I have a lot of them, and I don’t want to scroll through them all every time I want to open something.

There are pages to the launcher as well, but you can’t nest the apps into folders, and there are only six pages. The problem is that my apps aren’t sorted onto these pages. They’re just kind of thrown around randomly, and I don’t want to have to take the time to rearrange all my apps into a useful configuration.

As I suspected from the launch video, I hate Chat Heads. What Facebook touted as a great new feature is really just a frustrating pop-up of your friend’s face over whatever it is you’re trying to do. 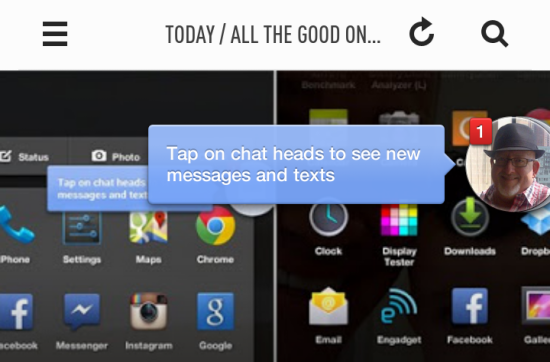 My friend Mark is a great guy, when I’m looking through articles on Feedly, I don’t particularly feel the need to stare at him. It’s not an alert that pops up to let you know you have a message and then fades away into the background. Mark’s face will stay on the top of your screen until you read the message and dismiss it. It’s the worst. (Not Mark’s face. That’s fine. Chat Heads is the worst.)

In the launch video it appeared the Chat Heads were cumulative, but they stack up one on top of the other, and don’t take up more space with each one. The only fun thing I’ve found about Chat Head is that if you have a few messages from friends you get to drag their faces around the screen and they follow your finger like mouse trails. 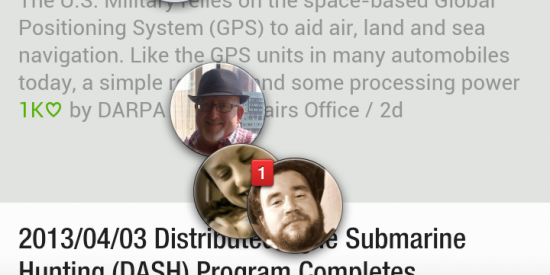 Some of this might just be simple design oversights that will be fixed soon. Facebook has promised a new update to Home every month, so maybe it will be more useful and less frustrating come May, but for now it’s a mess. I’m willing to give it through the weekend to see if it’s just something that takes some getting used to. If my opinion changes I’ll come back to this on Sunday, but I’m not anticipating warming up to this any time soon.