Get ready to hear everyone complain. Facebook appears to be slowly rolling out a new feature that lets you attach specific actions to your status updates. The feature lets you select from a very limited list of things to include in your update. I saw the above notice yesterday afternoon, and posted a screenshot to the Geekosystem Facebook page. Some readers have reported seeing the new feature as early as last week, and other are reporting that this new feature is “stupid”.

So what exactly is this new feature? It lets you select categories of what you might be updating about: 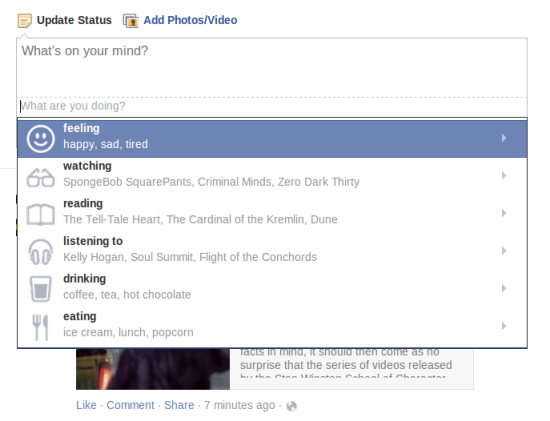 Clearly, if you are not feeling, watching, reading, listening, drinking, or eating then you have nothing worth updating Facebook about. Those limited categories all have even more limited options. Say, for example, you’re listening to a song and want to tell everyone about it. You would go under “Listening To” and make a selection: 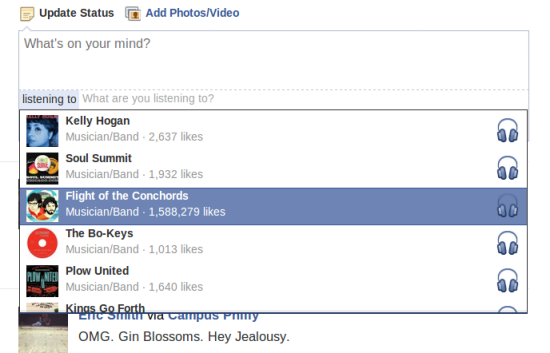 Great! As long as you’re listening to Kelly Hogan or Flight of the Conchords you’re all set. You only seem to have ten options to choose from, but it does look like Facebook is rotating them. The list of options I’m seeing this morning is different than the ones in the picture above.

The options listed in the different categories don’t seem to be coming from things I’ve “liked” on Facebook, so I’m not sure how they’re being generated. My guess is that they’re simply stand-in options until the new feature is fully formed. Then we’ll be able to select from a wider selection of Facebook pages.

The option to post about what you’re eating is probably something that will catch on considering how many photographs of food I see in my news feed every day. As for the rest of the options, I’m not sure they’ll get much use.