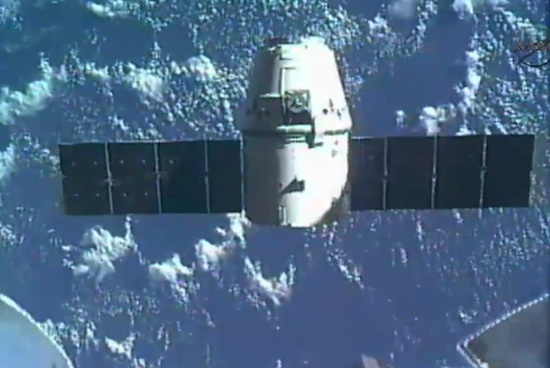 At 11:42 AM EDT today,  SpaceX’s commercial spaceship Dragon splashed down in the Pacific ocean 500 miles off the coast of southern California. It’s safe arrival puts an end to the historic mission that saw the first commercial company fly to and berth with the International Space Station, perhaps beginning what some are calling a new era in American spaceflight.

The Dragon reached the ISS three days after its May 22 launch aboard a Falcon 9 rocket. The launch had been a long time coming, originally announced last year and suffering an abort during the first attempt at T-0.5 seconds. The cause of the automatic abort was eventually traced to a faulty valve in the rocket’s number five engine, which was fixed in time for a second launch attempt.

As a test flight, the Dragon first had to demonstrate its ability to maneuver safely around the space station, starting and stopping on command. Once these tests were completed, the craft was cleared to approach the station where astronauts used the robotic Canada arm to grab the Dragon and berth it with the station.

Dragon spent five days attached to the station while astronauts unloaded its 1,200 pounds of cargo and refilled the capsule with 1,300 pounds of material for a return voyage to Earth. Early this morning, the Dragon separated from the station, and began its descent to Earth — a journey of over 250 miles which it completed in just under an hour. Dragon even managed to splashdown a full two minutes earlier than NASA had anticipated.

As the Dragon bobs in the Pacific, waiting to be brought back to shore, most are looking forward to what’s next. For SpaceX, founder Elon Musk brought attention to plans for future Dragon capsules to shirk water landings and come down softly over land using the craft’s integrated Draco thrusters. From Twitter:

The successful conclusion of the mission has not only kicked off the beginning of SpaceX’s contract to resupply the ISS, but demonstrated that a commercial company can build, launch, and manage a spacecraft engaging in the complex activities that had been the exclusive realm of government organizations. Though SpaceX was the first to the station, there are a host of other companies looking to grab resupply contracts and compete for eventual manned missions. For instance, Antares is planning to have their own inaugural trip to the ISS later this summer with their Cygnus craft.

The next big milestone, of course, will be commercial vehicles carrying crew into space. A goal which, according to Musk, might be sooner than we think. From NASA:

“We are hoping to continue working with NASA and hopefully flying crew within three years […] This was a crucial step and makes the chances of becoming a multi planet species more likely.”

One small step for commercial spaceflight might just be a giant leap for mankind.

(via NASA, image via NASA TV)