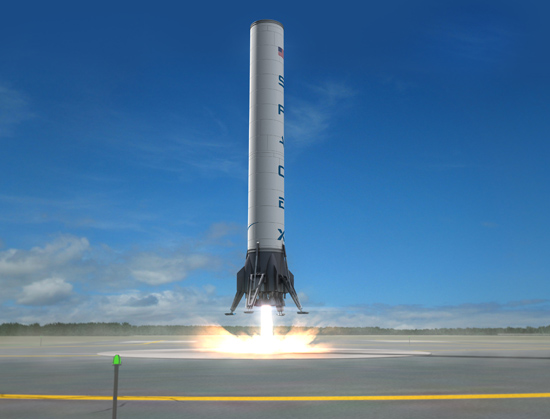 In a recent announcement at the National Press Club, SpaceX founder Elon Musk announced plans to develop an entirely reusable rocket system. The company’s Dragon capsule, which could soon ferry astronauts and cargo to the International Space Station as part of NASA’s fostering of private space industries, is already planned to be reusable. However, this new plan would call for the first and second stages of the rocket that carried the Dragon aloft to return to Earth in one piece.

Reusability isn’t exactly new to the space industry — the Space Shuttle, for instance, boasted a reusable orbiter and solid rocket booster. However, Musk’s bold plan would have a both the upper and lower stages of a two-stage rocket return to Earth, and land upright without parachutes.

In the announcement, Musk described the reusable rocket system as separate from the work with NASA, calling it a “parallel thing.” However, he did confirm that recent troubles with the Russian Soyuz craft will likely delay a planned docking between an unmanned Dragon capsule and the ISS. Musk also said that the only thing standing between the Dragon and manned flights was the development of a launch escape system that could carry the crew capsule safely away from the rocket in the event of an accident at lift-off. Such systems can be seen on the Apollo vehicles, which had a series of rockets attached to a spike at the tip of the Saturn V’s nose cone.

In the case of the Dragon capsule, the launch-escape system would utilize small rocket motors attached directly to the capsule. These are the same motors which could allow the Dragon to make soft landings on land without parachutes and, perhaps, someday allow the Dragon to land on other planets. This theme, of SpaceX vehicles being used to visit other planets is one Musk has voiced before, and was brought up again at the Press Club announcement.

Regarding SpaceX’s plan for a fully reusable rocket, it does seem odd that a company aiming to lower the price of space travel would develop a system that requires extra fuel to make soft landings for components that would normally be discarded. Though I am no expert, I’d posit that SpaceX is banking on making their money through fast, frequent launches that reuse their vehicles. It may be the that the cost of fuel for each launch is piddling compared to how much the company believes it can make with more launches with a short turn around.

Of course, an announcement and a cool animation by itself does not a successful space program make. After all, we’ve been promised moonbases and mars missions for decades from NASA and are only just now starting to see active signs of a manned deep space missions from the agency. That said, however, it is a really cool animation. Watch and enjoy.