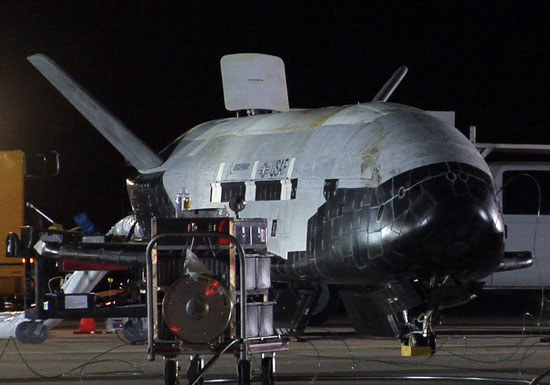 After having spent over a year in space, the United States Air Force’s secret X-37B spacecraft will be coming in for a landing sometime in the next few weeks. The miniature spaceplane, which looks like a 30 foot long Space Shuttle with angled fins and a bulbous rear end, has apparently performed exceedingly well in its mission — except what that mission is remains a secret.

Originally launched on March 5, 2011, the X-37B is expected to land at Vandenberg Air Force Base in California around early to mid June. In a release, the 30th Space Wing said that they would be monitoring the automated landing of the craft as it returns from orbit pending “technical and weather considerations.” 30th Space Wing commander and owner of America’s coolest job title Col. Nina Armagno is quoted as saying:

“The men and women of Team Vandenberg are ready to execute safe landing operations anytime and at a moment’s notice.”

This is the second orbital mission for the X-37B, and the first for this particular vehicle. The first mission was launched on April 22, 2010 and lasted until December 3 of that year.

These sorts of long-duration missions are part of what the spaceplane is designed to perform. After being launched into orbit atop a rocket, the craft’s cargo doors open — similar to the Space Shuttle — and a solar panel is unfurled to provide power for the craft. Observations from amateur astronomers have suggested that the craft is capable of changing its orbit once in space, giving it some surprising flexibility.

So far, all anyone will say about this mission is that it was meant to test “space technologies.” During its time in space, the Pentagon has denied that the spaceplane is being used to develop orbital weapons, and claims that it was being used to spy on China’s Tiangong-1 space station were refuted. It’s possible that the Air Force is still testing the craft, though the craft’s long duration missions and reusability would make it an excellent spy craft.

Though its mission will soon be at an end, it’s almost certain that we won’t ever know what was accomplished. I suppose the most we can hope for are some cool pictures.