How the United States Will Return to Space 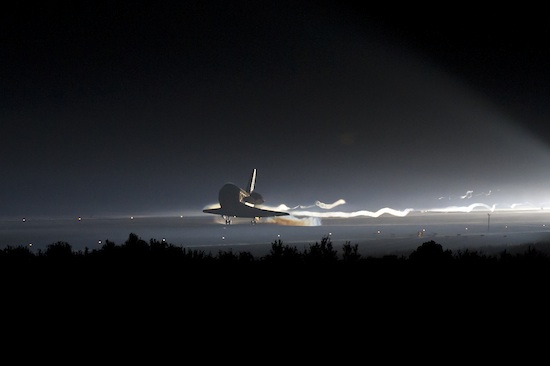 On July 21, the Space Shuttle Atlantis landed for the last time, ending three decades of missions in space. With the conclusion of the Shuttle program, the quest to restore the United States’ ability to send astronauts beyond the Earth became far more urgent. Though NASA has been working on a new vehicle since 2004, it also began supporting a number of home-grown commercial space operations. As part of the Commercial Crew Development initiative, four companies have started work on spacecraft that will eventually carry astronauts to the International Space Station — and perhaps beyond. 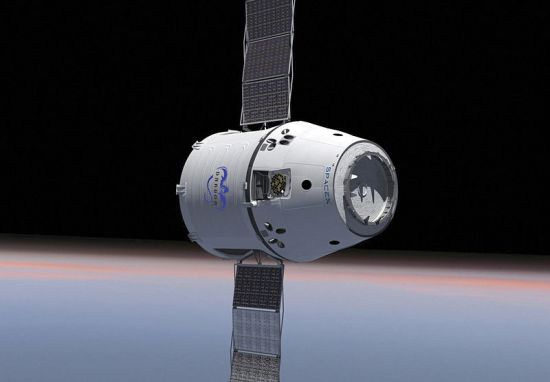 A simulated Dragon in orbit, via

Among the spacecraft currently in development, SpaceX’s Dragon is unique in that it is the only craft to have actually flown in space. Founded by PayPal creator Elon Musk, the company made history last year when they became the first commercial company to successfully send a spacecraft into orbit, return the craft to earth, and retrieve it.

Currently, SpaceX is working towards perfecting an unmanned version of the Dragon capsule. Like a future manned craft, it consists of a reusable capsule section atop a trunk portion which is jettisoned during re-entry. It’s designed to fly atop SpaceX’s Falcon 9 rocket and carry some 13,000 pounds of cargo into space. At the end of its mission, the Dragon splashes down in the ocean before being retrieved and prepped for reuse. 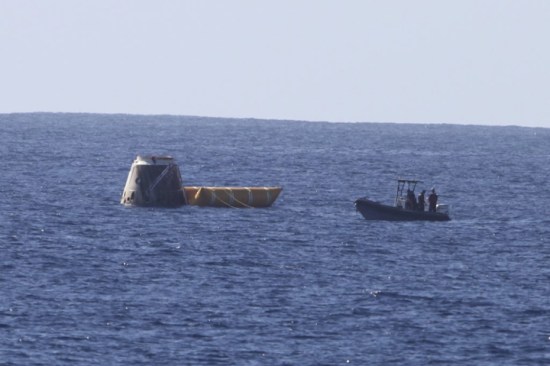 Recovery after a successful Dragon flight, via

Though the unmanned version of the craft is the immediate focus of Dragon development, SpaceX is actively working towards producing a manned spacecraft. This variant would seat seven astronauts, four more than the existing Soyuz and the older Apollo spacecraft. In fact, Musk has boasted that the entire habitable portion of a Soyuz spacecraft could fit inside his Dragon capsule.

Unique to the crewed version is an integrated launch escape system. Such systems have been a key element of manned rocket travel, and would allow the crew to escape an aborted mission by using smaller rockets to carry the capsule safely away from a malfunctioning vehicle. In the Apollo missions, the launch abort system consisted of several rockets clustered around a spike at the tip of the rocket — a similar arrangement is planned for NASA’s Orion vehicle as well.

However, the Dragon capsule plans to integrate these emergency rockets into the design of the spacecraft itself with eight SuperDraco thrusters attached to the rear of the capsule. In this configuration the mission could be aborted at any stage from launch to orbit, but more importantly the boosters would allow the Dragon to land overland — and even on the surface of another planet.

In fact, an eventual Mars mission is a dearly held goal of SpaceX, as you can see in this video.

While Martian aspirations are a long way off, there are more immediate plans for the Dragon. For instance, it’s slated to make history again this year when it will become the first commercial spacecraft to dock with the International Space Station. Though this will be an unmanned cargo mission, SpaceX has made it clear that a manned craft is just a few years behind. 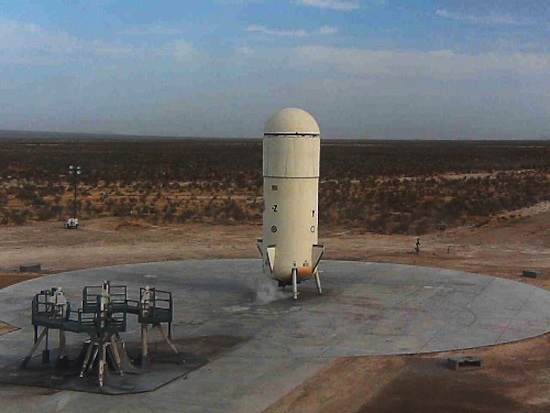 While Elon Musk has dominated the headlines with SpaceX, Amazon founder Jeff Bezos has been quietly working with his commercial space company Blue Origin. Though both companies are fueled by Silicon Valley money, Blue Origin has taken a very different approach to space travel.

Currently, the company has worked on their suborbital New Shepard launch vehicle. While it has relatively modest goals, it is unique in that it takes off and lands vertically – a characteristic called vertical take off, vertical landing or VTVL. The origin of a VTVL spacecraft can be traced back to the DC-X, a suborbital craft developed by McDonnell Douglas.

The vertical orientation has several advantages, most importantly that the craft can be serviced and reused quickly. It also cuts down on the cost of retrieving the craft once its mission is complete. 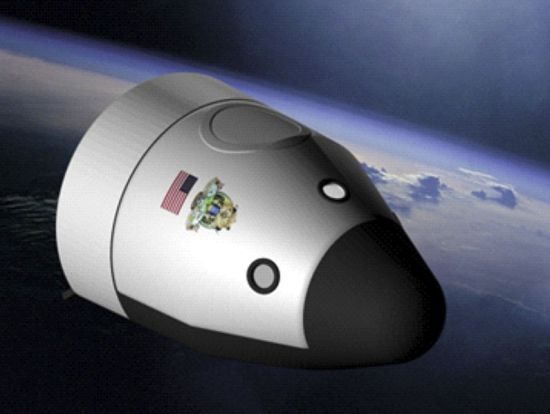 Though New Shepard has had a few successful test flights, it will only give its occupants a brief taste of spaceflight. However, Blue Origin has aspirations beyond the sub-orbital edge of space. The company has already won two contracts from NASA to begin development of a launch escape system and a “biconic crew capsule.”

The eventual goal is that Blue Origin will adapt and expand its VTVL rocket technology to create a multistage launch vehicle to carry the crew capsule to space. Like the New Shepard, the first stage booster would detach, return to Earth, and land upright. Meanwhile, the crew vehicle would continue on its mission, eventually parachuting in for a landing over land. 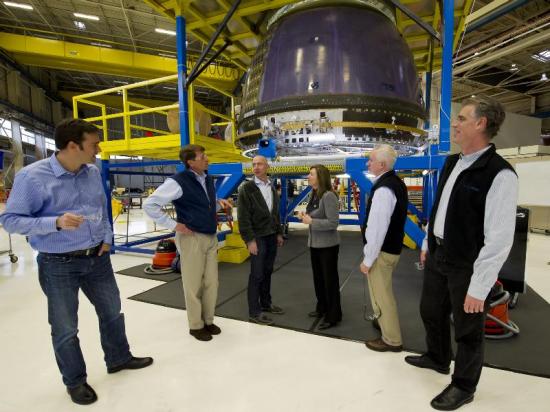 Though its spaceflight aspirations are still growing, Blue Origin has already shown its determination to make VTVL rocketry work. At the moment, they are the only company that has currently demonstrated the capability, though that might not last. Barely a year ago, SpaceX announced that it sought to construct a fully reusable, VTVL rocket system. 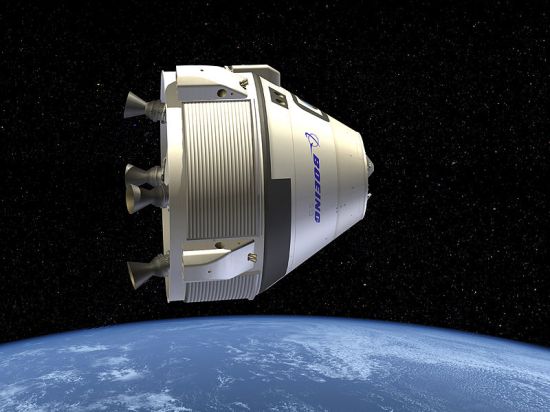 Though much of the attention surrounding America’s new spaceships has focused on the upstarts and the startups, the old guard is not being left out. Boeing, the company that worked on the ISS, the Space Shuttle, and the Apollo missions, has thrown its hat in as well. Their contribution, the CST 100, may one day carry astronauts to the ISS or to commercially built space stations. 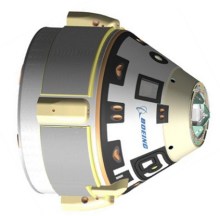 Once complete, the CST 100 will be able to carry seven astronauts, and takes design inspiration from the original Apollo capsule. Unlike some of the other spacecraft, the CST 100 is fairly vehicle agnostic, and can be fitted to several different rockets — including SpaceX’s Falcon 9. The CST 100 is also meant to be reused up to 10 times, and can remain in orbit for 210 days.

Interestingly, the CST 100 was developed as part of a partnership between Boeing and Bigelow Aerospace. Though Boeing has received millions of dollars from NASA as part of the Commercial Crew Development program, the company has maintained that it needs a destination besides the ISS to make the program financially viable for Boeing. Enter Bigelow, who have been working to bring inflatable, commercially produced space stations to orbit.

The partnership seems to have done well for all parties, and someday soon, the CST 100 may be taking astronauts to the ISS or one of Bigelow’s proposed spaceports. 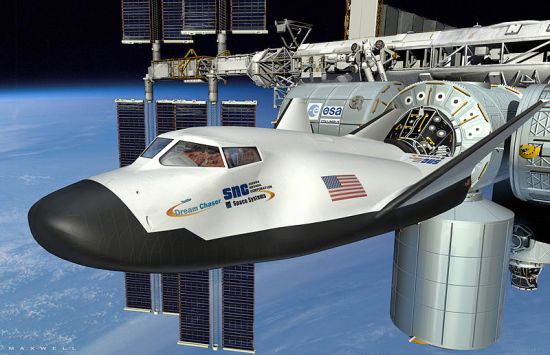 Rendering of the Dream Chaser, via

Based on nothing more than appearances, the next wave of American spacecraft would seem to have forgotten all about the venerable Space Shuttle. Not so for the Sierra Nevada Corporation whose whimsically named Dream Chaser spaceplane looks like the Shuttle’s little brother.

Unlike the capsule spacecraft, the Dream Chaser uses a lifting body and is intended to land at any commercial airport. To get to space, the seven person crew would board the Dream Chaser atop an Atlas V rocket in an arrangement similar to the the X-20 Dyna-Soar. Upon the completion of its mission, the Dream Chaser will re-enter the atmosphere and glide to a landing.

Though similar to the Shuttle, the Dream Chaser has several key improvements. Firstly, its engines burn ethanol and not the volatile fuels used in the Shuttle, meaning that it can be safely approached immediately after landing. Secondly, though it uses similar tiles to protect the craft from the heat of re-entry, these tiles are grouped into larger clusters. While the shuttle required individual tiles to be replaced between missions, it’s faster to replace the larger clusters, allowing the the Dream Chaser to be reused with less down time between missions. 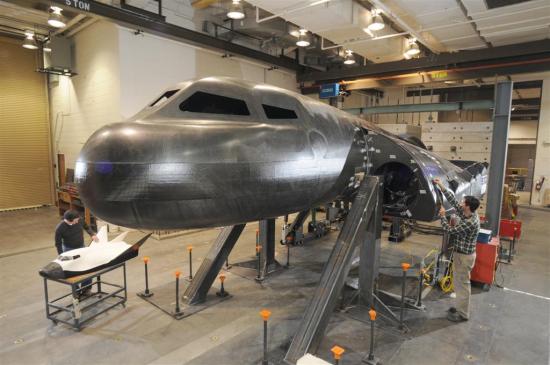 The completed primary structure of the Dream Chaser, via

Though the Dream Chaser craft is certainly ambitious,and unique, it has already reached a high level of development. This past February, Sierra Nevada delivered their first flight structure to NASA for testing. Though the commercial space industry has been a major focus for NASA and space exploration coverage, the space agency is hardly sitting idle. After the cancelation of the Constellation program, NASA has continued work on the retooled Orion Multi-Purpose Crew Vehicle.

While most of the commercial space endeavors have focused on low Earth orbit, Orion plans to go farther. Though it can, and probably will, service the International Space Station, it is designed for deep space missions — specifically to nearby asteroids and eventually Mars.

Like Apollo (and the CST 100 and the Dragon), Orion is a capsule craft. Two and a half times larger than the Apollo spacecraft, it is designed to carry four astronauts on extended missions up to six months away from Earth. It also features an “all glass” digital cockpit, derived from the Boeing 787 — a first for an American spacecraft. Like other forthcoming spacecraft, the Orion is also designed with reusability in mind. 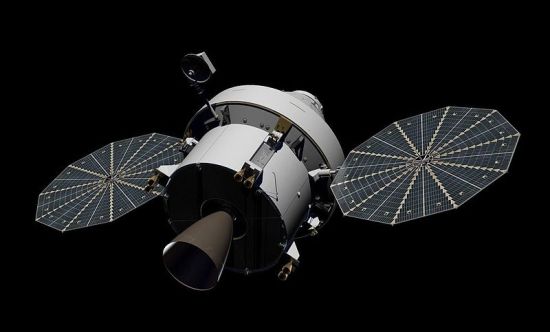 Rendering of Orion in flight, via

In space, it does away with Apollo’s bulky fuel cells, and uses fan-like solar panels similar to the Phoenix Mars lander. This makes the expendable service module much smaller and the entire craft more maneuverable. As for creature comforts, the craft sports a camping-style toilet, “relief tubes,” and a waste water recycling system which can produce water for drinking as well as for coolant.

To date, the Orion is being tested for a planned unmanned mission atop a Delta IV Heavy rocket in 2014. By 2019, it should be flying manned aboard NASA’s new launch vehicle, the Space Launch System.

In the past, Russian and American spacecraft have dominated the space above the Earth. Recently, European, Chinese, and other craft have begun to create an international presence in space, but most manned missions are still dominated by only a few types of craft

While the rise of commercial spacecraft will return the United States to space in the near term, it will also greatly diversify the number of spacecraft in use. For the first time in human history, humanity will have a variety of paths to space, bringing us closer to the eventual dream espoused by many of these upstart companies: Fast, cheap, safe access to the final frontier.

This post was brought to you by our partnership with Intel, who helps your imagination and innovation really blast off.