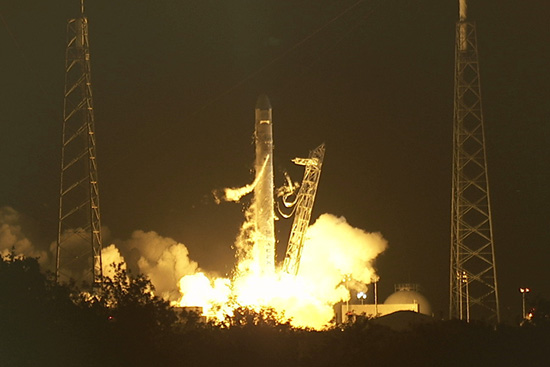 Commercial space company SpaceX has had a long road to this morning’s launch to the International Space Station. The mission, originally planned months ago, has seen repeated delays and a frustrating automatic abort earlier this week. Today’s launch seemed to make up for all of that, when the Falcon 9 rocket lifted flawlessly off the launchpad, carrying the Dragon spacecraft into orbit.

For the company founded by PayPal creator Elon Musk, the mission is the third Falcon 9 launch and the fifth successful consecutive launch. Their reusable Dragon spacecraft has been in orbit only one other time. Once the unmanned craft reaches the ISS, two days from now, the craft will perform a series of start and stop maneuvers to confirm that it is communicating correctly with the station before it is plucked up by the Canada arm and berthed to the station.

Assuming everything goes as it should, the Dragon will become the first commercial spacecraft to ever dock with the station — heralding a new age of private space industry that NASA plans to rely on for cargo resupply missions to and from the orbiting outpost, and eventually ferrying astronauts to low Earth orbit missions as well.

The mission, called Commercial Orbital Transportation Services Demo 2 or COTS 2, was delayed this past weekend when the vehicle’s onboard computer halted the launch at T-0.5 seconds. It had detected increasing pressure in the fifth of the Falcon’s nine Merlin 1 C engines, which was eventually traced to a broken valve. In series of last-minute repairs, SpaceX crews were able to make the rocket ready for launch well in advance of this morning’s 3:44 AM launch window.

In a statement from NASA, the space agency’s associate administrator for Human Exploration and Operations Mission Directorate William Gerstenmaier praised the company for making such a tight turn-around, saying:

“They stayed focused and kept moving forward […] Things are moving in the right direction.”

Onboard the Dragon were 1,200 pounds of non-essential cargo, including food, clothing, and experiments designed by school children. The spacecraft can carry some 7,300 pounds to orbit, but as this is still technically a test launch officials seemed to have erred on the side of caution. After remaining connected to the station for 13 days, astronauts will load the craft with used scientific equipment and detach the Dragon. Cleared of the station, the capsule spacecraft will descend back to Earth and splash down in the pacific ocean for recovery by SpaceX crews.

The Falcon 9 also carried more somber cargo: The cremated ashes of 308 individuals, which were secured in a canister within the rocket’s second stage. ABC news reports that the space funeral company Celestis arranged to have the ashes placed on board — among them James Doohan, who played “Scotty” on the classic Star Trek series, and astronaut Gordon Cooper. Doohan, along with 207 other individuals, were meant to have their ashes launched aboard an earlier, failed launch attempt by SpaceX. This time, their final voyage began without incident, and their remains will stay in orbit aboard the Falcon’s second stage for about a year before burning up on re-entry.

Not long after launch, Musk announced via Twitter that the rocket had performed perfectly and that the Dragon was in orbit:

Falcon flew perfectly!! Dragon in orbit, comm locked and solar arrays active!! Feels like a giant weight just came off my back :)

After months of work to make this mission happen, Musk and his company certainly deserve this time of celebration. Though the there is still a long mission ahead of them, the company is well on its way to making history and, perhaps, leading a new chapter in space flight.

(via NASA, SpaceX, image of COTS-2 launch via NASA)