Review: Not Even Farts Can Save A Million Ways to Die in the West

Spoilers below, but I'd prefer to call them warnings. 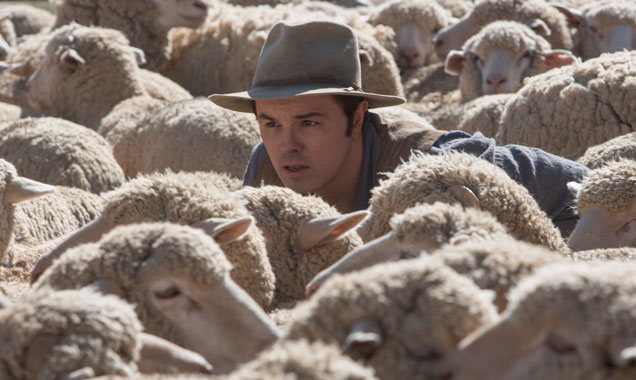 When I agreed to see A Million Ways to Die in the West I thought it wouldn’t fit as nicely into Team Geekosystem’s purview as MacFarlane’s other big project this year, Cosmos–but boy, was I wrong!  If there’s any beat this blog loves covering than space it’s fart news, and, much like the vast expanses of space, this is a movie that’s full of gas.

A Million Ways to Die follows dorky sheep-farmer Albert (MacFarlane, directing himself), and his  attempts to win back his girlfriend Louise (Amanda Seyfried) with the help of Anna (Charlize Theron), the new girl in town. At least, that’s kind of the plot. There’s also a lot of stuff about bravery, a sharp-shooting outlaw (poor, poor Liam Neeson) and Giovanni Ribisi trying to lose his virginity? Who knows. The “million ways” from the title serves a narrative purpose as well, introducing an endless parade of accidental and gruesome deaths that show just how shitty life was on the American frontier. It’s The Gashlycrumb Tinies done Family Guy style, and it works–or it would if endless farts weren’t there to steal the thunder.

Regarding said farts–this is not a movie that treats its actors well. This is a movie in which MacFarlane gets peed on by a sheep, gas is emitted from the wrong orifices, and a woefully miscast Liam Neeson moons the audience with a daisy stuck in his ass crack, so I probably shouldn’t have been surprised by the extended scene where Neil Patrick Harris shits into not one, but two, hats — but gentle innocent that I am, I was still disappointed. If you are planning to devote time or money into watching this movie, ask yourself first if you are okay with a scene in which Neil Patrick Harris trips on a hat filled with what is probably Hormel Chili. For the rest of us, there’s always Blended. 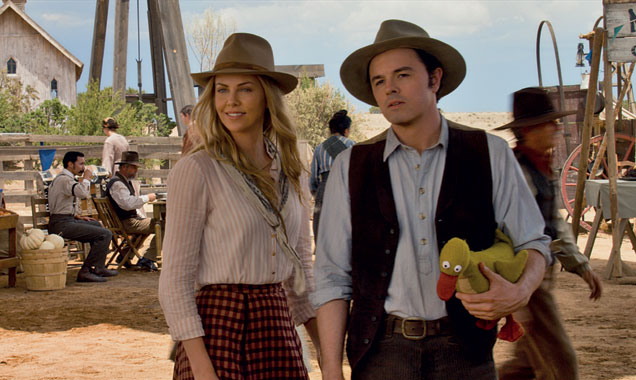 Not the diarrhea reaction shot I was looking for, but it’ll have to do.

Just as A Million Ways to Die‘s endless parade of toots undermines its actors, the writing also manages to find less-scatological ways to disrespect women and minorities. I went into the movie expecting to be offended, but I hoped something would distract from the representation of of Native Americans or Seyfried and Theron’s inevitable fight over a man — however, the story’s redeeming qualities are too few and far between.

Literal and figurative shittiness aside, A Million Ways to Die does have some merits. Theron and MacFarlane have a surprising chemistry that managed to (occasionally) transcend the stilted script, I was pleasantly surprised by some cameos, and the scenery was beautiful. That’s not snark, either–the alien landscape of the West is definitely one of the movie’s best attributes, and, as in Cosmos, the high production value just showcases the natural world’s grandiosity.

Too bad that reverence was undercut by the sound of MacFarlane’s flatulence. 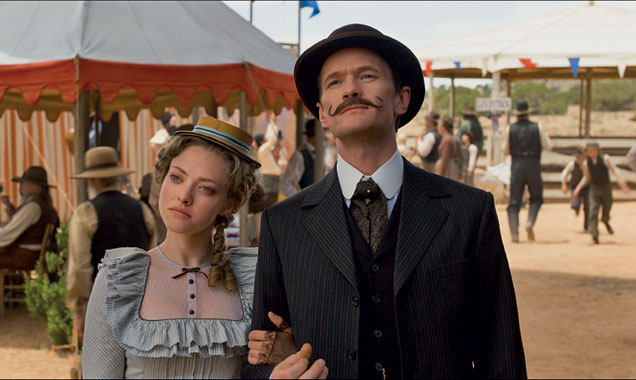 (Images via A Million Ways to Die in the West)

A Million Ways to Die in the WestfartsSeth MacFarlane