Godzilla Movie Review: How Does Godzilla Hold up for His 60th Anniversary Outing?

At least he didn't need 12 previous versions of himself like some long-running franchises. 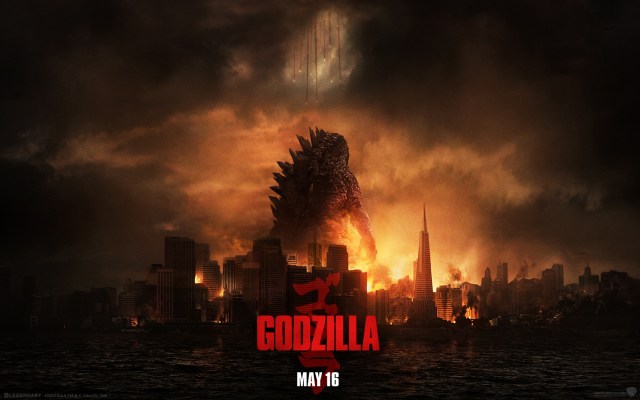 Prepare your radioactive breath and get ready to dive down into the depths of Godzilla. Guns! `Splosions! Kaiju battle! This movie had all of those things in abundance, so I’ll do my best to tell you what it got right, what it got wrong, and to do it all without spoiling more than I have to.

It’s hard to say whether the prequel graphic novel, Godzilla: Awakening, got my hopes up too high (because I really enjoyed it), so maybe I went into the movie with unrealistic expectations. The movie builds off of the story in the graphic novel, but it quickly goes in a very different direction that I wasn’t expecting. Though I enjoyed the movie and would still recommend that anyone who likes Godzilla should go see it, it wasn’t what I thought it would be, and that’s a hard shock to recover from in roughly 120 minutes.

In the prequel, the story centers around the life of a man who is searching for Godzilla and his struggle in trying to get a military organization to respect nature and “live and let live” with a giant monster. Being a nerd, the struggle of a noble scientist trying to protect mankind from its own hubris is the kind of story I can get behind, even if it’s not necessarily a story I haven’t seen before.

At the start of the movie, on the other hand, it seems like it’s going to go in the same direction, but it quickly shifts gears to focus on Aaron Taylor-Johnson’s character, Ford Brody. Ford is a military EOD (Explosive Ordinance Disposal) specialist whose skills conveniently come into play after his father is embroiled in a giant monster coverup conspiracy.

That’s where the movie finds its grounded human story to balance the repeated giant monster destruction, but it’s also where it runs into problems. Ford’s story has a fairly limited connection to the deeper themes about nature and violence in the movie. While it does say something that our hero is actually in the business of disarming weapons, Ken Watanabe’s character (Dr. Serizawa) is the one who gives us painfully brief insights into the larger moral struggles the story tries to address.

Unfortunately, Serizawa’s “Monarch” monster hunting operation, which featured prominently in the graphic novel, is swept aside quickly in the movie and supplanted by US military. They’re able to track the Godzilla a little too well to allow for any big feelings of surprise, and there’s hardly any internal struggle as to how the threat is best dealt with. Serizawa still has his concerns, but he doesn’t play an active role in how the plot takes shape.

“But it’s a Godzilla movie!” I’ve heard others use this line of reasoning to say that we shouldn’t judge the movie too harshly, because you shouldn’t judge a movie for something it was never trying to be. That’s true, but in this case, I find that defense a little thin, because this movie is definitely trying to be something more than just a monster movie.

I can certainly speak for myself—and I think it’s fair to speak for Gareth [Edwards, the director] in this—we love genre movies that have something to say. Ones that use the genre as a means for exploring interesting ideas—for coping with some primal fears that we have as humans. That’s both what they’re good for, and also, it’s when they resonate the most. It’s why the films that we gravitate to the most are the ones that hit home and resonate at a real gut level.

And he’s right. Those are the best kind of genre movies, and even if I don’t think this movie fully attains its loftier goals, it’s certainly better for trying. If it were just trying to be a brainless monster movie, we’d have gotten another 1998 Godzilla, and nobody wants that.

I would’ve preferred a greater focus on Serizawa, which would have been much more in line with the prequel as well as more of an homage to the original Godzilla. In the original, Dr. Serizawa is developing a super weapon that can defeat Godzilla, but he doesn’t want to use it unless it’s absolutely necessary, because he’s afraid of what it could do to the world once everyone knows about it. (Sound familiar?)

Ken Watanabe’s performance is great, and though he has fewer scenes than I would have preferred and not a whole lot of lines, his expressions and how he plays the part say a lot in his short screen time.

Though I personally found Serizawa more interesting in his relation to the film’s higher moral themes, Taylor-Johnson is also great in his role, as are the rest of the cast in theirs. It’s almost hard to believe he’s the same person from Kick-Ass, which is probably due to his training with a real life marine that stretched from a few months before shooting began and all the way through the production.

On the other hand, the, “It’s a Godzilla movie,” crowd isn’t 100% wrong, so let’s talk about the monster action. Gareth Edwards drew on years of established monster movies to set the pacing for Godzilla, saying:

I think the risk with showing [Godzilla] too soon is that people can get bored and fatigued, and I was more worried about that than I was the opposite. So, I list all my favorite films like this: Jaws, Close Encounters, Alien, the original King Kong.

They all have something in common, which is they all really take their time to slowly milk the reveal of the creature in glimpses. They’re so effective and powerful, and they’re such classic movies that why wouldn’t you want to use that blueprint?

There’s a temptation to just throw everything all the time and turn everything up to number 11, and I just think you’ve got nowhere to go after that.

He definitely had the right idea in not letting the audience get fatigued, but he might also have taken it a little far in the other direction. While there’s plenty of destruction at the hands of the mighty forces of nature, it starts to feel a little stop-and-go after a while. In most of the Godzilla-heavy scenes, there’s a lot of buildup, but then the payoff is brief, and it starts all over again with each subsequent appearance.

Edwards’ heart was in the right place, but the repeated teasing and revealing creates its own form of fatigue and prevents the destruction from feeling like it has much weight to it, because it constantly feels like there’s a bigger, pivotal battle scene waiting right around the corner.

Of course, the movie also has its bright spots. The effects look great (despite the fact that I still think most CGI dinosaurs/dragons have skin that moves just a little too smoothly) and seeing Godzilla come at you with modern 3D technology has exactly the awe-inspiring effect you’d imagine. The cast is great all around, and despite the stuttered pacing of the reveal, Godzilla brings all the ruckus and atomic breath you’d expect.

There were cheers and applause in the theater every time he let rip with his roar, his fire breathing, or any of the other classic Godzilla moments that fans were expecting. The roar sounded familiar while still being updated and fitting of the new Godzilla (though I couldn’t get Edwards to give away the sound team’s secrets on how it was made). The use of different locations and the story taking place on both sides of the Pacific was a nice touch.

Of course, as I said, this movie is trying to be something more than a monster movie, which is why it deserves all of this thought in the first place. If it were just another monster movie, I’d say, “It’s about giant monsters blowing stuff up. If you want to see a movie about giant monsters blowing stuff up, go see this,” and that would be as deep a thought as I’d give it.

There’s more to this movie, though, and it could have been really great with just a little bit of fine tuning. As it is, I enjoyed it, but it didn’t quite turn out to be what I was hoping for. On the up side, there’s no obvious sequel-bait scene at the end unlike pretty much every other movie anymore, so at least it stands on its own and tells the story it wants to tell from start to finish, and that was pretty refreshing in itself.

You don’t have to take my word for it, though. Go see it for yourself when it comes to theaters on May 16. If you’re a Godzilla fan, there really isn’t a better way to celebrate Godzilla‘s 60th anniversary.