Review: AIRPLANE VS.VOLCANO, From the People Who Brought You Sharknado

But seriously, where are the sharks? 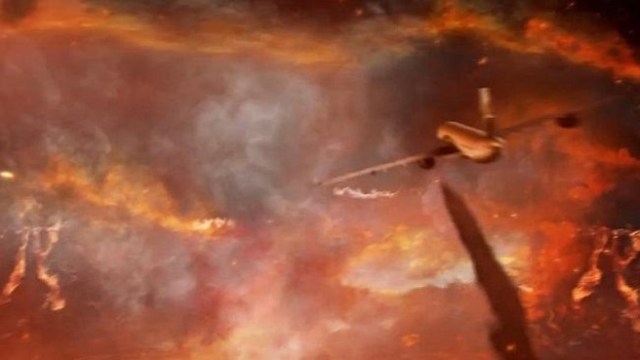 I don’t know much about airplanes or volcanoes, but I did watch AIRPLANE VS VOLCANO, the movie so nice they named it in all caps. My knowledge of aviation and geological phenomena are still basically nil, but I learned a lot from Asylum‘s latest mockbuster about sexual tension, explosions, and true love.

It’s a tale as old as time: a passenger plane gets caught on autopilot in a ring of fire as a series of volcanoes unexpectedly erupt around Hawaii. American heroes both on land and sea must fight to stay alive in the “7th circle of Hell.” Here’s the trailer so you can get a taste of the kind of sweaty drama the movie offers:

Why is Air Marshal Kirkland so suspicious of Dean Cain? Superman obviously knows how to fly, dude!

Perhaps it’s my crippling fear of planes that made me take this mockbuster a little more seriously than Sharknado or any of Asylum’s creature features. It could also be that AIRPLANE VS. VOLCANO‘s acting and special effects are a huge improvement on the infamous plane scene in Mega Shark vs. Giant Octopus, but I was genuinely invested in the passengers’ plight. Never fear, though: there are plenty of laughable moments for lovers of so-bad-it’s-good movies to treasure.

Several silly lessons I learned from watching? If you don’t want to marry someone within a month of meeting them, your relationship is doomed, the person who sounds the most like Tommy Wiseau is the person most likely to betray you, and volcanoes are powerful…but not as powerful as love. 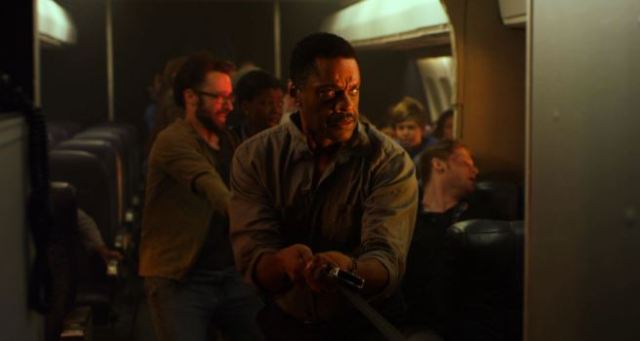 Poll: guy in the background, dead or sleeping?

Dean Cain stars as Rick Pierce, an off-duty pilot who heroically takes charge of the flight—and the heart of aptly-named airline steward Rita Loss (Tamara Goodwin). The two steam up the cockpit with their smoldering glances, charging the most bizarre meet cute ever with hilarious eroticism.

While Rick fights to keep the plane from “being cooked,” a geologist back on land (Robin Givens) tries to convince army personnel that a natural disaster of epic proportions is heading Hawaii’s way. An Army colonel (Mike Jerome Putnam) has something up his butt sideways, fireballs eviscerate innocent soldiers, and the beaches of Hawaii are turned “into Pompeii” (cue horrifying shot of mother and daughter being preserved forever in volcanic ash). It’s all confusingly emotional and everyone sweats a lot.

It’s saying a lot about my hormones that a movie with the tag line “FLY LIKE HELL” brought a tear to my eye, but I’ll admit I was invested and more impressed with the acting than I have been by other Asylum offerings. (Although, I’m sorry Tara Reid, you and your shark monologue are not the stiffest of competition.) I wish AIRPLANE VS VOLCANO had offered a few more “wait a minute. what just happened?” moments, but Mega Shark vs. Mecha Shark, a probable Pacific Rim knockoff on Netflix, has that market cornered.

AIRPLANE is available on demand now and will be exploding onto DVD in May. Watch it with other human beings to avoid my bewildering emotional reaction (little kid actor crying=Carolyn crying too). And definitely don’t watch it on a plane. I’m 90% sure that a real aircraft wouldn’t be wired like that, but the other 10% is mega-disconcerted.