Space Farts Could Be Silent But Deadly Astronaut Killers

Houston, we have a problem. A butt problem. 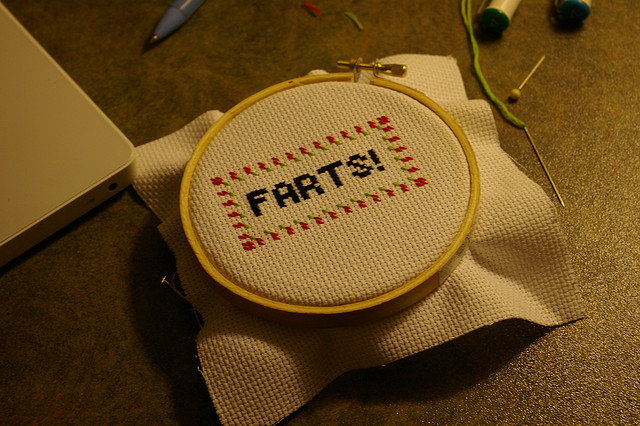 Given the recent resurgence of interest in the cosmos, it’s natural for us Earthlings to worry about the safety of the men and women bravely exploring the final frontier. But are we concerned enough about space farts? The risks posed by flatulence in a confined area are more than just hot air.

Discovery desperately wants the public to be informed about the invisible risk zero-gravity gas attacks pose to astronauts. A study from 1969 entitled Intestinal hydrogen and methane of men fed space diet (clench those buttcheeks, ladies!) examines the dangers of letting one rip in an enclosed and pressurized space:

Intestinal bacteria form two gases, hydrogen (H2) and methane (CH4), that could constitute a fire hazard in a closed chamber. So H2 and CH4 pass from the anus but these gases are also transported by the blood to the lungs and removed to the atmosphere.

To discover how to prevent farty astronauts from producing large amounts of flammable gas, the researchers examined two 6-man control groups for 42 days. One group was fed an unspecified diet of “space food” and the other was given bland earth meals.  Afterwards,

Breath and rectal gases were analyzed during the first and final weeks. Flatus gases varied widely within dietary groups but much more gas was generated with diet S than with F.

In the first 12 hours of recording data alone, subjects who were fed the 1960s version of space food produced up to 209 ml of rectal H2, which is a lot of fart juice. By measuring the amount of “breath and rectal gases…analyzed” the team concluded that the maximum amount of rectal H2 that should be accumulated during a twelve hour period is 382 ml, but that “volumes would be larger at reduced spacecraft and suit pressures.”

The researchers also allowed for the “psychic and somatic conditions that affect the gut”, i.e., nervous farts. Although the study doesn’t explain how stress levels were quantified, it’s a safe assumption that knowing their every butt murmur would be measured did nothing to quiet the gastronaut’s nerves. Regardless, perhaps the effect of mood on flammable rectal gas production explains the fire in Gravity?

Speaking of the model of international cooperation that is the ISS, an unexamined risk of space flatulence is the danger it poses to world peace. With Russia and US relations on Earth so tense, the last thing our embittered countries need is a “they who smelt it dealt it” controversy in orbit.

The bottom line is that even though space is full of giant floating balls of gas, if you’re an astronaut it’s best to leave all that methane to celestial bodies. Just because in space no one can hear you fart, doesn’t mean you should — Cosmos already has a beautiful soundtrack.