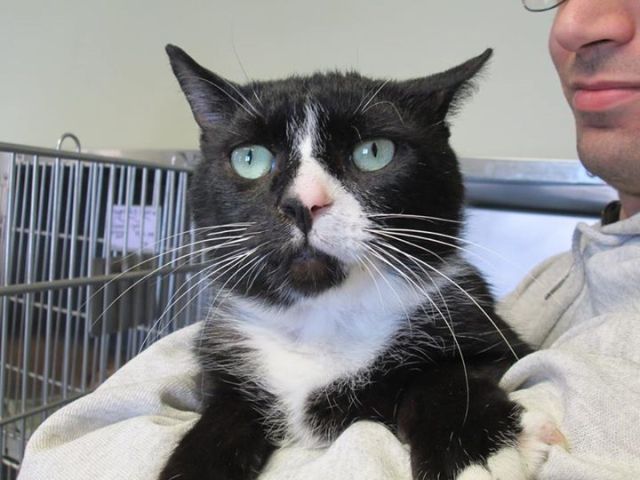 The story of Lenny the cat has a happy ending, unlike his explosive digestive tract: the smelly cat has finally found a forever-home after being abandoned in a park, one failed adoption, and numerous alleged feline farts.

Lenny was brought to Scottsville Veterinary Adoption in February after a year of living in a park in Rochester. He was quickly adopted but returned after just two days with a note saying he “farts too much” and would be better suited to a life outdoors due to the length and frequency of his gas attacks.

Hello! I was returned today because I fart too much. I am hoping I can find a person who can love me even with my stinky farts. I am a 19 month old neutered male and would love to be your smelly cuddle cat. I am very friendly and love to be petted and held. I even am wearing a tuxedo so I’ll look snazzy if you come to see me.

The post made Lenny a minor local celebrity and prompted many Facebook users to ask if they could also return their flatulent significant others. Thankfully, the Democrat Chronicle is reporting that the “surrendered, gassy” cat found a new home on Monday. Almost four days and counting. Don’t “blow” this one, Lenny!

Kudos to Scottsville Veterinary Adoption for sticking to a “no kill” policy. Lenny’s farts may be deadly, but thankfully, he’s still alive.

(via Neatorama image via Scottsville Veterinary Adoption on Facebook)