5 Over-the-Top Ways to Get Around While Going Green 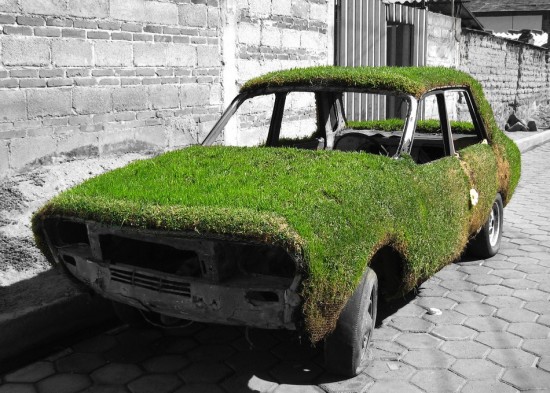 We’re living in an interesting time, where efficiency has become paramount for modern vehicles. Not only that, the ultra-efficient green vehicles that were once pipe dreams are actually becoming reality. But let’s set aside the simple and the small and take a look at the big and the bold — like a car that runs on coffee, or spaceships propelled by lasers. Here’s a thoroughly less-than-scientific look at alternative forms of green transportation. 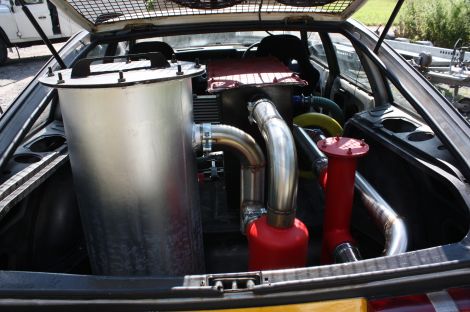 While many of us use coffee to get going in the mornings, rarely has it been used in the gas tank of a car. However, a process called “gasification” makes it possible to run your car off of coffee grounds. This modified vehicle heats the refuse to a staggering 1,292º F. At this temperature, it releases a mixture of hydrogen, carbon dioxide, carbon monoxide, and methane which is then burned in the engine normally.

Of course, all that work won’t get you going very fast. The speed record for a gasification vehicle is 66.5 mph, well below the speed limit in some states. Obviously, it also requires a fair amount of energy to heat the grounds to that temperature and — perhaps more troubling — a fair amount of coffee. Of course, though coffee is a renewable resource, it also comes at a premium and generally requires a large input of land, water, and labor to grow.

For some high-powered coffee drinkers, it might actually make sense to use their leftover coffee grounds for propulsion. For the rest of us, it’s just a clever and illustrative alternative form of transportation. 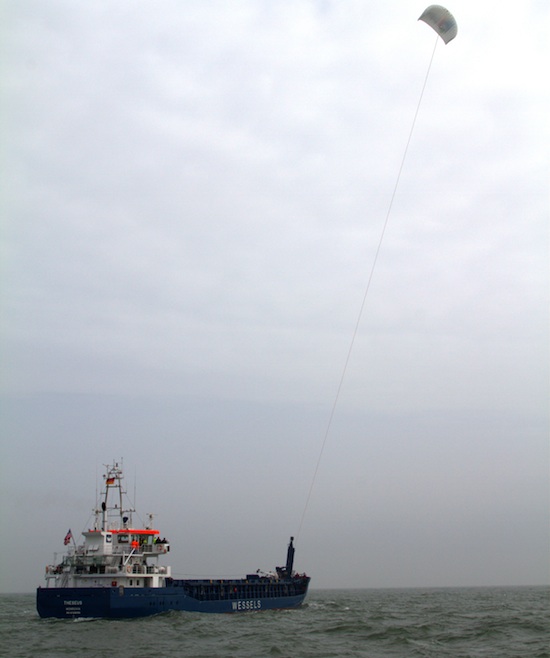 Sailboats have largely fallen out of favor as a means to propel large merchant craft, being relegated to the realm of pleasure boating and historical reenactments. However, some believe that sails might actually have a place propelling enormous super tankers across the ocean .

The company SkySails has already launched one ship, the 433-foot long MS Beluga SkySails, which has a 1,700 square foot kite. When flying, the enormous kite pulls the Beluga, reducing fuel consumption by an average of 15-20%.

So far, adoption of the SkySail scheme has been limited. However, the idea has started people thinking differently about how to move enormous amounts of cargo across the ocean. A competitor, KiteShip, is working on a 50,000 square-foot kite for oil tankers, and the University of Tokyo is looking into the possibility of using enormous, telescopic aluminum sails to catch the wind on oil tankers.

Though it’s still a bit of an anachronism in the mainstream, wind-powered ships may soon be making a comeback. 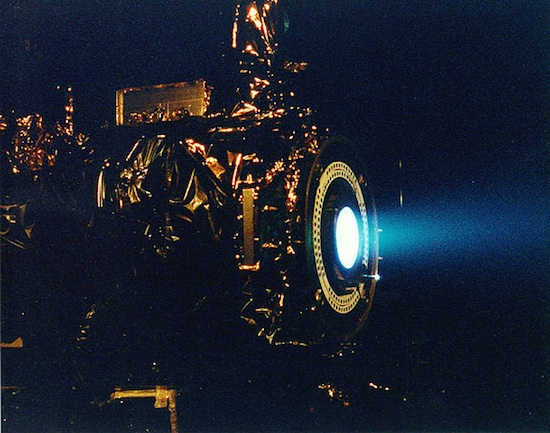 Just saying “ion thruster” immediately brings science fiction to mind, but a few have already been used in space since 1968. The most recent was the Gravity Field and Steady-State Ocean Circulation Explorer satellite launched in 2009, but perhaps the most notable was the Japanese Hayabusa which met with and returned samples from asteroid 25143 Itokawa.

The principle behind an ion thruster creates thrust by accelerating ions — which are minute, charged particles — to high speeds. Because ions have a charge, there are a number of ways to coerce them into motion. However, because they are so tiny, even very fast moving ions provide small amounts of thrust. The advantage of the ion engine, over the much more powerful chemical rocket engine, is that it can produce continuous thrust over long periods of time using very little fuel. Also, it mostly relies on electricity, which can be easily produced by solar power.

Because of the small amount of thrust, ion engines are currently best used in the low-gravity environments of space. Far from being a drawback, this makes them all the more amazing, and could see wider adoption in the realm of planetary exploration. An upcoming project a bit closer to Earth plans to attach a 200 kW ion thruster to the International Space Station. Once in place, the thruster could help boost the orbital station and counteract the atmospheric drag it experiences.

(image of a 1998 ion thruster test firing via Wikimedia) 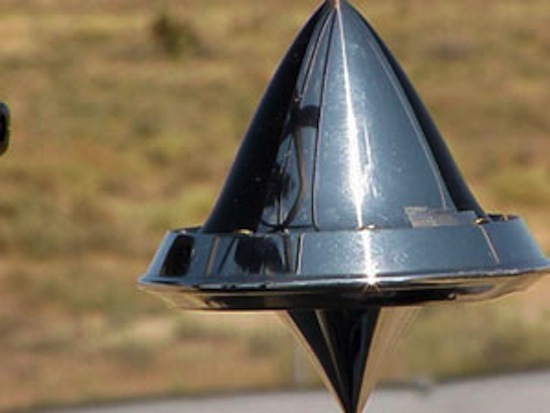 At Geekosystem, we’re big fans of lasers. You can send information with them, you can break things with them, and you can even confuse small animals. However, high-powered lasers can be used for something far more interesting: Propelling small, conical craft into the sky.

The current altitude record for a laser-propelled craft is Leik Myrabo’s appropriately named Light Craft. His test vehicle is dead simple; a conical piece of metal with a highly polished bottom section that acts as a mirror. To fly, the light craft is first spun up to 10,000 RPM using compressed air. Then, a high-powered pulsing laser is fired at the underside of the craft. The laser rapidly heats the air beneath the craft, causing it to violently expand. This creates a shockwave, and propels the craft upward. It’s a little hard to imagine, so here’s a video.

Though extremely cool, this also has some major drawbacks. In the first case, it has never been tested with large scale models and even the small scale models have never flown higher than 236 feet. What’s more, a high-powered laser unsurprisingly requires a large amount of power. While the craft itself is small, light, and uses no fuel, it still has to get its energy from somewhere.

Though the LightCraft has proven itself in the small scale, the project seems to have largely stalled out. Perhaps we’ll see it again, someday, but for now it’s another interesting idea that lacks practicality. 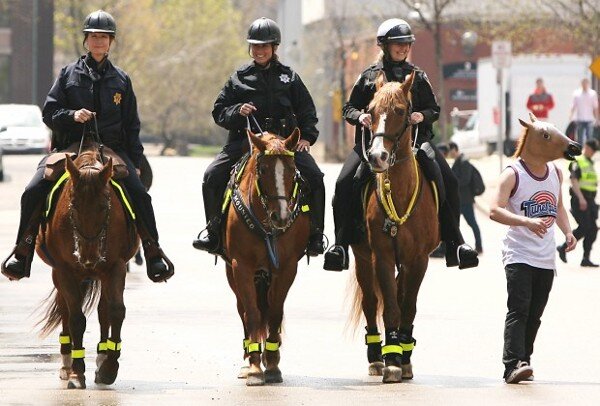 When it comes to cheap, easy, and totally green transportation, you cannot do better than pack animals. Horses have already reached a high level of development, having been domesticated since around 3,500 B.C.. There are already numerous developers in the horse industry who have perfected techniques for riding, training, and keeping horses.

Additionally, the power infrastructure for horses — namely grass, dried grass, and oats — is already in place and available for purchase. Or for free on any given grassy verge. Better yet, horse fuel is completely sustainable.

Of course, no form of transportation is completely waste free. Though the waste product produced by horses is relatively large, odiferous, and frequent, it is extremely easy to dispose of. It can be used to create more fuel (read: grass) and also be used to produce electricity for your horseless carriage.

While these ideas are over-the-top, there are many companies working to bring green technology into your home. Like the Lincoln MKS, which provides luxury experience and high performance with greater efficiency. Lincoln’s EcoBoost technology gives drivers the power of a V8 with the fuel economy of a V6, making it easier on your wallet and the environment without compromising on performance.

(top image via yo lola)