A Car That Runs on Poop 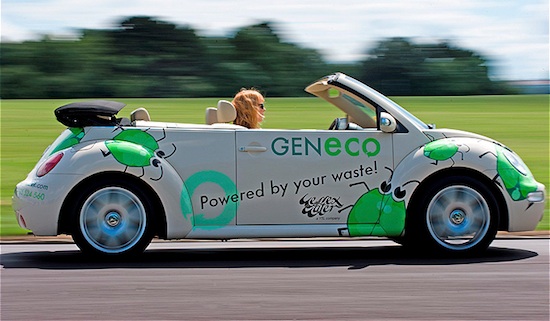 Yesterday, British sewage treatment company Wessex Water unveiled a car that runs on poop. The new Bio-Bug is a Volkswagen Beetle powered by methane biogas generated from fermented human waste, and according to the Bristol-based company, the fartmobile can travel 10,000 miles annually on waste collected from 70 households! Keep on poopin’ for your mileage, folks.

“We have been producing biogas for many years,” employee Mohammed Saddiq told the Telegraph — “with a straight face,” New York Magazine adds snidely. “With the surplus gas we had available we wanted to put it to good use in a sustainable and efficient way.” In a separate interview with The Sun, Saddiq claimed that these new vehicles could “blow away” the electric car model.

There’s also profound symbolism in choosing the Volkswagen buggy, Saddiq noted. “We thought it would be appropriate that the poo-powered car should be the classic VW Beetle Bug because bugs naturally break down waste at sewage works to start the treatment process which goes on to produce the energy.”

Lord Rupert Redesdale, chairman of the Anaerobic Digestion and Biogas Association (completely real) and perhaps one of the few, bold nobles unafraid to admit the human tendency to produce flatulence, said:

“This is a very exciting and forward-thinking project demonstrating the myriad benefits of anaerobic digestion (releasing energy from waste). Biomethane cars could be just as important as electric cars.”

Though Redesdale notes the biomethane would be a sustainable alternative to fossil fuels, there has been concern over the last decade as to whether similar methane generated from cow farts and burps has in fact been a serious contributor to global warming.

The biogas vehicle is reportedly the first gas-powered car that does not suffer reduced performance, running at a top speed of 114mph. If trial runs are successful, Volkswagen may consider converting some of its fleet to utilize this new source of energy. No news yet as to whether the car will smell atrocious.