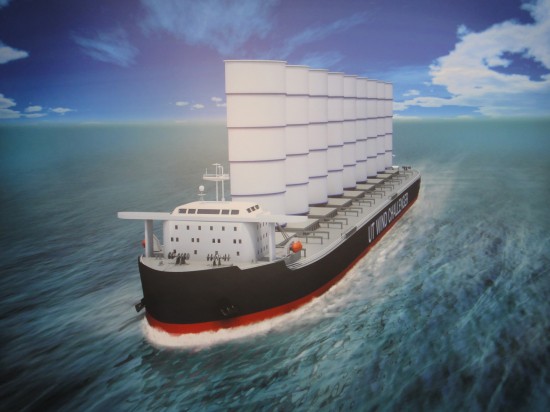 Normally when we bring you a story from DigInfo, it’s a crazy Japanese project to bring you something no sane person would want. This research project to place enormous retractable metal sails on large merchant ships, however, is actually quite a good idea. The supporters of the project say that a hybrid ship, using both wind and conventional engine power, could reduce fuel consumption by 25%.

Kiyoshi Uzawa from the University of Tokyo, and an associate professor attached to the project, said that this modern take on traditional sailing ships would deliver savings to shipping companies and make international shipping greener in the process. Shaped like an aircraft wing, these hollow sails are comprised of aluminum and fibre-reinforced plastic, so that they can be raised and lowered as weather permits. In their research, the team simulated trade routes between the U.S. and Japan and found that hybrid ships could see major fuel savings.

While impressive, it’s not the sails alone that make this idea really work. To best realize the potential of the sails, each is controlled individually by computer to find the optimal positioning. Also, the course the ship sails would be plotted using networked information about sea conditions and the weather to make maximum use of the wind. A hypothetical hybrid ship would then chose a course that might be geographically longer, but allows the ship to travel faster and consume less fuel.

Of course, such a bold design wouldn’t come cheap — nor has it been tested outside of computer simulations. Uzawa told DigInfo:

These sails cost about US$2.5 million each, but they can reduce fuel consumption by over 25%. In that case, the cost of these sails can be recovered in 5-10 years. We’ve finished our basic research, so over the next two years, we’d like to build a half-size prototype, to check that this structure is practical.

While it may seem technologically regressive to bring sails back, this kind of design is not unprecedented. SkySails, for instance, has proposed retrofitting existing vessels with enormous kites to realize fuel savings and to serve as an auxiliary form of propulsion.

Uzawa says that they’re hoping to test the concept by 2016, but even if successful they may have a hard time convincing shipping companies to embrace their ideas. While fuel costs are rising, $2.5 million per sail may be a bit steep. We’ll just have to see if this idea ever makes it off the paper and onto the waves.