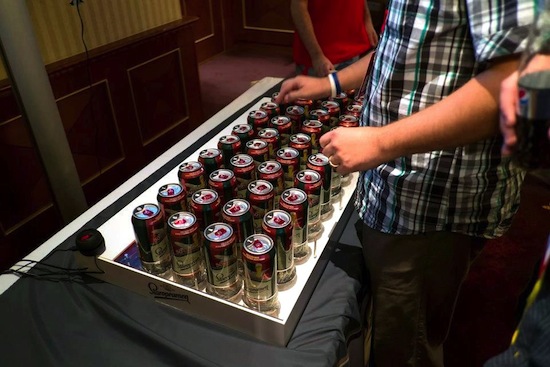 No matter how well-designed they are, keyboards are, on the whole, pretty boring as far as gadgets go. There’s only so much you can do when the composition and arrangement of the keys are standardized, right? Wrong. The mad scientists at Robofun Create found a way to make keyboards fun again. How did they do it? They replaced the keys with cans of beer.

Making its debut at Webstock 2012 last month, the Beer Can Keyboard uses 40 unopened cans of beer for keys. To type a letter, gently press down on the top of the corresponding can. The cans sit on an Arduino board, which is connected to a Raspberry Pi. Czech brewery Staropramen, a Webstock sponsor, provided beer for the project.

Regardless of its functionality, It’s just comforting to know that I’m not the only person whose been dreaming of a meaningful way to bring computers and beer together.