Somebody is Trying to Sell an “Xbox 720” DevKit on eBay 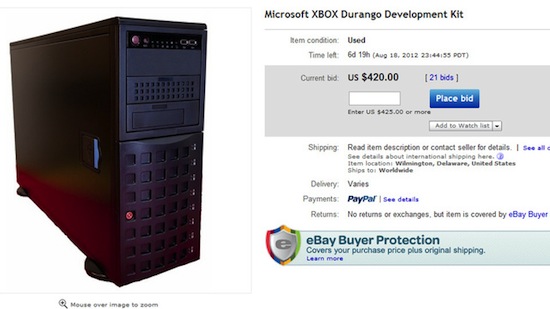 Want to make your own next-gen Xbox game? Well for the low, low price of $11,101 (as 12:34 PM EDT) you can bid on eBay for what may very well be a development kit for the Xbox 720, a.k.a. “Durango.” Rumor has it that certain developers have had access to devkits for the technically unannounced next-gen console since February, so it’s not entirely impossible that this could be the real deal.

Earlier this week, seller SuperDaE released photos of the kit on Assembler Games, a small developer forum, and then an image of data taken by the Kinect 2, which may be released as part of or alongside Microsoft’s upcoming console. While both remain officially unverified, some media outlets have reported that both the kit and the image appear to be the genuine article.

Of course, even if those were legit, that doesn’t mean what has now appeared on eBay is as well. Case in point: The physical “kit” doesn’t look particularly interesting. It’s basically just a black PC tower. On the other hand, since these things were never meant to see the light of day, why would Microsoft bother to make it look special? That’d only call attention to something they’d rather not have seen at all.

Just in case you’re actually considering trying to buy the thing, you should know the seller has been turning down bids from people who they think might not make good use of the devkit; “I only expect people who know what it is to buy it. Otherwise you have no reason to bid,” he tweeted earlier today. The fact that they’re being so snooty about who buys the kit just makes it that much more tempting.