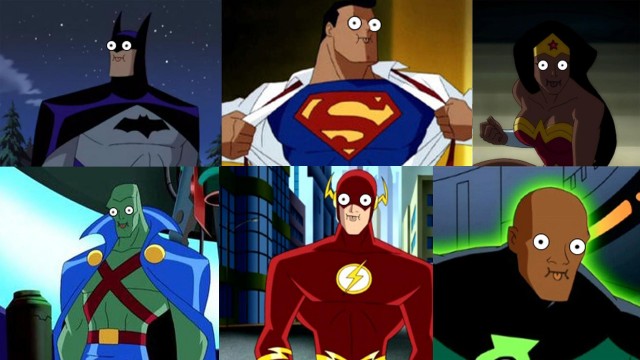 Were you hoping you’d see The Rock punch Henry Cavill in the face? You just might get your chance.

In a post on their blog, DC Comics wrote, “With a new year on the horizon and the holidays upon us, it’s a good time to take a look back at 2014 to remember and remark upon a few of its key DC Entertainment moments. Some of these moments played out on the comic book page or the screen, others were real-life happenings that shaped what we’ll be reading and seeing over the years ahead. ”

Then they got into one of those moments—the day Warner Bros. announced the upcoming DC film slate which included solo Wonder Woman and Cyborg movies along with Suicide Squad, two Justice League films and more. However, since this reveal was given at a boring investors meeting, we didn’t have any details as to whether or not all of these films would take place in a shared universe much like Marvel Entertainment’s MCU. But now we think we have an answer:

Yes, there were rumors of some sort of film slate, mentions that Warner Bros. had “big plans” for DC Entertainment and occasional informal announcements (like the news that New Line had a Shazam movie in development). But for fans who were hoping to see a DC Cinematic Universe similar to what they’ve seen from other publishers, one that included super heroes other than Superman or Batman, there didn’t seem to be a lot to talk about.

That changed on October 15, 2014, when Warner Bros. revealed a full slate of ten DC Entertainment feature films all set within the same universe. The list included the movies we were hoping to see—Wonder Woman will get her own film, while the Justice League will get TWO movies. However, it also included quite a few surprises. A standalone Cyborg movie! A Flash feature starring Ezra Miller! A Suicide Squad movie! And coming in 2016, no less!!

“Feature films all set within the same universe.” Well, OK then. No one actually said that before but I guess it’s really happening.