Congratulations with a side dose of "I'll be praying for you." 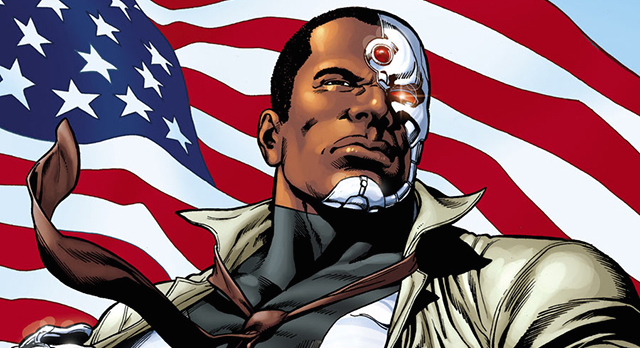 Looks like our new Cyborg actor is jumping into the deep end a little more than he thought he would be: according to an interview with Entertainment Weekly, Ray Fisher had no idea that he’d be headlining his own movie until mere hours before Warner Bros. announced their full superhero slate.

Pause so you can get your residual energy out about a Wonder Woman movie finally happening:

“I didn’t know the extent to which DC and WB had planned on taking my character,” says Fisher, who was hired in March to cameo as Cyborg in Batman v Superman: Dawn of Justice. “When I signed on, I just wanted to be part of this world. But that specific information, I found out then and there. I didn’t think I’d be getting my own stand-alone film.”

I think that’s unbearably adorable, but that might be because his use of the phrase “part of this world” sent my brain into Disney mode. It happens. Fisher was also in the running for a major character in Star Wars: Episode VII, probably whoever it is John Boyega is playing (chanting in the background: “Moses! Moses!”). Getting his own superhero film—the first superhero film starring a black man since 2008’s Hancock (unless Marvel gets off its ass with Black Panther really soon), at that—is a pretty damn good consolation prize.

Fisher already wrapped his Dawn of Justice cameo and will appear in The Justice League Part One in 2017 and a standalone Cyborg movie in 2020. Dawn of Justice, by the by, is his first feature-length movie. He’s mostly done theater before this, plus one short film.

In the immortal words of Christopher Lambert as Lord Rayden in Mortal Kombat: “Good luck… [pause for maximum drama] You’ll need it.”