And what do you do with a statue of Nikola Tesla that's also a Wi-Fi hotspot and a time capsule? Send it to Mars, of course. 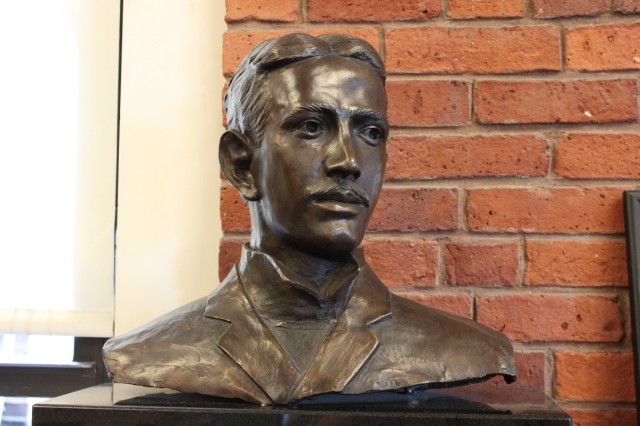 In spite of being dead, Nikola Tesla is having a pretty good year. His New York lab was just purchased by a group of admirers looking to turn it into a museum, he could be getting his own cartoon, and now there will be a statue built in his honor in Silicon Valley. And not just any statue — this one will double as a Wi-Fi hotspot, triple as a time capsule, and it could even be going to Mars in 2043.

The project comes courtesy of Kickstarter, and it just ended its campaign to raise $123,000 with a total of $127,260. That’s far from some of the blowout Kickstarter campaigns we’ve seen in the past, but we’re just glad they hit their goal and this thing is happening. I only wish I’d heard about it in time to contribute. There needs to be more statues of Tesla in the world, and I think we can all agree that there’s no good reason for every statue in the world to not be a free Wi-Fi hotspot.

Dorrian Porter is the man responsible for the statue. He says in the Kickstarter video that he first became interested in Tesla after a Google Doodle honored him. The first three minutes are pretty standard Kickstarter fare. Porter talks about the project, gives a little background and why he thinks it’s a good idea. Then at about the three-minute mark there’s a cartoon of Tesla pitching inventions to venture capitalists which is pretty great. The animation is clunky, but it’s still a cartoon of Tesla pitching to venture capitalists. Take a look:

It’s almost unfair to talk to about the Kickstarter rewards that were available. The campaign is over, so it’s too late to snag them, but they were offering smaller versions of the statue and other great rewards. You could have even scored Tesla cuff links. It’s an opportunity most of us missed out on, and must now forever regret — boats against the current, borne back ceaselessly into the past.

Besides offering free wireless Internet to the area around the statue, it will also serve as a time capsule storing artifacts from our time as well as predictions for the future. It will be opened in 2043, after which time Porter would like to see the statue sent to Mars, because sure — why not?

The highest contribution level was $10,000, and backers at that level could pick between being recognized as a “Time Traveler Patron” and select items for the time capsule, or they could choose for the money to get SpaceX as a sort of incentive to agree to send the statue. The Kickstarter page description of that level reads:

FOR THE BENEFIT OF SPACEX — SpaceX will have a right of first refusal to transport the Tesla Statue to Mars, subject to then published interplanetary carriage rates to be paid by Northern Imagination and mutual agreement of placement on new planet prior to shipment in 2043.

There was one “Time Traveler Patron,” but nobody opted for the SpaceX reward, so it’s not a definite planned mission to Mars. SpaceX could just as easily say no, but I feel like they might go for it. After all, they strapped a cowboy to their Grasshopper rocket for a test flight. Why not put Tesla on a rocket to Mars?

(via Kickstarter, image via mhmcfee)