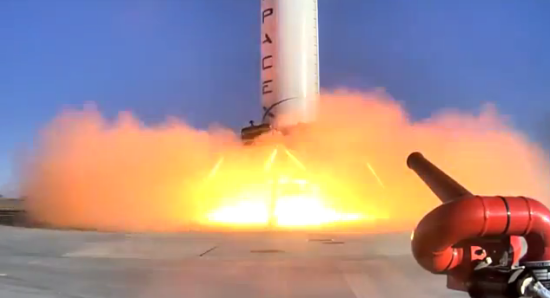 Since NASA retired its space shuttle program, there has been a big, rocket-sized hole in our hearts. Several private companies like Virgin Galactic are trying to fill that void, but Elon Musk’s Space X is really leading the way right now. Back in May of this year, Space X docked their Dragon spacecraft with the International Space Station, and over the weekend Musk tweeted photos and videos of a test flight of the new Grasshopper, their reusable rocket engine.

This is not the first test flight of the Grasshopper, but to date it is the highest, and therefore most awesome, flight. Its initial flight took it a mere six feet off the ground before landing safely — that barely qualifies as a jump, let alone a flight. So last month Space X sent it 106 feet in the air, which is as high as the rocket is tall. This latest flight put the Grasshopper 130 feet into the air for about thirty seconds before landing safely.

Another fun fact about the flight is that Musk attached a six foot tall cowboy figure to the rocket.The cowboy is a little hard to see in the video, but Musk tweeted a picture as well:

To provide a little perspective on the size of Grasshopper, we added a 6 ft cowboy to the rocket twitter.com/elonmusk/statu…

Musk said it was for a sense of scale relative to the rocket, but come on– if you’re launching a 106 foot tall private rocket engine 130 feet into the air, and then having it land safely right back where it started, you’d be a fool not to attach a six-foot-tall cowboy to that thing. We’re surprised this video doesn’t end with Musk dropping a microphone like Chris Rock and walking away.

Take a minute out of your day to watch the Grasshopper in action. Seeing the rocket hover takes a little getting used to for anyone used to watching traditional launches, but it’s really something worth checking out.