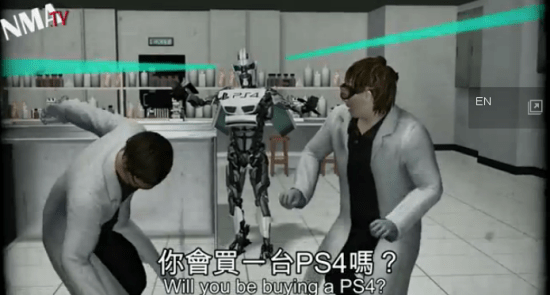 Sony didn’t give us a look at what the PlayStation 4 actually looks like during their event the other night, but it’s safe to assume it is not a human-sized robot that shoots lasers from its eyes. That didn’t stop the goodly folks at Next Media Animation from speculating as such. Their animated version of the event is borderline insane, and a lot more fun to watch than the event itself.

This video has it all: Explosions, laser-shooting robots, giant steroid needles, pooping, friends killing themselves over Facebook, PlayStation Vita-related vehicular homicide, more pooping, dragons, and teleportation. It is truly bananas, and absolutely worth your time.

I would like someone to adapt this video to a PlayStation 4 game that I could play, and I would also like the PlayStation 4 to look like the giant killer robot from this video. If you’re in a position to make either of those things a reality, please do so at your earliest convenience.