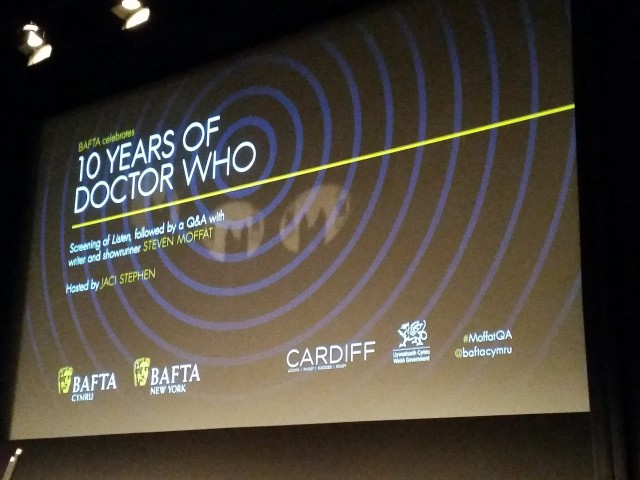 Last night, The Mary Sue attended a BAFTA celebration of ten years of (new) Doctor Who at the New York Institute of Technology. It featured a Welsh reception and a lovely toast to the media industry in Wales, a screening of the Season 8 episode “Listen,” and a Q&A with showrunner Steven Moffat.

“All kids loved Doctor Who,” Moffat said in response to host Jaci Stephen when asked about his relationship to the show at a young age, “partly because we thought it was the naughty children’s show in the sense that it was scary, it was definitely bad for you. It was a time when every other children show was sort of wholesome, and decent, and kind, and Doctor Who existed with the sole purpose of making you wet the bed.”

To be sure, “Listen” was one of the scariest episodes of the series in recent memory for this writer, but Stephen wondered if the creator keeps children’s fears in mind when he’s writing. He said:

The kind of fright or fear that Doctor Who produces is the kind you find in the nursery, you know. It’s not fear of going to the doctors and getting a slightly scary X-ray or any of these things that we’re all frightened of, it’s frightened of things in the dark and those are childish terrors. I mean, our entire audience is children it’s just some of them happened to have grown up. That’s the way Doctor Who works. It’s all about the childish terrors and it’s all about being quite positive about them because we fill our show with monsters but the show is about a man who can fight monsters without becoming one. Now what better message could you give than that? Yes, yes we have horrible, gruesome things going on in Doctor Who every second we can possibly make it available but that’s actually quite important for children to see because children have horrible, gruesome things going on in their heads. You sort of need to know, ‘Yeah, everyone’s got that. That’s ok. That’s ok.’ But children, with or without Doctor Who have monsters in their minds. Doctor Who provides the perfect antidote, the perfect man to fight the monsters with humanity and decency and kindness and intelligence and places a huge premium on things most heroes do not.

Without any prompting from yours truly, the discussion turned to Moffat’s portrayal of women on Doctor Who. “The women in this show have always been hugely strong and have always been kind of the main character, ” he told Stephen, “I know I get in trouble all the time for saying this but you cannot make a show about a man who sort of doesn’t really change, apart from his face and a dark personality, who sort of has no interior life, who is unimpressed by everything, you have to make it about the person he has the relationship with.”

She also asked him if there’d ever be a female Doctor:

There’s an aspect to it where you could say that if you made the Doctor female you’d lose a fairly unique rare role model, I’m not sure if I’m completely persuaded by that argument purely because I don’t think the Doctor is the role model of Doctor Who. He isn’t. Because you can’t really base yourself on the Doctor. He’s off the spectrum, barking mad, from space and has lots of mysterious abilities that we do not. How do you base yourself on that? The role model is actually the other character, his best friend, the person who deals with this out of control, overgrown schoolboy racing around the universe being rather too imperious and too interfering for his own good. … It’s a long and complicated argument and there’s no vacancy in Doctor Who and given the way Peter is talking about it I don’t think there will be for a very long while.

Considering Christopher Eccleston was in Thor: The Dark World, Karen Gillan in Guardians of the Galaxy, David Tennant is set for Netflix’s Jessica Jones, Benedict Cumberbatch is playing Doctor Strange, Martin Freeman landed a role in Captain America: Civil War, and Arthur Darvill is playing a time traveler for The CW’s Legends of Tomorrow (Did I miss anyone? Sheesh!), I decided to ask what Moffat thought of so many Doctor Who and Sherlock actors taking over the superhero universe. He said:

Maybe I should get a preview before anybody else [laughs]. What really pisses me off about it is they disappear for bloody months to make those movies. I just bang out a Sherlock in four or five weeks, they take six to eight months or whatever it is. It’s ludicrous. And then they have to go do twelve sequels and they get really grumpy about it and I’m saying ‘Yeah, and you’re unavailable for my show and I’m gonna get shit for Sherlock being late and that has nothing to do with me.’

So, you know, remember that next time you’re asking when the next season of Sherlock is going to air.