The Doctor Vs. Thor Christopher Eccleston Is The Villain In Thor 2 | The Mary Sue

The Doctor Vs. Thor – Christopher Eccleston Cast As The Villain In Thor: The Dark World 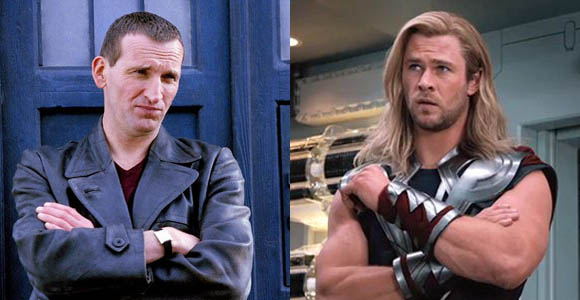 A Time Lord against the God of Thunder? Now that is a fight I’d pay to see and pretty soon, you’ll be able to! Doctor Who actor Christopher Eccleston has been cast in Thor 2, aka Thor: The Dark World. Hit the jump to find out which Marvel villain he’ll be playing.

You may recall, Mads Mikkelsen was originally set to play the villain in Thor: The Dark World but later dropped out. Now it will be Chris vs. Chris as Eccleston steps into the role opposite Chris Hemsworth. The villain? Malekith the Accursed, ruler of the Dark Elves of Svartalfheim.

To be honest, I’m a comic reader and this guy isn’t familiar to me either. Malekith the Accursed isn’t exactly a household name like Lex Luthor, now is he? Malekith was introduced in Thor #344 in 1984 and is part of a race of Dark Elves. Like Thor, they possess superhuman strength, speed, agility, etc. In the comics, Malekith has used the Casket of Ancient Winters, an artifact which causes the owner to grow younger, and something you may remember seeing in Odin’s weaponry (and used by Loki) in the original Thor film. And yes, Malekith and Loki have been known to work together on occasion. Using magic, he can also teleport, project energy, and create illusions, though he’s vulnerable to iron.

Of course Eccleston isn’t only known for Who. He’s had roles in 28 Days Later, G.I. Joe: The Rise of Cobra, and Heroes. But I know there’s going to be a large segment of the Thor sequel viewing audience who will be waiting for the actor to reach for his sonic screwdriver while fighting Hemsworth. And perhaps, even rooting for him to win.