The lawmakers on Capitol Hill are running out of ways to get people on board to vote for the U.S. Senate’s highly controversial Stop Online Piracy Act (known as the Protect-IP Act in the House of Representatives), so now they’re claiming that those scurvy-ridden internet pirates have completely obliterated the film industries of several countries, including Sweden. Sweden, a country that has apparently not produced any feature films since the advent of the internet … except for, I don’t know, Let the Right One In, the entire original Millennium Trilogy, you know. Nothing anyone’s ever heard of … if they are living under a Washington Monument-sized rock. Or they’re just lying. But here’s the good news: one lawmaker has a great idea to make this bill seem really unsavory to support: porn.

First, we’ll talk about this not-just-dubious-but-blatantly-false claim that internet piracy has left foreign film industries in ruins. During an event sponsored by the Center for American Progress, Chris Dodd, a former U.S. Senator from Connecticut and current CEO and Chairman of the Motion Picture Association of America (MPAA for short), claimed that “The entire film industry of Spain, Egypt and Sweden are gone.” All because of the availability of content on the internet and the ability of some to usurp copyright laws and obtain it illegally.

This is what SOPA’s supporters are trying to convince people: That original creative content on the internet is at risk of being disseminated and consumed by people who didn’t pay for it, and that this bill is out to protect the people who create that content. However, as I wrote when news of this bill came to light, this bill is actually an overreaching perversion of that goal. Rather than just say, “Hey — stop downloading feature-length movies, that’s not cool,” the federal government wants to go after people who post any kind of copyrighted content and shut down web sites that do the same. The extra fun-slash-terrifying part about all this is that could mean anything depending on the mood of whoever is executing the law, should it become law. And some people might be at the risk of going to prison for up to five years.

As you can imagine, a lot of people have been finding this extremely controversial and troublesome, and the bill in both its forms is losing support, fast. So now, Chris Dodd is saying that if we don’t pass this bill, it will mean the end of the film industry in the United States because the film industries in Sweden, Spain, and Egypt have gone all kablooey and disappeared because of evil internet users.

Except they haven’t. At all. In fact, they’re not only still comfortably existing, they could be considered thriving. Techdirt has linked to an interactive map on ChartsBin that shows the number of feature films made by individual countries in the year 2008. Supplemented by some 2009 data from the United Nations (at UNESCO), it appears that the countries in question are actually doing quite well.

Egypt: “The latest UN data shows Egypt produced 46 films in 2009. Not bad. But perhaps it used to be much bigger? Oh, whoops. 1996 (the earliest data available) shows that Egypt produced 24 films that year. So it looks like the industry has about doubled.”

It should also be noted that according to the same data, Spain actually places in the top 10 of the world’s biggest movie producers. The biggest producers are India, Nigeria, and the United States. Also in the top 10: China, Japan, South Korea, Russia, Germany, and France.

You might be wondering what lawmakers who don’t support SOPA — and there are many — are doing about it. One Congressman, Rep. Jared Polis (D-CO) thought he’d do his best to hit this bill with an ugly stick so no one would want to support it. What did he do, exactly? He proposed an amendment that would exclude pornography from any of these protective dealings. That’s right: If this amendment were to pass, SOPA would allow porn to run free and naked all over the internet, and no one could do anything about it. (In other words, just like it does right now.) Here is the text of the heroic amendment: 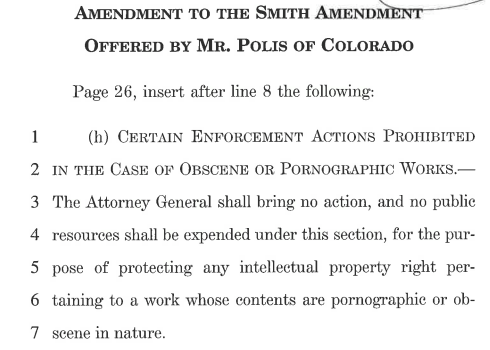 As you can imagine, this failed. However, it did waste everyone’s time, and that’s why there was no vote on SOPA this week. It is now rescheduled for Wednesday. But you know what else Rep. Polis accomplished? He got the lyrics for this song from Avenue Q in the official Congressional record:

For more details about SOPA, we urge you to follow The Mary Sue for more updates. Also check out these stories at Geekosystem:

(Techdirt via Boing Boing, The Daily What)